The Jaguares claimed a massive scalp when they defeated the Lions 49-35 at Estadio Jose Amalfitano in Buenos Aires on Saturday.

The Jaguares were one of the only sides to beat the Lions last season and they have managed to repeat the feat this campaign.

The Jaguares immediately took control of the tie from the kick-off and scored with just 50 seconds gone on the clock. Pablo Matera sliced through the hole on the outside of Lionel Mapoe and ran 40 metres before drawing the final defender and timing his pass perfectly for Bautista Delguy to cruise in under the posts. Nicolas Sanchez made no mistake with the conversion.

Sanchez then extended the lead to 10-0 with a penalty. But the Lions began to take control of the game and were rewarded with their first try after the Jaguares were guilty of collapsing the maul. The Lions opted for touch and the driving maul again, and this time there was no stopping them as lock Marvin Orie went over at the back.

Soon after, the Lions took the lead when Sylvian Mahuza made a scintillating break before being halted by an ankle tap, getting up and managing to reach out for the one-handed finish despite the attentions of a defender.

But they were pegged back by the Jaguares shortly afterwards. A couple of powerful carries from the forwards got them the go-forward ball they needed, drawing defenders to the breakdown before suddenly shifting the ball wide out on the left touchline where Emiliano Boffelli was on hand to produce a one-handed finish of his own, doing brilliantly to stay within the field of play for a 15-14 lead.

The Jaguares then dominated possession and territory for the final ten minutes of the second half and capitalised on their superiority with a Sanchez penalty and Boffelli's second after a brilliant offload from Joaquin Tuculet set him clear as the hosts took a 25-14 lead in to the interval.

It took eight minutes for the Jaguares to breach the Lions' defence after the interval and it came from turnover ball. Delguy went on a weaving run before the ball found its way to Boffelli who collected his own kick through to dot down for his brace and sixth of the season. Sanchez's conversion made it 32-14.

After a couple of instances in which the Jaguares managed to repel Lions' attacks, the visitors held their nerve and eventually Malcolm Marx powered over from close range a couple of phases after another driving maul had been halted. Jantjies' conversion cut the deficit to ten at 31-21.

Soon afterwards, the deficit had been reduced to just three when Lourens Erasmus burrowed over from close range after 14 phases of excellent interplay between Lions' forwards and backs.

But the Lions were guilty of missing their tackles as Bautista Ezcurra was allowed to wriggle through. Sanchez's conversion made it a difficult proposition for the South African side with 15 minutes to go 39-28 behind.

The Lions immediately put that lapse in concentration behind them and delivered an instant riposte as Marx crept over at the back of a rolling maul.

The topsy-turvy nature of the game continued. The difference this time was the quality of the pass from Sanchez for Javier Ortega Desio to show his speed and gallop through for the try and restore the 11-point buffer.

A Sanchez penalty late on merely confirmed an impressive victory. 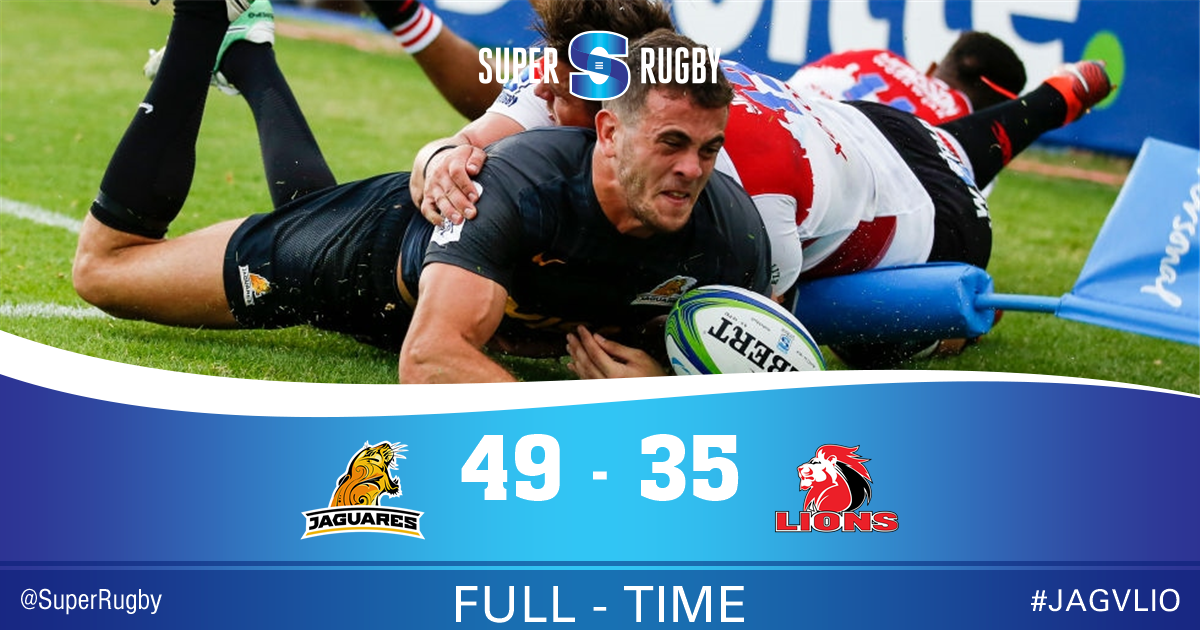