Jaguares Too Strong for Lions in Buenos Aires

The Jaguares opened their 2020 Super Rugby campaign with an impressive 38-8 victory over the Lions in Buenos Aires.

Last year's finalists ran in five tries to one to seal a dominant bonus-point victory at the Jose Amalfitani Stadium.

The Lions were handed an early shot at goal after earning a penalty in the first scrum in the game, but flyhalf Elton Jantjies was wide of the target.

The Jaguares lost their flyhalf Joaquin Diaz Bonilla to injury in the ninth minute but found themselves in front moments later courtesy of his replacement Domingo Miotti, who collected the ball from a rolling maul and ran in for the try. Miotti converted his own score to make it 7-0 to the hosts.

The Lions opted for another shot at goal midway through the half after getting another penalty in a kickable position, and this time Jantjies slotted it to bring them back to within four.

Three minutes later, the visitors were in front when a turnover ball on their own 22 led to a breakaway from No 8 Len Massyn and his inside pass to Andre Warner allowed the scrumhalf to beat the cover defence and score. Jantjies failed to add the extras as the Jaguares remained a point behind.

The Argentinean outfit would have had their second try shortly after had a forward pass not spoiled their attack, but they were playing with the advantage and Motti was happy to take the points to give his side a 10-8 lead at the interval.

The Jaguares were giving away too many penalties in the match, including seven in the first half alone, and paid the price for their ill-discipline early in the second period when flanker Marcos Kremer received a yellow card for a dangerous tackle off the ball.

That gave Jantjies a chance to set up an attacking lineout close to the Jaguares tryline but his kick went over the goal line to let them off the hook.

Despite being down to 14 men, it was the home side who scored next as Matias Moroni ran a great angle to collect the ball from Miotti and cross for their second try.

Less than 10 minutes later, Moroni was in again after collecting the ball on the right-hand touchline and cutting inside to beat the Lions defence. Miotti stayed on target as the home side opened up a formidable 24-8 lead.

The Jaguares scored their fourth try with 10 minutes to go, with Moroni and Miotti once again involved in the build-up, although substitute Javier Ortega Desio was the man who dotted down.

And with the clock winding down the hosts rubbed further salt in the wounds when Agustin Creevy crossed for their fifth five-pointer from behind a rolling maul to seal the emphatic win. 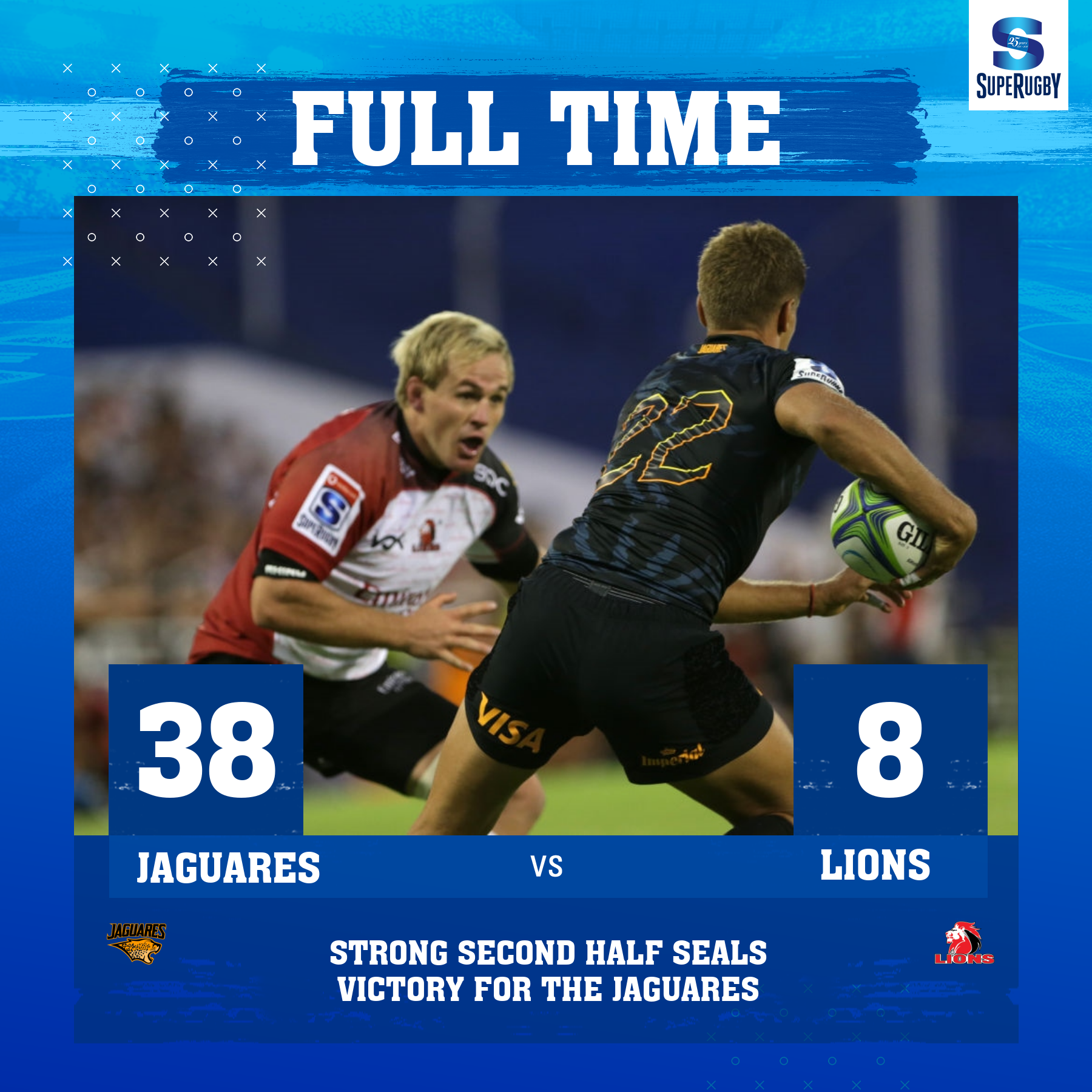