Jaguares upset the Chiefs in Rotorua

The Jaguares’ superb run of form shows no sign of abating after they claimed a shock 23-19 victory over the Chiefs in Rotorua on Friday.

In a tightly contested game, the men from Buenos Aires were full value for their win as they dominated for large periods and eventually outscored their hosts two tries to one.

The result means the Jaguares have now won four consecutive matches on their Australasian tour- after wins over the Rebels, Brumbies and Blues – and they consolidate second position in the South African Conference standings while the Chiefs are still in fourth spot on the New Zealand Conference table.

The Chiefs did most of the early attacking and opened the scoring in the ninth minute courtesy of a Damian McKenzie penalty after the visitors strayed offside on defence.

The Jaguares had the better of the exchanges for the next 10 minutes and nearly scored the opening try when they took the ball through 16 phases, close to the Chiefs’ try-line, but the home side kept them at bay with a superb defensive effort.

The Jaguares eventually opened their account in the 19th minute when Emiliano Boffelli slotted a penalty from 49 metres out after Michael Allardice infringed at a breakdown.

Five minutes later, the Chiefs regained the lead when McKenzie added his second penalty after Santiago Garcia Botta was blown up for illegal scrummaging but the Jaguares were back in front by the 27th minute thanks to a well-taken try from Ramiro Moyano.

This, after Joaquin Tuculet put his team on the front-foot with a superb line break. His progress was eventually halted deep inside the Chiefs’ 22 but the ball was recycled quickly before Moyano beat two defenders on his way over the try-line.

Nicolas Sanchez added the extras before McKenzie slotted two further penalties which gave the home side a slender 12-10 lead at half-time.

The Jaguares were back in front shortly after the restart when Sanchez converted another penalty after Liam Polwart was blown up for offside play and things went pear-shaped for the home side shortly afterwards when Michael Allardice and Liam Messam were both yellow carded in quick succession.

Allardice received his marching orders first for a dangerous challenge on a Jaguares player and a minute later Messam joined joined him in the sin bin when he collapsed a Jaguares maul close to his try-line.

Referee Mike Fraser also awarded a penalty try to the visitors which meant they were now leading 20-12. The Chiefs upped the ante on attack and thought they had narrowed the gap in the 63rd minute when Charlie Ngatai beat three defenders before crossing the whitewash but his effort was disallowed when the TMO ruled that Polwart had knocked on in the build-up.

The visitors breathed a sigh of relief and sealed their win in the 71st minute when Sanchez landed another penalty after Messam was caught offside on defence.

The Chiefs tried gallantly to haul in their visitors during the game’s latter stages and secured a losing bonus point in the game’s closing stages when Jesse Parete crossed for their only try. 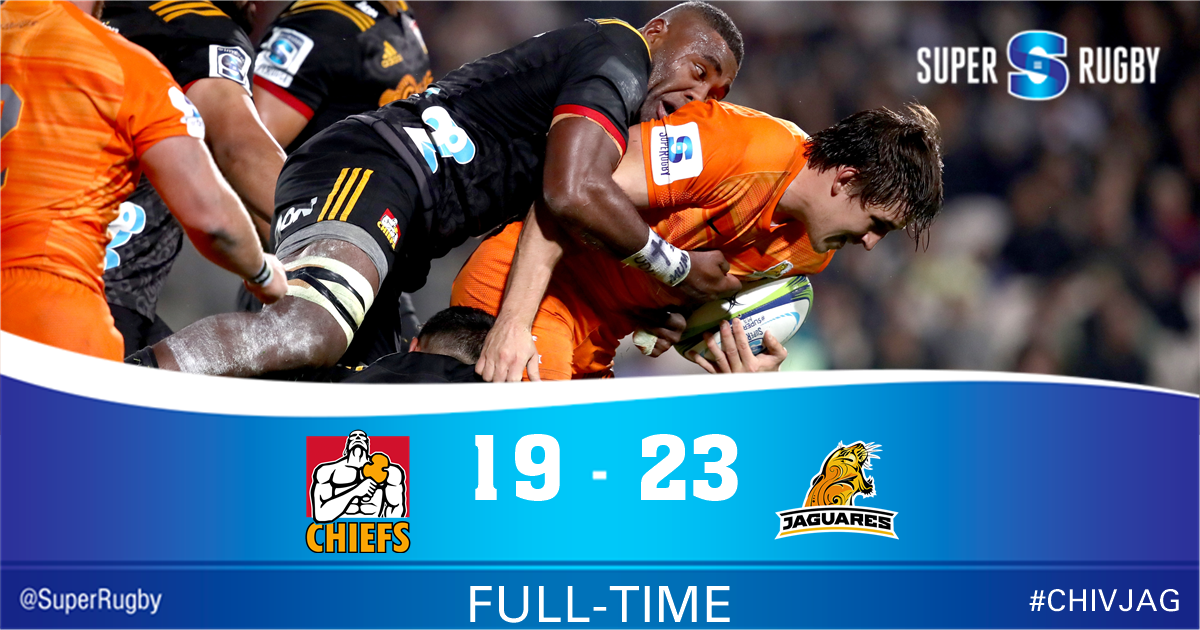