The Jaguares wrapped up the South African conference with a 34-7 bonus-point victory over the Sharks in Buenos Aires.

The Jaguares started on the front foot and scored the game's opening try within three minutes when Sebastian Cancelliere finished in the right-hand corner after quick hands from the hosts' backline.

The home side continued to dominate and had their second in the 15th minute. After a series of powerful carries from the forwards, Joaquin Diaz Bonilla released Emiliano Boffelli through the Sharks defence with an excellent pop pass on the back of a lovely wrap-around and the full-back did the rest.

The Sharks were finding it difficult to get over the advantage line due to the Jaguares' rush defence. The game went through a scrappy period with plenty of knock-ons and subsequent scrum resets.

The Argentine side, who had shown a preference to kick for touch instead of poles, changed their mind on the half-hour mark but Diaz Bonilla's attempt went wide after the Sharks conceded a scrum penalty.

The fly-half had a chance to make amends shortly afterwards when Robert du Preez was penalised for holding on after good work from Matias Moroni and Marcos Kremer at the breakdown, however, he missed the third of his four kicks at goal.

Three minutes after half-time, the Jaguares won a penalty and kicked for touch after Andre Esterhuizen was penalised for a late tackle. After a couple of phases from the lineout, Gonzalo Quesada's side won another penalty straight in front and Diaz Bonilla dinked it over for a 15-0 lead.

Soon after, the Jaguares were penalised for not rolling away and Curwin Bosch kicked for touch, setting up the five-metre attacking lineout. But the home side stole the lineout, which has been one of their strengths this season.

The Jaguares grabbed their third in the 53rd minute when Diaz Bonilla's up-and-under was wonderfully chased and collected by Boffelli, who did enough to evade Lukhanyo Am on his way over the whitewash.

The Sharks were playing like a side jet-lagged from the long trip, especially at lineout time. The Jaguares just looked so much hungrier and deservedly scored their fourth try on the hour mark. Boffelli sidestepped his way through the defence with a mazy run and a couple of passes later, Cancelliere sped over for his brace.

In the 67th minute, the Sharks finally opened their account. After the Jaguares were penalised for playing the man in the air at the lineout, the Sharks kicked for the corner again before Esterhuizen crashed over after a series of carries from the forwards.

Santiago Carreras put the icing on the cake with the last move of the game when he ran on to a deft grubber kick to dot down and wrap up a comprehensive victory. 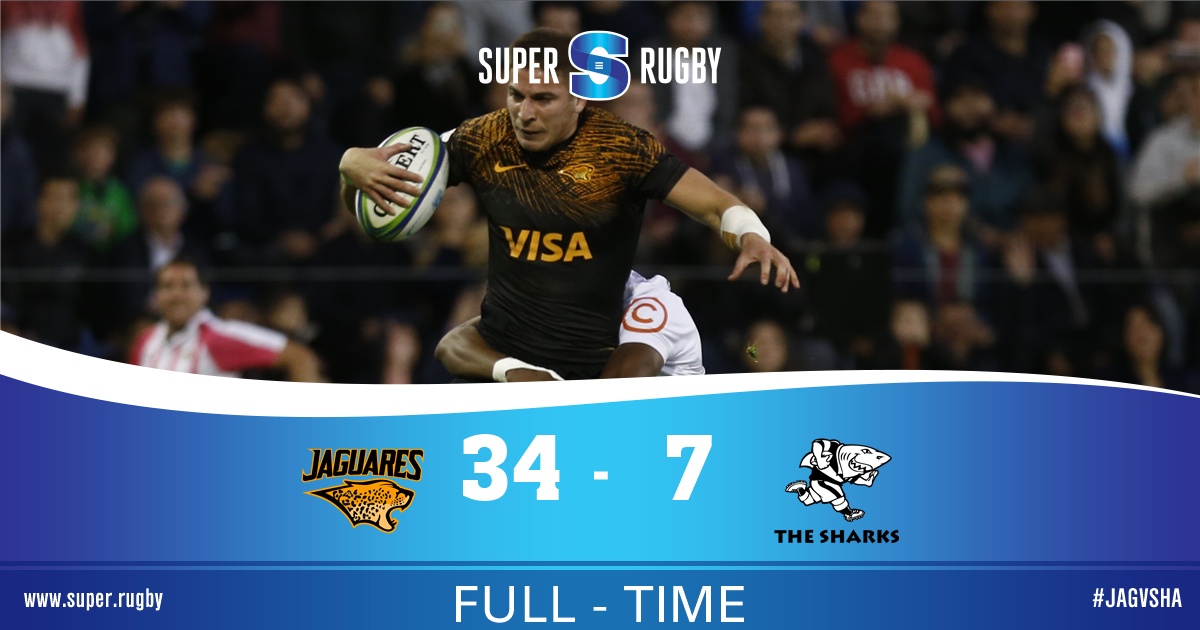