Moana Pasifika captain Sekope Kepu has had a stellar career, but leading his side into Super Rugby Pacific against the Crusaders in Dunedin on Friday, will be one of the toughest tests.

The 36-year-old tighthead prop has 110 Tests for Australia and 141 games for the Waratahs behind him, yet creating a foundation for a continuing outlet for Pacific rugby may represent his most memorable legacy.

Knocked around by Covid and missing their first two games puts Moana Pasifika at an immediate disadvantage. Having to face the champion Crusaders team, albeit with less experience than usual, adds to the pressure on the side.

Before adding those factors, Moana Pasifika is playing Super Rugby catch-up 26 years after the other sides started.

But they were determined to make their mark.

Kepu said executing the game plan and the structure prepared would be the main aim for the side on Friday in Dunedin.

Having the 11 players making their debuts going out and expressing themselves would go a long way towards setting the side off in the right direction.

"If we can keep those, and limit the opportunities that we give to the Crusaders that will a long way," he said.

YOUR TEAM TO MAKE HISTORY ON FRIDAY NIGHT

There was excitement to be getting into action finally. It had been a case of keeping a lid on that ahead of the game.

"We've been through it [Covid interruptions], I think we've grown as a team, as a group of young men. We've had a lot of time to reflect away from the rugby, but we're here now and excited about Friday night," he said.

Coping with Covid, when it struck the side, had been tough, Kepu said, but they had helped each other with regular contact and discussions.

"We shared the pain and enjoyed the good times together," he said.

Coach Aaron Mauger said while there were 11 Super Rugby debutants, some of them were overdue that status.

The squad had all put their hands up for selection. The side was in a good space, he said.

"I'm excited to play the Crusaders. What better way to start the competition? Our guys are aware of that, they've respected the Crusaders through our preparation. They've worked hard on knowing where we need to be before the game," he said.

They had lifted their intensity each week after the lessons from their pre-season game against the Chiefs. Now it was a case of respecting the Crusaders, but at the same time not being afraid to throw Moana Pasifika's game at them.

Knowing the Forsyth Barr Stadium from his time as Highlanders coach was an advantage, and Mauger said it was also helpful having a surface to train on at their Arrowtown base that was similar to the stadium. But it was also nice to know they would play with a dry ball.

The requirement for his side would be to play from whistle to whistle and not let off because the Crusaders showed against the Hurricanes and Highlanders what they could do when they dropped their guard.

"The challenge for us is to stay with them for as long as we can. Who knows, by the end if we are in the hunt we'll keep throwing everything at them," Mauger said. 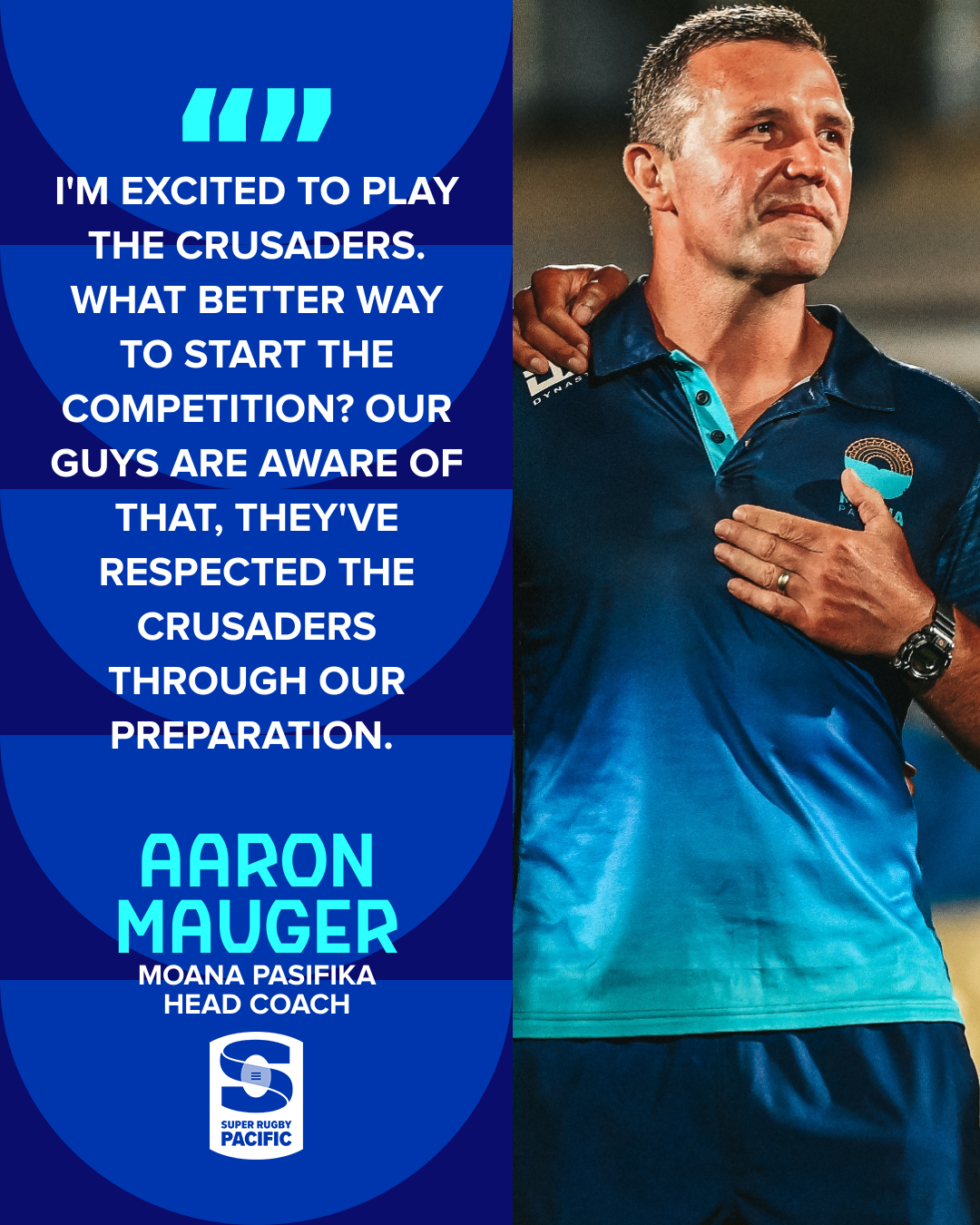