Kings get the Blues at home

The Blues secured their third consecutive victory when they outsmarted the Kings 34-18 in Port Elizabeth.

The Auckland side, who beat 17 defenders more than their opponents, could not make the Kings pay for their poor defensive form which saw the home side miss an enormous 31 tackles.

Despite the Kings' alarmingly high number of missed hits, the New Zealanders were made to work for their try-scoring bonus point which only came in the 84th minute.

The Blues outscored the Kings by five tries to two with the boot of Ihaia West keeping the South African side at arm's length by adding three conversions and a penalty.

The Auckland side's five-pointers came via a brace from winger Melani Nanai, plus scores by James Parsons, Billy Guyton and an injury-time bonus point try from speedster Tevita Li, while James Hall and Edgar Marutlulle were the only scorers for the Port Elizabeth side.

This win takes the Blues off the foot of the New Zealand Conference table but it does get them to within six points of the fourth placed Hurricanes, but the Auckland side have played one game less.

Elgar Watts got the home side off to an early lead after the Blues discipline let them down at the breakdown.

The Blues made their intentions clear early on, when they opted for touch as opposed to taking the three points on offer, but this decision proved to be worth the risk as captain James Parsons burrowed over for the first try, Ihaia West however missed the conversion.

Scrum-half Hall cleverly dotted down against the post and got the home side's first try after the visitors failed to clear their try line, as Watts added the extras to make the score 10-5 in favour of the South Africans.

The Blues failed to capitilise on three lineouts in the first half despite showing signs of domination at this set piece. Nanai did however crash over under the upright for the visitors' second try, the winger rounding a move off that orignated from a maul.

It was the 22-year-old speedster that got over for his second try, this time his pace allowing him to slice through the Kings' defence and West added the extras from right in front taking the half-time score to 19-10.

West added an early second half penalty after the Kings were penalised at the ruck extending their half-time lead to 22-10.

Hooker Marutlulle got over for his fourth try of the season and the Kings' second try after opting to set up two driving maul opportunities. Despite being within Watts' range, the fly-half however missed the conversion as the score read 22-15.

Jurgen Visser slotted a long range penalty as the final quarter approached, this after the Blues were penalised for going off their feet at the ruck, and his kick made it a four-point game at the time - but it was also the home side's last points of the match.

Replacement scrum-half Billy Guyton collected the ball at the back of a driving maul and went over for the third Blues' try, virtually unchallenged, and West added the extras extending the visitors lead to 29-18 going into the last ten minutes.

The visitors never gave up on the much-needed try bonus point and an 82nd minute penalty was taken quickly which allowed winger Li to dive for the Blues' fifth try to secure maximum points for Tana Umaga's men. 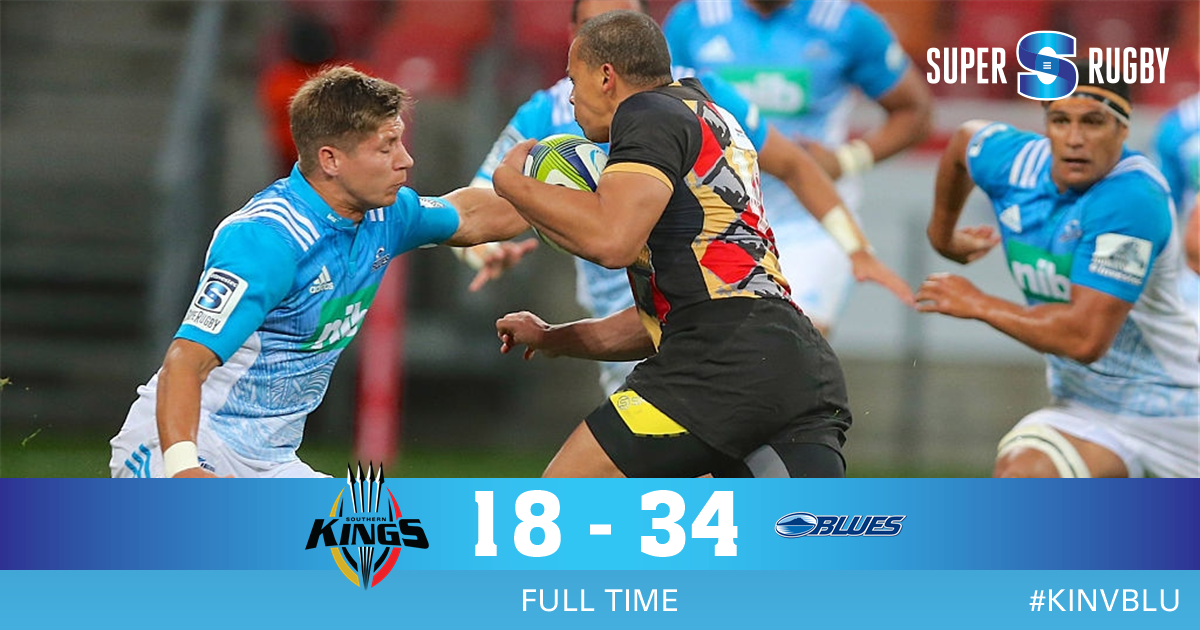