Kings of the Lineout

Success at the lineout is crucial for success on the scoreboard and Super Rugby 2019 is no exception. Already this campaign we’ve seen the cream rise to the top at this set piece and it looks destined to be a pivotal part of many teams’ tilts at the trophy this season.

The Bulls have proven themselves as the team to beat at the throw this campaign - they are the only team to have played in both rounds and maintain a 100% success rate at the lineout.

The Rebels are also flawless from their sole game thus far in the campaign, while the Jaguares are well and truly announced as competitors with a success rate of 96%.

Only six of the tournament’s 15 teams currently sit at a success rate of 90% or higher this season, while the Queensland Reds anchor the table with a lowly rate of just 63% on their own throw.

It’s no surprise to see Bulls pair Schalk Brits and Corniel Els at the top of the charts as the most successful throwers in the season thus far.

We’re just two rounds in, but already the Bulls hookers stand alone as the only players to have made 10+ throws and maintain a 100% throw success rate.

Fellow South African Malcolm Marx is not far behind with a respectable success rate of 94% this campaign. The Lions hooker has made a competition-high 31 throws, making his figure all the more impressive.

It’s been the New Zealand teams who have shown less discipline on the throw, with the highest ranked thrower for a New Zealand outfit this season coming in at seventh. The Crusaders’ Andrew Makalio has been successful with 16 of his 18 throws this season for a success rate eight percentage points higher than that of any other New Zealand-based player. 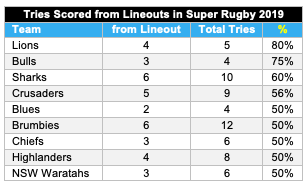