To win a game in Super Rugby you really have to play for the full 80 minutes - no switching off as you will get overrun, especially it seems if you are playing a Kiwi team!

“A tale of two halves” is an expression not uncommon in the sporting world. A half-time advantage is always welcome but it can’t be misconstrued as meaning a fated result for the side in the lead and it’s a pitfall that some teams have taken advantage of more than others across the last 11 seasons of Super Rugby action.

The New Zealand teams – among the most enterprising in attack in recent times – dominate the table when it comes to bouncing back to win from a half-time deficit in the competition since the beginning of the 2010 campaign. 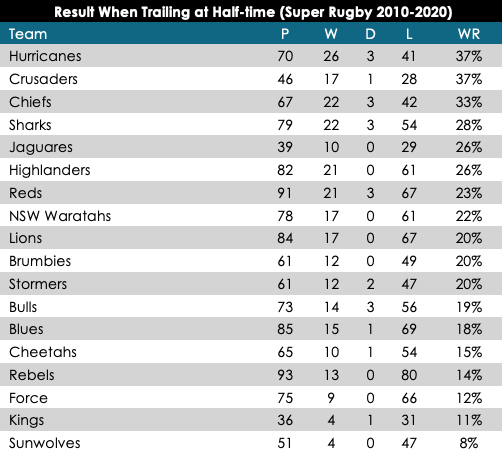 The Crusaders – the most decorated team in the history of the competition – are just a hair from the top, having won 37% of their games in that period when they’ve been on the losing side at half-time. The Hurricanes – who have won 37.1% of such fixtures – are without peer in this regard.

Indeed, the top three is rounded out by another New Zealand outfit. The Chiefs (33%) are the only other team to have turned a half-time deficit into a full-time win more than three times out of every 10.

The Sharks, who have won 28% of their games when they’ve trailed at half-time since the beginning of the 2010 season, are the only South African team to have won more than two-in-10, while the Reds (22%) are the highest ranked among the Australian outfits.

The Crusaders 57-14 win over the Cheetahs in Round 6 of the 2015 campaign is the biggest half-time turnaround of any team trailing at the break since the beginning of the 2010 Super Rugby season. They outscored the South African side 47-0 in the second-half to overcome an unlikely narrow deficit in the opening stanza. The Hurricanes’ 56-21 win over the Brumbies in Round 9, 2017 is the only other time any team has produced a turnaround of more than 40 points from the half-time score to the full-time score (+42pts).

Three of the four games since the beginning of the 2010 Super Rugby season have seen a team win after trailing by 19 points or more at the half-time break have involved the Rebels. While the Melbourne team has only managed to win one of those, it ranks at the top in this category.

The Rebels trailed the Highlanders 31-7 at half-time in Round 20, 2013 – a margin of 24 points – before a spirited second-half performance saw them bounce back to win by just a single point on the day (38-37). It’s the largest margin any team has trailed by and still managed to win in Super Rugby since the beginning of the 2010 campaign.