A last-gasp penalty from Otere Black earned the Blues a dramatic 23-21 victory over the Bulls at Loftus Versfeld.

The Bulls were denied what would have been a first win of the season in their first home game, while the Blues clinched their second victory over the campaign.

The Bulls scored tries through Morne Steyn and Jeandre Rudolph, while the visitors got themselves on the try column through Mark Telea, Tom Robinson and Stephen Perofeta.

The home side took an eighth-minute 3-0 lead thanks to the boot of Morne Steyn after they won a scrum penalty from just outside the Blues' 22 for the fly-half's first points at Loftus Versfeld since 2013.

Steyn doubled the lead when the Blues were caught offside in front of the posts on their own 22 with a quarter of an hour gone.

Soon after, Otere Black halved the deficit with a penalty after Bulls prop Trevor Nyakane was penalised for not rolling away.

The Bulls' discipline cost them in the first half as they were reduced to fourteen men not once but twice as first prop Andries Ferreira was sin-binned in the 20th minute for dissent and then captain Burger Odendaal saw yellow in the 27th minute for a high hit.

With a two-man advantage, the Blues capitalised when wing Mark Telea did brilliantly to keep himself within the field of play to finish in the left-hand corner after a sweeping backline move from the visitors.

The Blues were reduced to 14 men on the stroke of half-time when Jonathan Ruru was sent to the naughty corner for cynically slowing down the ball after a Bulls line break by not supporting his own body weight at ruck-time.

And the Bulls immediately took advantage of the extra man as a dominant five-metre attacking scrum saw Steyn double around off the back to create the overlap on the left-hand side and dot down in the corner. The Bulls number ten missed a difficult conversion from out on the touchline as the home side took an 11-8 lead in to the interval.

Steyn was given an opportunity five minutes after the interval to extend the lead when a Blues tackler was guilty of not rolling away and the Bulls fly-half made no mistake from right in front.

The Bulls were penalised for a dangerous tackle and the Blues kicked for the corner five metres out from their opponents' tryline. The visitors set up the attacking lineout and after some good phase play flank Robinson powered his way over from close range as Black converted for a 15-14 lead.

The away side extended their lead on the hour mark. Black's cross-kick was caught by Matt Duffie, who expertly popped the ball inside for Perofeta to have an easy run-in.

The Blues had Hoskins Sotutu sent to the sin bin ten minutes from time for repeatedly tackling late and the Bulls capitalised on their numerical advantage as they reduced the deficit to one with their second try of the game soon afterwards.

The home side opted for the scrum and it paid dividends as Rudolph dotted down at the back of the set-piece. Manie Libbok slotted the conversion to give the Bulls a one-point lead.

But Black broke Blues' hearts in final minute when he kept his nerve under pressure to slot the all-important penalty and snatch victory from the jaws of defeat for the Auckland-based side. 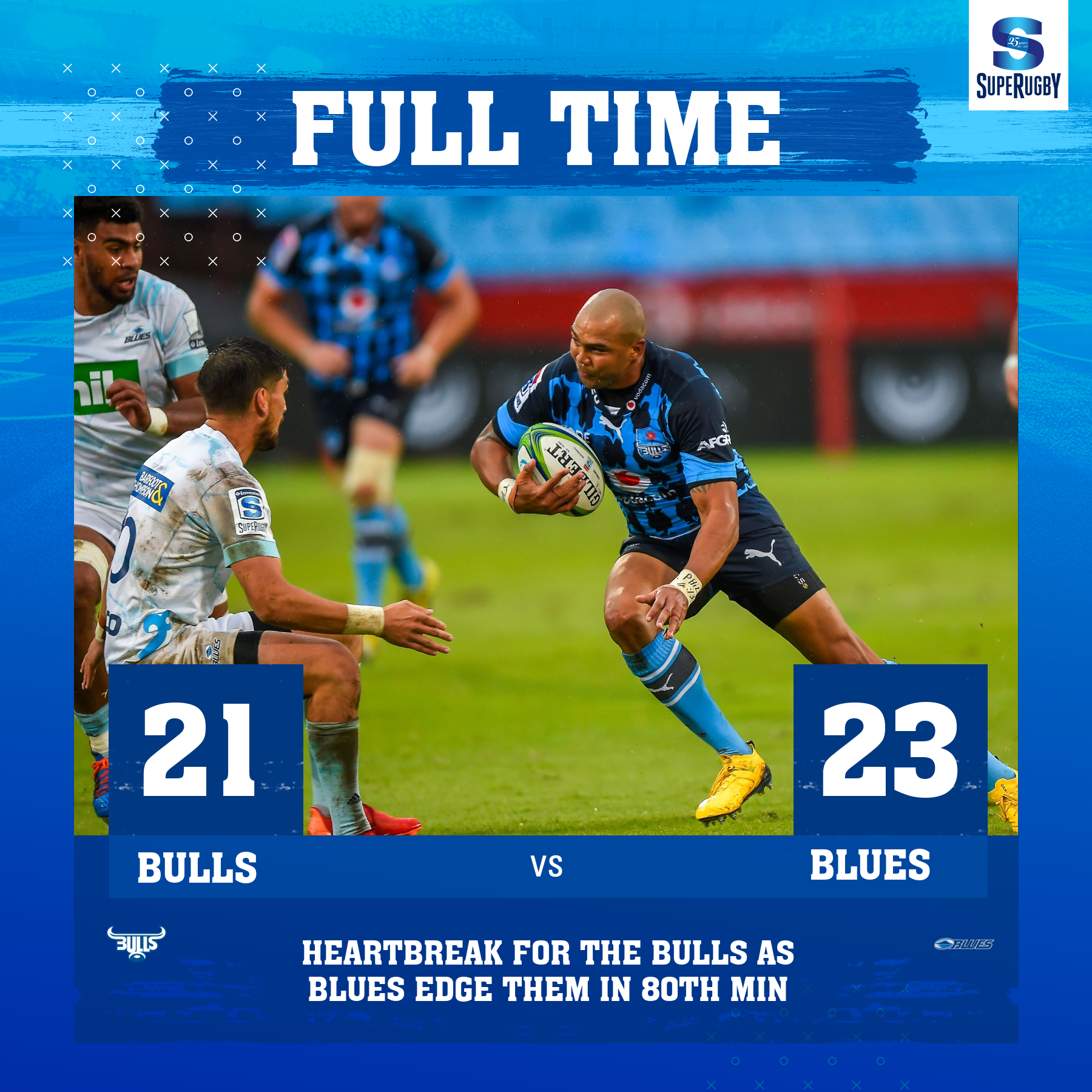