The Stormers sealed a 19-19 draw against the Crusaders with the final kick of the match after an absorbing contest at Newlands Stadium.

With the Crusaders almost enjoying home support due to the large amounts of fans they have in Cape Town, many were predicting a runaway victory for the table-toppers from Cristchurch, but the Stormers proved to be no pushovers.

The opening try arrived in the sixth minute courtesy of Springbok captain Siya Kolisi. It was a stolen line-out on the Crusaders 22 that put the home side on the front foot, and a simple pass to Kolisi in the midfield that allowed the flanker to cut through a gap in the middle, shrugging off one defender being going all the way.

Number 10 Josh Stander added the extras, and then added three more points 10 minutes later after a penalty was awarded in a kickable position.

The Crusaders were never going to be kept quiet for too long, however, and after finding a bit of rhythm they were soon rewarded with their first try just before the half-hour mark.

Opting for an attacking line-out in the opposition 22, captain Sam Whitelock collected the ball and set up the maul, which advanced quickly before No 7 Matt Todd broke off to the side and fell over the line.

Both teams were looking to run with the ball, making for exciting, free-flowing rugby, and the Crusaders took the lead for the first time five minutes before the break when they scored their second try through fullback David Havili.

It was a crosskick from flyhalf Richie Mo’unga following a scrum that did the trick, with Havili collecting the ball and scoring before Mo’unga kicked his first successful conversion to give the visitors a 12-10 lead at the break.

It didn't take the Crusaders long to pick up where they left off in the second half, with substitute Braydon Ennor scoring their third try just four minutes in.

It was a break on the wing that had the Stormers defence in trouble, allowing Ennor to find a way through and dot down after collecting the offload from Codie Taylor.

Mo’unga added the extras to make it 19-10 to the visitors, though Stander was able to chip away at the lead somewhat with his second penalty kick of the evening seven minutes later.

The home side kept plugging away and getting themselves into the opposition territory, and they were rewarded with another scrum penalty not long after to cut the visitors' lead to three points, substitute Jean-Luc du Plessis having taken over the kicking duties.

But the Crusaders were showing their mettle in defence, and continued to look dangerous on attack, and with three minutes left on the clock No 14 Sevu Reece looked to have made sure of the victory after a clever chip and chase saw him cross the line, only for the try to be ruled out by the TMO for a forward pass in the build-up.

And with time running out, the Stormers were handed another penalty while on the attack in the opposition 22, and left with the choice of kicking for the draw, or trying for the win one more time, they opted for the former, as Du Plessis slotted the ball through the uprights to tie things up just as the final whistle blew. 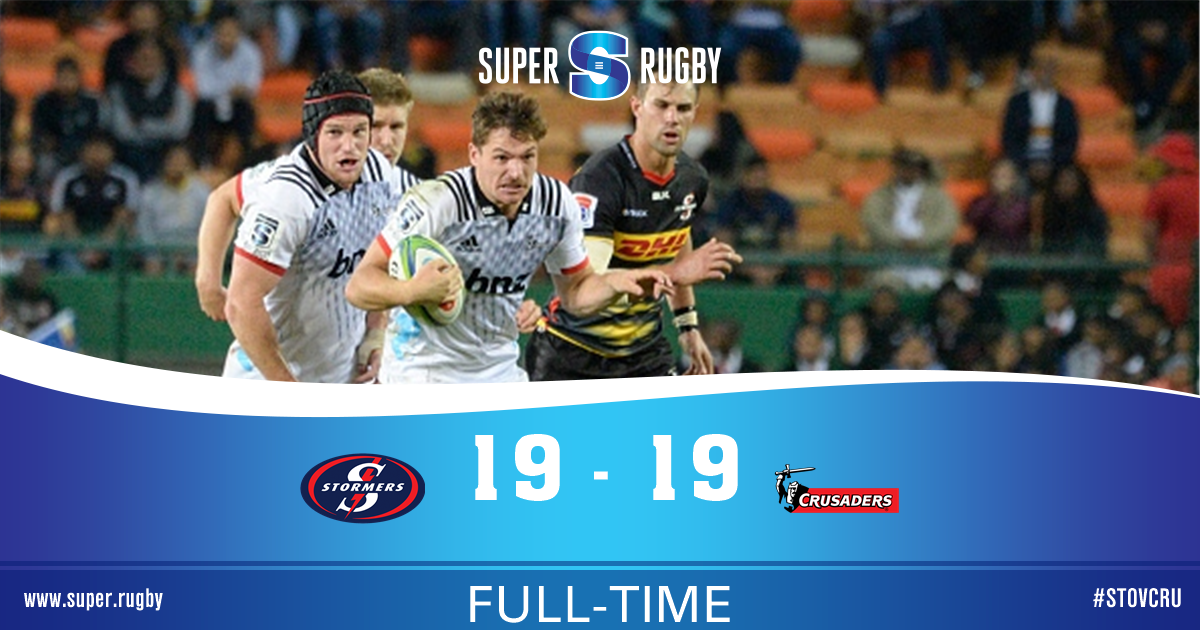