The Reds avenged their final defeat to the Brumbies last year with a 40-38 victory over the Brumbies in a Super Rugby AU thriller at GIO Stadium on Saturday.

The Reds avenged their final defeat to the Canberrans in a thriller of an encounter.

Reds loose forward Angus Blyth was penalised for offside in his own 22 and Noah Lolesio slotted the penalty between the poles to give the home side a 3-0 lead after three minutes.

Soon after, the hosts scored the first try after Jordan Petaia knocked on on his side’s 10m line which gave the Brumbies a scrum in a good attacking position. Nic White was getting some quick ball and swung the ball out to the right. It went through the hands and Andy Muirhead went between two defenders and got the offload away for Pete Samu, who did well to tip-toe within the field of play in the right-hand corner and dot down.

Seven minutes later, The Brumbies won the set-piece penalty and they went to the lineout before White was held up over the goalline. Tom Banks kicked for the corner again and Folau Fainga’a broke off the rolling maul and crashed over to score. Lolesio landed another kick, this time from the lefthand side for a 17-0 lead.

James O'Connor got the Reds on the board with a three-pointer in the 18th minute. And four minutes later, three straight penalties by the home team allowed the Reds’ skipper to take another shot at goal from in front as Tom Cusack was warned by the ref. And the fly-half made no mistake to double his side's tally.

The away side dotted down for their first try on the half-hour mark. After several kick-chases, the Reds ran the ball from deep inside their half. They set up a ruck in midfield, Tate McDermott sent the ball to O’Connor, who set his team away. The standoff drew the defenders, passed to Harry Wilson, who sent Suliasi Vunivalu away for a debut Super Rugby score.

Five minutes out from half-time, the Ewen McKellar's side got in for their third try. Pete Samu was at it again when he took White’s delayed show-and-go pop-pass above his head and dived in the corner for his second try of the game.

Lolesio slotted the conversion and O'Connor kicked another three-pointer as the sides went into the interval with the Brumbies holding a 24-16 lead.

The Brumbies started the second half a bit sharper and Fraser McReight left his feet at the ruck with Banks kicking to the corner. And Fainga’a crashed over for his second try after a powerful driving maul.

Shortly after the hour mark, Taniela Tupou, who had been sensational since coming on as a replacement, crashed over from close range to give his team hope. The momentum had well and truly swung in the Reds' favour.

Another massive scrum saw Harry Wilson's try and O'Connor's conversion make it a one-score game with ten minutes to go to set up a thrilling finale.

The Brumbies then took themselves eight points ahead of their opponents. Ssak Fines-Leleiwasa danced down the right-hand sideline, beat two defenders, and scored in the corner. Len Ikitau’s brilliance set up the score. Ryan Lonergan converted.

But the game still had one final twist in it. O’Connor made it 38-33 in the 75th minute and with just two minutes to go before the hooter, Hunter Paisami’s deft grubber was dotted down by Jordan Petaia. O'Connor made it 40-38 as he held his nerve with the penalty.

The Reds produced one good final play winning the turnover and kicking the ball out of play to secure a third straight win which equals their best winning run to begin a Super Rugby season. 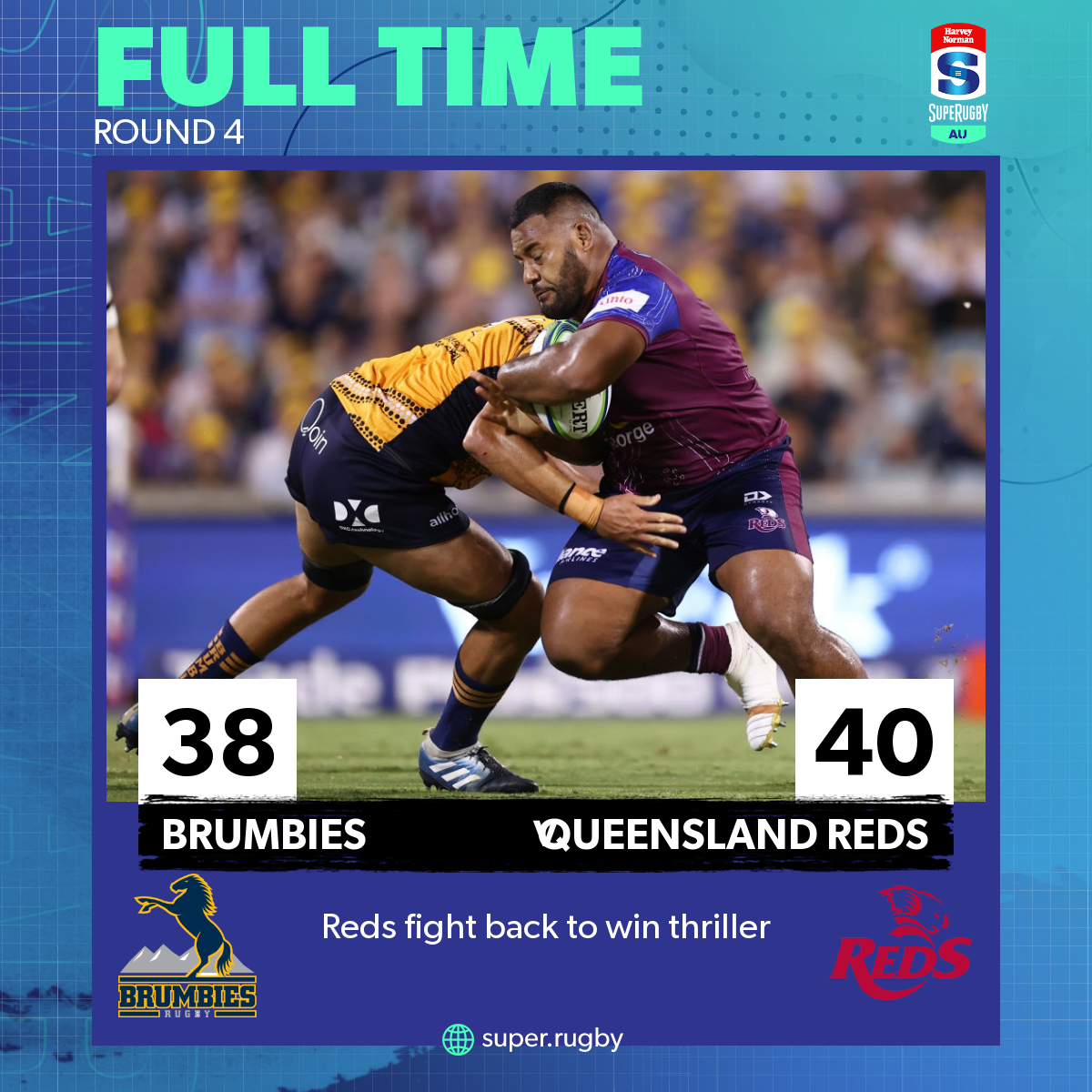