Golden point tie breakers, the ability for teams to replace players following a red card, and a renewed focus from referees on ensuring a fair contest at the breakdown are among the innovations fans will notice when Investec Super Rugby Aotearoa kicks off.

The new-look competition kicks off on Saturday, 13 June when the Highlanders play the Chiefs at Forsyth Barr Stadium in Dunedin, with the Blues playing the Hurricanes at Eden Park on Sunday, 14 June.

“We want this competition to look and feel different. We’ve had great support from our coaches, players and referees to make Investec Super Rugby Aotearoa faster, safer and more exciting than ever before."

If a match is tied after 80 minutes of regular time, the result will be decided by golden point. The first team to score - by drop goal, penalty kick, or try - during a 10-minute period of extra time will take the win and earn four competition points.

“Draws can often leave everyone feeling a little empty and after feedback from our coaches and players we have added the golden point rule,” Lendrum said. “We’ve seen the excitement it can generate in other codes and we think adds a real edge.”

If a team loses via golden point, they can still earn bonus points for scoring three or more tries than the opposition in either regular time or extra time. 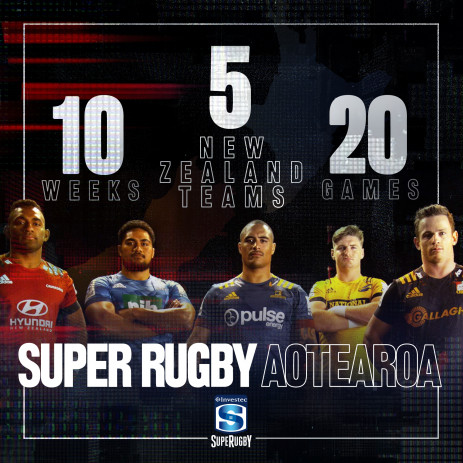 Players who receive a red card can be replaced with another player 20 minutes after they are sent from the field. The sent-off player cannot return to the field and will face Sanzaar’s existing judicial process. There is no change to the yellow card sanction.

“While players should, and still will be, punished for foul play, red cards can sometimes have too much of an effect on a match,” Lendrum said. “There are no winners when a player is red carded, but paying rugby fans, players and coaches want to see a fair contest. Replacing a player after 20 minutes strikes the right balance.”

Breaking down the breakdown

“Fans enjoy Investec Super Rugby because it’s a fantastic spectacle and our referees like to allow the game to flow. We’re confident we'll see a contest that is faster, fairer, safer and easier to understand.

“We're not changing the laws of the game, we're being stricter about how we referee them.”

The key focal points for the SpecSavers referees at the breakdown are summarised below: