The Blues and Crusaders lead the way in Super Rugby Aotearoa at present but it is the Highlanders who rule the lineout...

The Highlanders are the benchmark at the lineout after the opening three rounds of Super Rugby Aotaeroa, posting impressive figures that give them a significant lead on the remainder of the competition in this area.

The Highlanders have won 96% of their 27 lineouts throughout the opening three rounds, opening their campaign with 14/14 successful lineouts against the Chiefs in Round 1 and dropping just one of 14 attempts against the Blues on their own throw in Round 13.

The Chiefs (14.3) are the only team to have won more lineouts per game on their own throw this season than the Highlanders (13.5), while the Blues’ 87% success rate ranks second among the five teams for effectiveness of throw behind the Highlanders. The Hurricanes are currently ranked last in lineout success in Super Rugby Aotearoa, having won less than three quarters of lineouts on their own throw. However, that volatility has gone the other way as well, with the Wellington side also stealing a competition-high 2.5 lineouts against the throw per game this season.

It is no surprise then that the Highlanders’ Josh Dickson [pictured below] ranks first among the most effective players at the lineout. Dickson has won a total of 15 lineouts so far in Super Rugby Aotearoa, the most of any player and five more than anyone else in the competition. 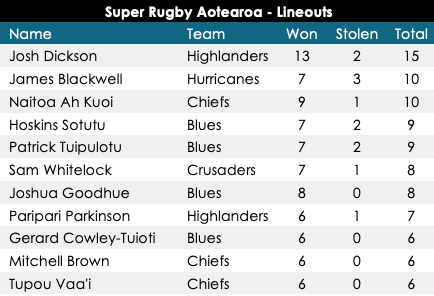 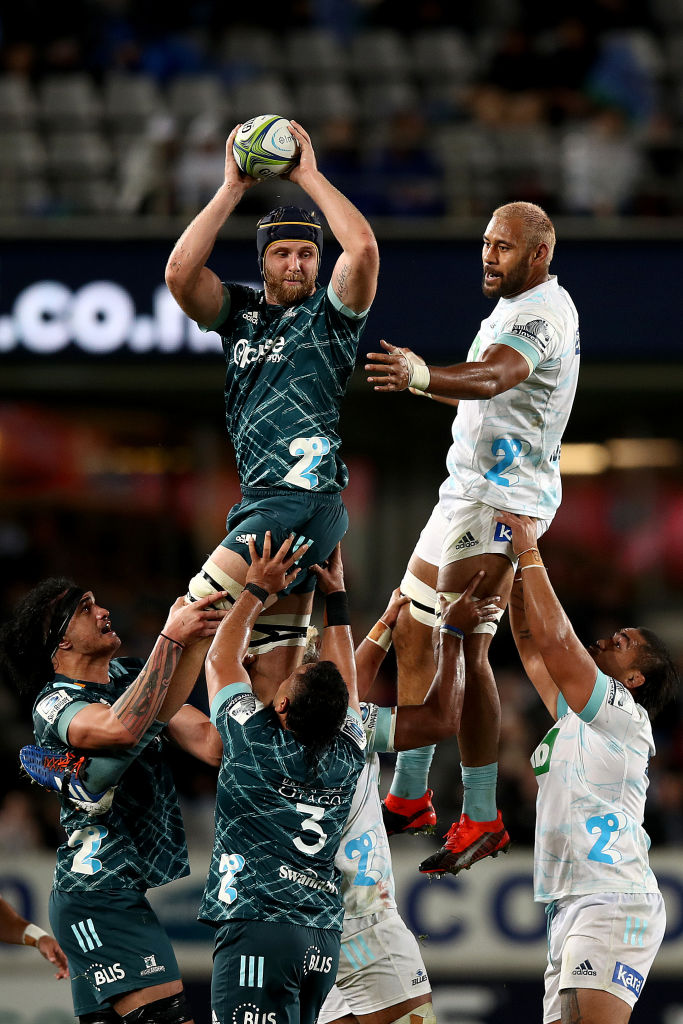 James Blackwell (Hurricanes) ranks equal second overall with a tally of 10 lineouts won throughout the season so far, but his strength has come to the fore against the throw, having won a competition-high three lineout steals thus far.

Naitoa Ah Kuoi of the Chiefs is the only other player in the competition to have won a total of 10 or more lineouts – ranking second alongside James Blackwell – while the Blues’ Joshua Goodhue has won the most total lineouts (8) of any player who is yet to steal one against the throw this season.

The thrower is just as important as the winner and few can boast comparison to the Highlanders’ Ash Dixon this season. Though his total of 21 throws won is the joint-third most of any player this season, he is the only player to have made more than one throw so far and maintained a 100% success rate throughout. 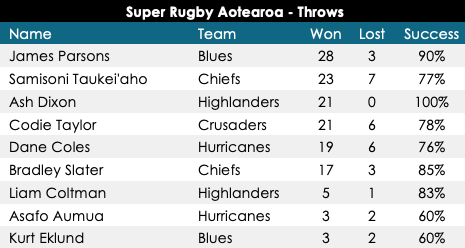 The Blues’ James Parsons has made the most successful throws throughout the opening three rounds of the season (28/31), with his tally of 28 sitting five above any other player. The Chiefs are the only team to boast more than one player with 10+ successful lineout throws so far this season, with Samisoni Taukei’aho (23) and Bradley Slater (17) each having done so after the Chiefs’ first three games of the season.

The five New Zealand teams will continue to refine their set-piece specialities as the intra-country competition continues and we await to see which team will boast the best reliance on their lineout come the end of the campaign.