The Lions put on an attacking display as they ran out 47-39 victors in a 13-try Super Rugby clash agains the Jaguares.

The hosts spent the opening 15 minutes camped in the Jaguares 22, with the Argentinians surviving wave after wave of rolling mauls that involved most the Lions’ backline as well.

Finally, they gave the ball some air and Elton Jantjies held the ball up well to put lock Rhyno Herbst in a gap, crashing over for his first Super Rugby try. Jantjies’ subsequent conversion saw him pass 1000 Super Rugby points.

After some more forward dominance, quick ball lead to Jantjies bundling over the whitewash next to the poles for his first try of the season. Minutes later, Kwagga Smith would secure a turnover then went over in the corner a few phases later after some brilliant back play.

But the Jaguares struck back when Ramiro Moyano gathered a superb cross kick and dotted down in the corner despite a valiant effort in defence.

The Lions proved they are dangerous from broken play, with centre Wandisile Simelane going on a fantastic run to score the Lions’ fourth try. That was cancelled out by a late score from hooker Julian Montoya, who got over from close range. The Lions went down the tunnel with a 26-13 lead at halftime.

The home side started the second stanza like a house on fire, scoring three treis in the opening ten minutes. Marnus Schoeman went over from close range, Courtnall Skosan took a short ball at pace then the winger was perfectly placed for a Jantjies cross-kick, as the scoreline ballooned to 47-13.

But the Jaguares battled back withy two tries set up by a powerful maul. Montoya would bag his brace in the 54th minute, while replacement Gaspar Baldunciel fell over the line after a lineout drive 20 minutes later.

After camping in the Lions 22, the Jaguares lost the ball and winger Sylvian Mahuza hoofed the ball downfield. With time running out, the Jaguares took a quick lineout and caught the Lions defence napping, with Matias Moroni showing a clean pair of heels to dot down under the poles.

But the consolation scores were not over, as the Jaguares scored again after the restart, capitalising off a Lions mistake as the hosts attempted to keep the ball alive to take the score beyond seven points for a bonus point. 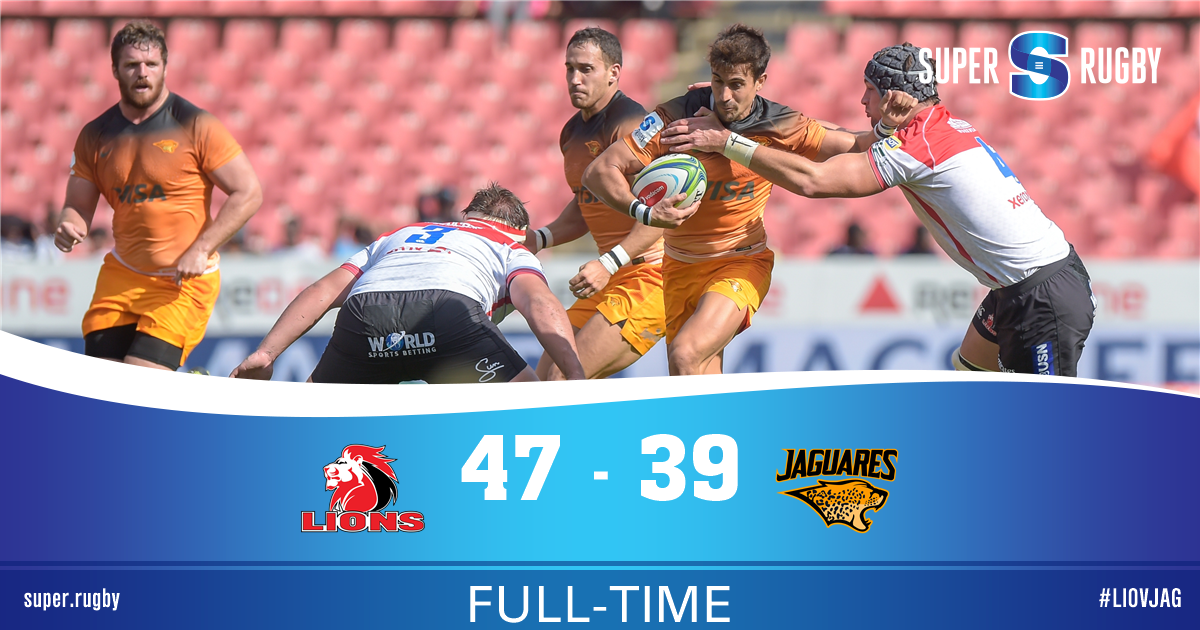