The Lions held on to complete a nail-biting 29-28 victory over a valiant Waratahs outfit in Johannesburg.

Both teams scored four tries in what was a very entertaining clash, but a late penalty kick made the difference in the end as the home side hung on for the win.

The visitors started with a bang, scoring the opening try after just five minutes thanks to some impressive play from the backline, with winger Cam Clark starting the move with a cut inside and scrumhalf Nick Phipps applying the finishing touches.

Bernard Foley added the extras to make it 7-0 but the Lions were soon back on level terms after finding themselves with an attacking line-out five metres out following an earlier interception from Malcolm Marx.

A couple of quick passes did the trick as Aphiwe Dyantyi stretched over the line to put the Lions on the board.

The Waratahs hit back almost instantly through captain Michael Hooper, however, the flanker collecting a long pass out wide before selling a dummy to flummox two Lions defenders and crossing over.

Matters were all square again within minutes, however, as the Lions responded with their second try through big man Stephan Lewies, who made it over the line courtesy of a pick and drive from close range following a rolling maul.

The home side continued to look shaky on defence, and the Waratahs soon had their third try courtesy of Rob Simmons, who simply ran through a gap after a strong carry from Lalakai Foketi had set up a ruck inside the 22.

True to form, the Lions responded shortly after with their third try when Harold Vorster attacked down the right flank and kicked the ball through for Kwagga Smith who managed to chase it down and evade the defender before dotting down.

Jantjies missed the extras, as it finished 21-19 to the Waratahs at the end of an action-packed first half.

The Lions took the lead for the first time in the match early in the second half after a counterattack left the visitors flatfooted. Marx found himself with plenty of space to run and handed it off to Courtnall Skosan who went over before Jantjies converted to make it 26-21 to the home side.

The Waratahs were proving to be absolutely irrepressible, however, and they soon retook the lead through Tom Staniforth, who had the power to shove two defenders aside and drive over the line after an attack out wide had put the visitors in a strong offensive position near the whitewash.

Foley kicked his fourth conversion to give the Waratahs a two-point lead that lasted until the 67th minute when substitute Shaun Reynolds slotted a penalty to give the Lions a 29-28 advantage after the Waratahs were caught offside.

The visitors had been impressive throughout the contest, but with the clock winding down they couldn't find the score the needed to get back in front, as the Lions held on bravely to complete the narrow one-point victory and bring the absorbing contest to a close. 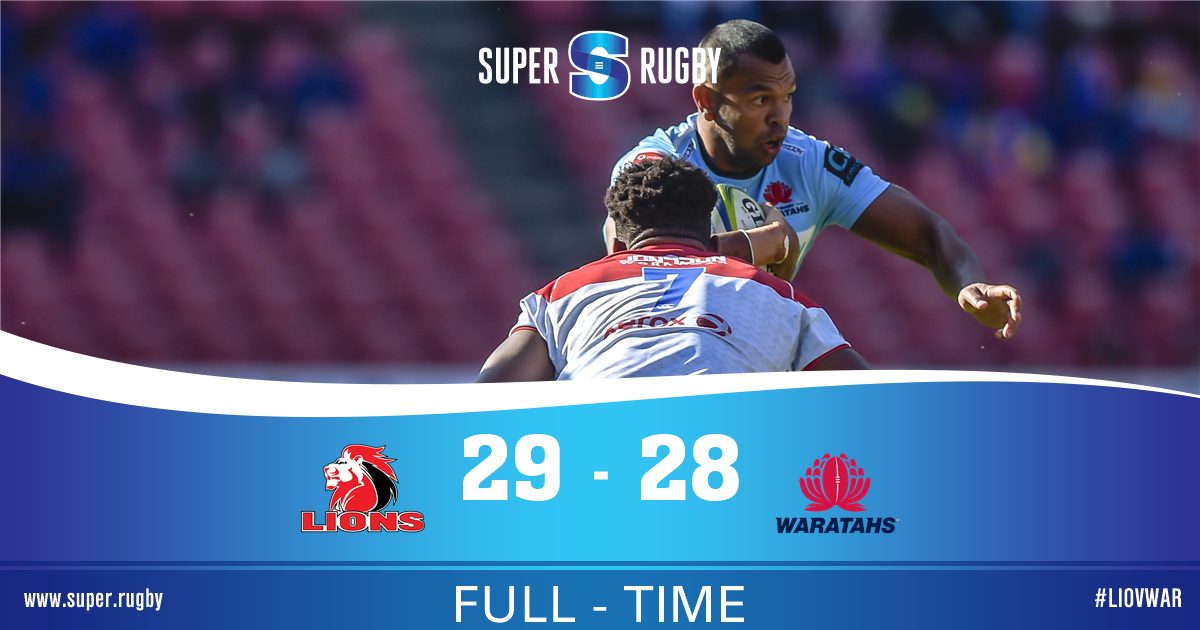