Lions Get the Better of Reds in Johannesburg

The Lions claimed their first win of the Super Rugby season with a 27-20 victory over the Queensland Reds at Emirates Airline Park on Saturday.

Tyrone Green (2), Marnus Schoeman and Courtnall Skosan scored the hosts' tries, while Jock Campbell and Tate McDermott got themselves on the try column for the Reds.

The visitors were exerting the early pressure and opened the scoring in the fifth minute courtesy of a Bryce Hegarty penalty after winning a scrum penalty deep inside the Lions' half.

Soon afterwards, Reds prop Taniela Tupou was penalised for entering the ruck from the side and Lions captain Elton Jantjies kicked for the corner. The lineout was set up, with the ball being swung out to the right-hand side and after a couple of phases, Jantjies put an excellent grubber kick through for right-wing Green to collect and dot down for a 5-3 lead.

The Reds hit back immediately and it came after a bit of helter-skelter play. Lions full-back Andries Coetzee ran on to Jantjies' grubber but his hack rebounded off Campbell, who collected and passed to scrum-half McDermott, who returned the favour and space opened up for Campbell, who was able to run through unscathed to deliver a sucker-punch to the home side.

However, the hosts levelled matters at 10-10 when Green stepped his way over from close range for his brace after patient build-up from the Johannesburg-based side.

The Reds were gaining the ascendancy in the set-piece and won two lineout turnovers and two scrum penalties, from the second of which Hegarty slotted his second penalty to edge the Queensland-based side back in front at 13-10.

The Lions responded by putting the Reds under a sustained period of pressure in the last ten minutes of the first half, resulting in Tupou receiving a yellow card as the visitors were penalised for multiple offences.

And from the resulting penalty, the Lions utilised their numerical advantage to full effect by setting up the driving maul and allowing Schoeman to dot down at the back as Jantjies landed his first conversion of the match for a 17-13 lead for the hosts at half-time.

Green almost had his hat-trick early on in the second half but was denied by a brilliant last-ditch tackle from Reds wing Henry Speight, who just managed to force the Lions speedster in to touch in the right-hand corner.

The Reds tight five continued to dominate and it was through this particular set-piece they put the Lions under a sustained period of pressure which eventually tolled when the livewire McDermott went in under the posts with a sniping dart from close range on the hour mark.

The topsy-turvy nature of the game continued as it was the Lions' turn to put the Reds under pressure which finally translated into points when Skosan made the clean break to grab his first try of the season.

Jantjies added a late penalty to give the Lions a seven-point lead, which they held on to until the final whistle. 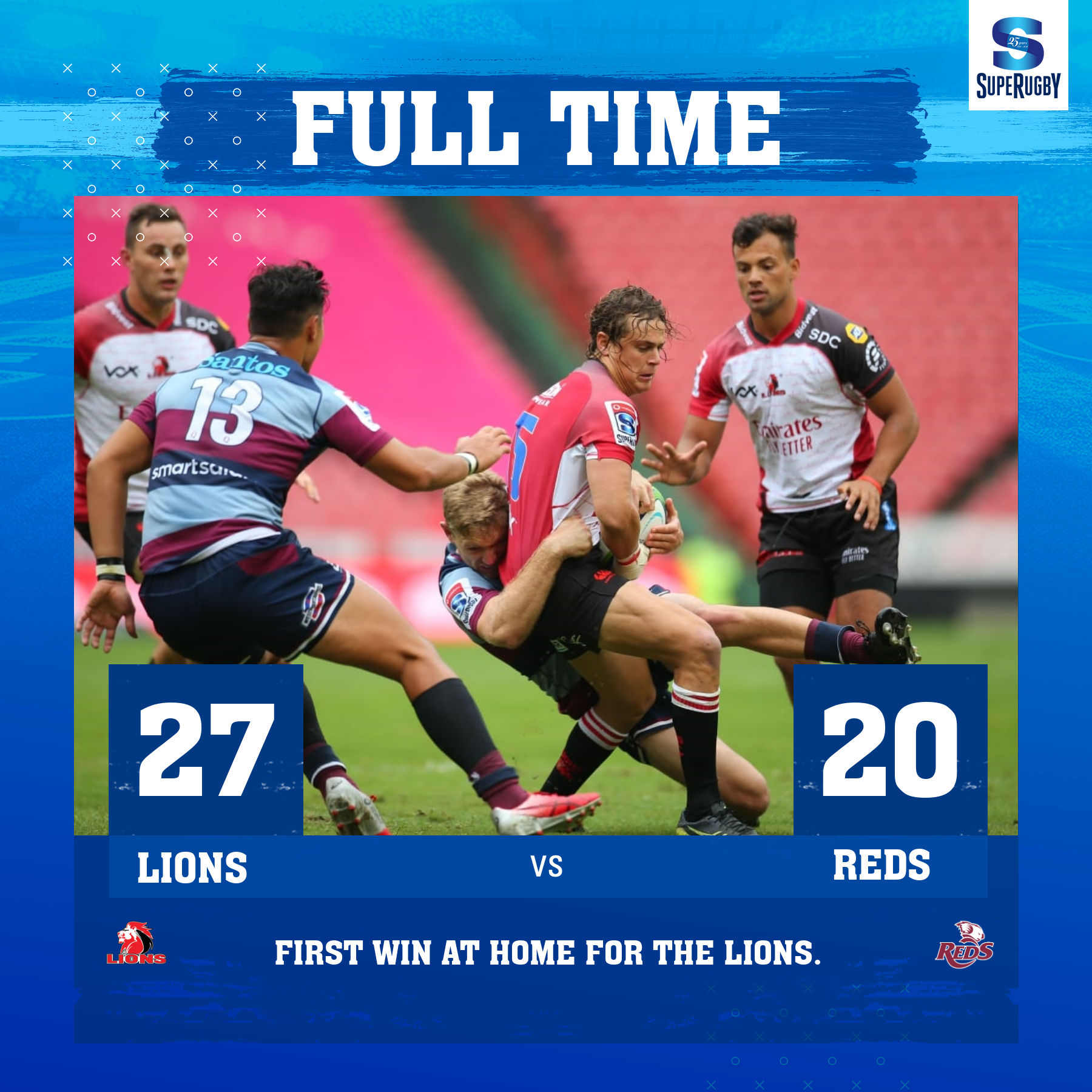