A 14-man Lions outfit continued their domination of the South African 2 Conference following a comfortable 54-10 triumph over the Kings.

Despite the loss of Robbie Coetzee for a knee to the head of Chris Cloete in the first half, the hosts scored eight tries as they easily dispatched their rivals.

Only two of those came before Coetzee’s recklessness, however, when Andries Ferreira and Courtnall Skosan touched down. Instead, the red card revitalised the Lions, who had lost their way after a positive start, with Kwagga Smith (twice), Malcolm Marx, Jacques van Rooyen, Faf de Klerk and Andries Coetzee completing the win.

Luzuko Vulindlu scored a consolation for the Africa 2 Conference’s bottom placed team but it was the hosts that went away with a tenth win in a row.

The Kings’ impressive resurgence had seen them secure three victories in succession before their home defeat to the Brumbies but, against the second best team in the competition, they were unable to make it four in five.

Without the excellent Lionel Cronjé at stand-off, the visitors struggled for continuity in the early stages and the Lions benefited from that front-foot ball.

Ackermann’s men dominated and proceeded to put the Port Elizabeth-based outfit under pressure at the maul. It eventually led to a yellow card for Irné Herbst and, without one of their crucial cogs in the lineout drive, the away side succumbed as Ferreira touched down.

In many respects, that score was atypical of the free-flowing hosts, but they soon displayed the full range of their capabilities by constructing a wonderful try.

Two mainstays of their side came to the fore when Elton Jantjies produced an inch-perfect cross-field kick for new Springbok captain Warren Whiteley to collect.

Whiteley had little time and space to work with but the number eight managed to get his off-load away to Skosan, who crossed the whitewash unopposed.

Pieter-Steyn de Wet then reduced the arrears for the Kings before a moment of stupidity from hooker Coetzee saw the Lions down to 14 men after his knee connected with Cloete’s head.

The flanker was also sent from the field, although he only received a yellow card for two separate offences leading up to Coetzee’s indiscretion.

That should have enabled the visitors a way back into the contest but Ackermann’s team dealt with the setback impeccably.

Tries for Smith and Marx either side of the interval effectively ended the match as a contest before excellent hands allowed Van Rooyen to touch down. 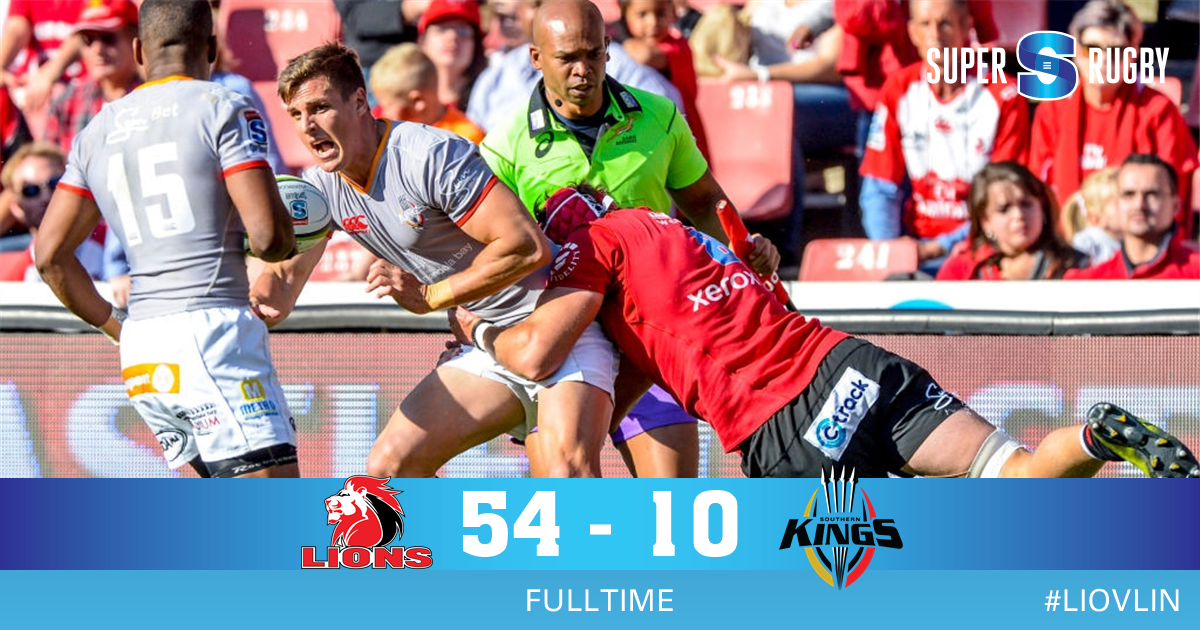 The Lions were rampant and a wonderful run by Marx gave Smith his second try. The replacement hooker went on a barnstorming charge down the right, off-loaded to Coetzee whose pass to the blindside allowed him to cross the line.

By this point only 55 minutes had elapsed but Vulindlu briefly stemmed the haemorrhaging by touching down for the Kings. However, the hosts had the final word via De Klerk and Coetzee as they went away with a dominant victory.