The Crusaders made short work of their South African counterparts in Super Rugby on Friday morning, running out comfortable 36-10 winners against a tired-looking Lions outfit.

In a repeat of last year’s final, the home side were deserved winners as they had a bulk of the possession and territory and eventually outscored their opponents by to claim their 25th consecutive home victory.

George Bridge and Sevu Reece scored a brace of tries apiece for the Crusaders and Braydon Ennor also crossed the whitewash while Richie Mo’unga succeeded with four conversions and a penalty.

The Lions came into this match with plenty of confidence after beating the Chiefs in Hamilton last weekend but they were dealt a massive setback when their captain and number eight Warren Whiteley was ruled out after failing a fitness test at the team’s captain’s run on Friday.

Their points came via a try from Ruan Combrinck as well as a penalty and a conversion from Elton Jantjies.

As expected, this was an entertaining affair with both sides giving the ball plenty of air and the match started at a frenetic pace with plenty of end-to-end action.

The Crusaders were fastest out of the blocks and opened the scoring in the fourth minute when Ennor gathered a pass from Reece before outpacing the cover defence on his way over the try-line.

Mo’unga added the extras and also slotted a three-pointer off the kicking tee shortly afterwards before Jantjies opened the visitors’ account with a penalty of his own midway through the half.

The Crusaders continued to dominate, however, and in the 35th minute Reece combined power and pace to cross for his side’s second converted try, which gave them a 17-3 lead at half-time.

The champions came out firing after the break and were up 31-3 by the 51st minute thanks to two well-taken tries from Bridge before the Lions struck back with a five-pointer from Combrinck shortly afterwards.

Just before the hour-mark, Reece stabbed a grubber kick through deep inside Lions territory and beat Ross Cronje to the ball to score his second try. That sealed an emphatic win for the champions and although the Lions tried gallantly to score a consolation try during the game’s closing stages, it was not to be as they were met by a solid defensive effort from the Crusaders. 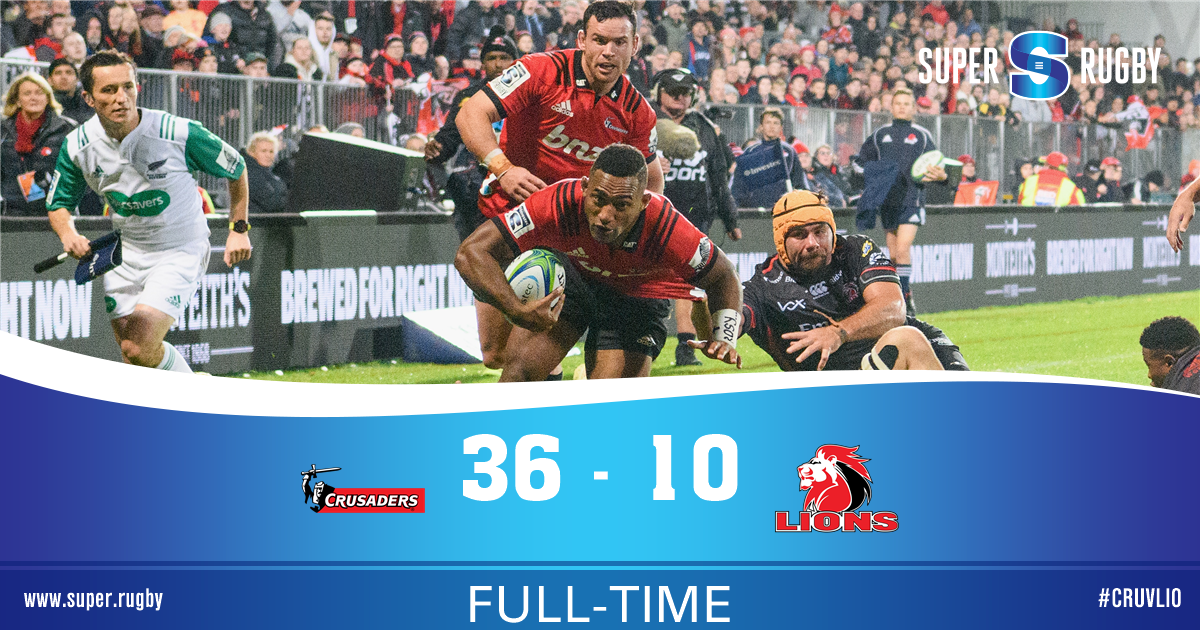