The Lions will play in the Super Rugby semi-finals for the third successive year after defeating the Jaguares 40-23 in Johannesburg.

Successive Nicolas Sanchez penalties had given the Argentinians an early 6-0 buffer, but Swys de Bruin’s outfit soon showed why they have reached the showpiece event over the past two seasons and responded with 24 unanswered points. Ruan Combrinck, Harold Vorster and Malcolm Marx all crossed the whitewash to open up a seemingly comfortable 24-6 advantage.

The Jags were evidently stunned but they re-found their form towards the end of the half and reduced the arrears via the boot of Sanchez. They then touched down twice in the opening 10 minutes of the second period via Bautista Delguy and Pablo Matera.

An Elton Jantjies three-pointer was sandwiched in between those scores before Andries Coetzee’s try effectively completed the win before it was rubberstamped by the fly-half, who added six more points from the tee.

Mario Ledesma’s men were the Lions' closest challengers during the regular season and they showed their quality early on, but the hosts’ experience eventually told.

The Jaguares began brightly, putting the home side under pressure and earning two penalty opportunities, which Sanchez converted for a 6-0 lead.

Back came De Bruin’s outfit, however, dominating the scrum battle and placing the visiting forwards under significant duress. Their fly-half then spotted space on the outside and produced an inch-perfect cross-field kick for Combrinck to collect and finish in the right-hand corner.

Jantjies converted and then added a second from the tee when the kicking game once again played havoc with the opposition defence. Delguy failed to gather Aphiwe Dyantyi’s grubber through and Vorster was on hand to pick up and touch down unopposed.

Having started on the front foot, the Argentinians were now regularly being sent into reverse gear, but they were not helping themselves. Ledesma’s charges continued to make mistakes and one such error saw Marx intercept a stray Gonzalo Bertranou pass and cross the whitewash for the third try.

The Jaguares did regain their composure with Sanchez scoring another three-pointer just shy of the interval before they got themselves back into the contest at the start of the second period. It came from a well-constructed effort as good hands provided Delguy with some space to work and the wing brilliantly rounded the final defender to finish.

Jantjies kept the visitors at arm’s length from the tee but the Jags refused to yield and Matera powered over to take them to within four points of the hosts.

De Bruin’s side displayed all their experience, however, and retained possession impressively. Replacement Marnus Schoeman carried well and Coetzee was the one to benefit from the back-row’s efforts, crossing the line by the left-hand upright.

Although the visitors attempted to get back into the contest, the Lions’ defence was too strong and Jantjies sealed their progress into the last four with a drop-goal and penalty. 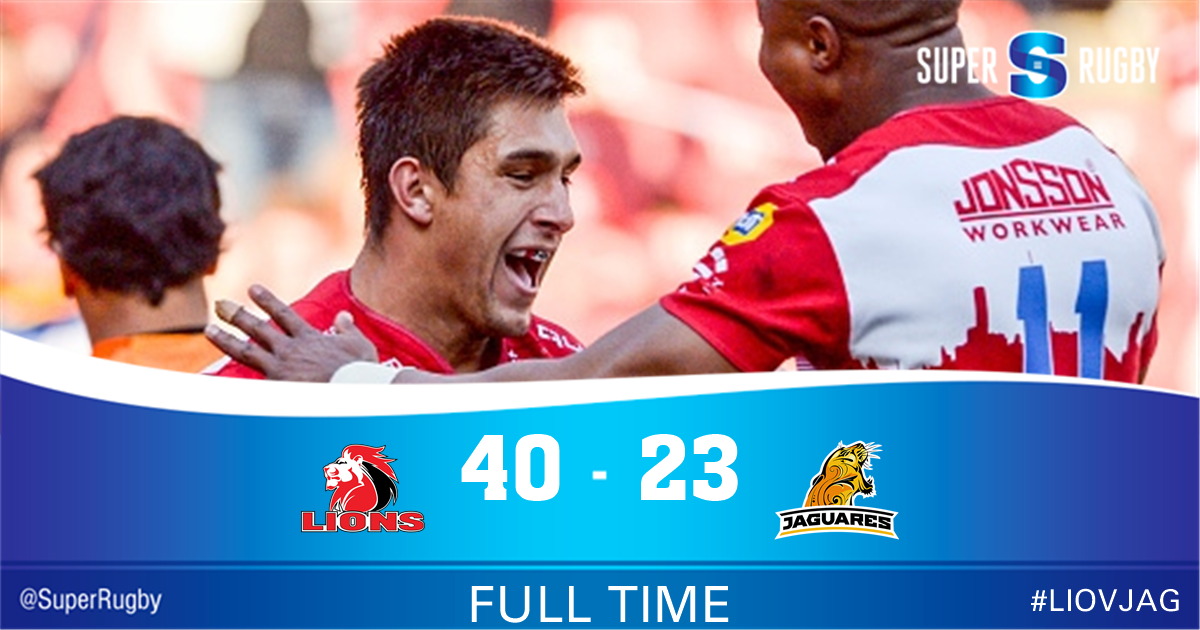