A stellar all-round performance from Elton Jantjies guided the Lions to a 39-22 victory against the Cheetahs in Johannesburg on Saturday.

Instrumental in two and scoring one of the three first half-tries Jantjies dictated matters for the home side. The number ten scored 14 of his side's first half points as they headed into the break with a scoreline of 24-3.

Neil Marais' 10th-minute penalty was the visitors only first half points, but they did however deny the Lions a bonus point victory with two late tries from Tiaan Meyer and Jacques du Toit.

Lions' captain Warren Whiteley, replacement flanker Cyle Brink and Ruan Ackermann ran rampant as they linked with the backline and tested the Cheetahs' defence creating space not only out wide but in the middle. Midfielders Lionel Mapoe and Howard Mnisi also interlinked with the ever present Ruan Combrinck gaining valuable metres to secure a 17-point victory.

An early mistake from Faf de Klerk handed the Cheetahs the ball deep inside Lions territory after the scrum-half kicked the ball directly into touch, setting up an ideal attacking position from which Paul Schoeman thought he scored only to be denied by referee Stuart Berry after Clayton Blommetjies' pass went forward.

A penalty awarded to the visitors after Mapoe and Mnisi caught for being offside allowing Marais to convert an easy three pointer for the first points of the game at 0-3.

Jantjies scored the first try of the match from a move that he started, the fly-half putting Mapoe into space only to be tackled metres short of the try line, as quick recycled ball allowed the number ten to crash over. Combrinck made no mistake with the conversion to make the score 7-3.

A further three points was added moments later by Jantjies – the regular kicker did not attempt his try's conversion given he was shaken up after the Cheetahs defence attempted to stop him from scoring – to take the scoreboard to 10-3.

Combrinck busted through tackles from Francois Venter and Uzair Cassiem to send De Klerk in for the Lions' second try, Jantjies making no mistake with the conversion.

Drifting across the face of a Cheetahs' line of defenders, Jantjies switched with Mnisi and sent the inside centre over to score the home side's third try. The fly-half making no mistake with the conversion and took the score to 24-3 as the players headed into the locker rooms with the Lions in fine form.

A storming run from Whiteley linking up with replacement Brink – after Jaco Kriel withdrew early – involved as an overhead pass from De Klerk sent Ackermann over for another Lions' try.

It was an individual display of skill that allowed Sergeal Petersen to step three Lions players and go over in the corner for the Cheetahs first try in the 48th minute. Lood de Jager forced a knock-on from de Klerk after a smashing tackle from the towering lock, Marais missing the conversion as the score remained at 31-8.

The fast pace of the game took its toll on the players as the next points in the game only came in the 67th minutes when Tian Meyer went over for the Cheetahs second try, Marais added the extras that took the scoreboard to 31-15 as the last ten mintes approached.

This try meant that the Lions were robbed of the try bonus point that they held for more than 40 minutes.

A late second half try from replacement hooker du Toit made the scoreline look more respectable with Marais missing the conversion and the scoreboard read 34-22.

Replacement prop Corne Fourie however went over for the Lions' fifth try after the hooter sounded to cap off a dominant afternoon for the home side, with Jantjies failing to convert and making the final score 39-22. 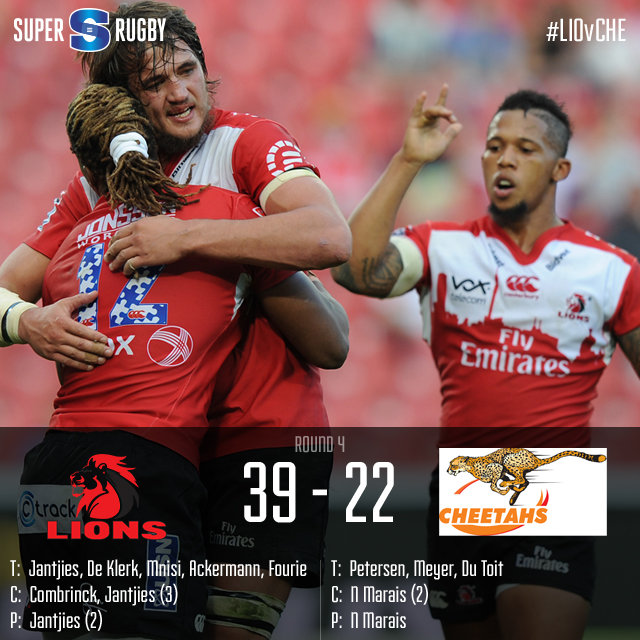