Lions Prove Too Strong for Highlanders

The Lions got themselves back in the Finals race in the South African conference with a 38-29 victory over the Highlanders at Ellis Park.

Both teams manged to score five tries on the day, but the hosts ultimately came out on top thanks to the deadly boot of flyhalf Elton Jantjies, which kept them in front.

The Highlanders scored the game's first try in the fifth minute. The home side lost the ball forward and Matt Faddes' kick over the top down the left wing was collected by Courtnall Skosan, who was penalised for holding on. The visitors took a quick tap from the penalty and swung the ball out right catching the Lions' defence napping, with Sio Tomkinson doing well to keep his width and create the space for an easy finish in the corner. Fly-half Josh Ioane failed to convert.

Both sides were looking to run the ball, even from deep in their respective halves, which made for an entertaining, end-to-end game.

The Lions hit back in the 13th minute. Fly-half Elton Jantjies offloaded for Kwagga Smith, who broke the line and ran 40 metres down the left wing before passing inside to full-back Andries Coetzee, who stepped past Faddes and went in under the posts for a superb team try. Jantjies added the extras for a 7-5 lead.

The men from Otago got their second try five minutes before the interval. Faddes made the break down the right wing and looked to have released Sio Tomkinson, but the wing was denied by a last-ditch ankle tap by Coetzee. However, the ball was recycled back to the left and after a series of carries, Ioane put lock Tom Franklin through a gap and over the whitewash with a neat offload for a 12-7 lead after Ioane converted.

However, it was Swys de Bruin's side who went in to the interval in the ascendancy at 14-12 after Smith completed a routine finish and Jantjies converted. Franklin was lucky to escape a yellow card which would have resulted in a penalty try due to a deliberate knock-down in the build-up.

Kwagga Smith then grabbed his brace in the 53rd minute when he took a quick-tap penalty and powered over from close range after persistent pressure from the Lions deep inside the visitors' territory. Jantjies added the extras for a 21-12 lead.

Aaron Mauger's side responded five minutes later. Having earned the right to go wide with a series of powerful carries up the middle, some slick hands freed Jordan Hyland on the overlap out on the left wing to dot down.

Soon after, the Highlanders completed the turnaround when they took the lead against the run of play. Scrum-half Aaron Smith came through the gate to steal the loose ball and ran 30 metres before drawing Kwagga Smith and releasing Faddes down the right wing, with the full-back having enough pace to cross the chalk. Hollinshead missed the conversion but the visitors still led 22-21.

Jantjies put the hosts back in front at 24-22 with the game's first successful penalty after Highlanders' replacement loose forward James Lentjes was penalised for not rolling away with 15 minutes to go.

The Highlanders looked to be wilting due to the effects of the altitude in the final quarter. Some lovely play from the Lions' backline with Sevens-style offloading and running off the ball resulted in Shaun Reynolds delivering what looked to be a killer blow in the 70th minute when he ran in under the posts. It came via a move that included slick passing from Jantjies and Aphiwe Dyantyi in the face of some heavy Highlanders' traffic. Jantjies' conversion took the hosts' lead out to 31-22.

The visitors still had more left in the tank, however, and after a lovely build-up, Ioane touched down at the base of the post before Dan Hollinshead converted to make it 31-29 with five minutes left on the clock.

But the Lions finally put the result beyond doubt with a minute to go. Dyantyi showed searing pace out on the left wing before passing on his inside for Skosan to dot down as Jantjies took matters beyond the Highlanders' reach with the conversion after the hooter. 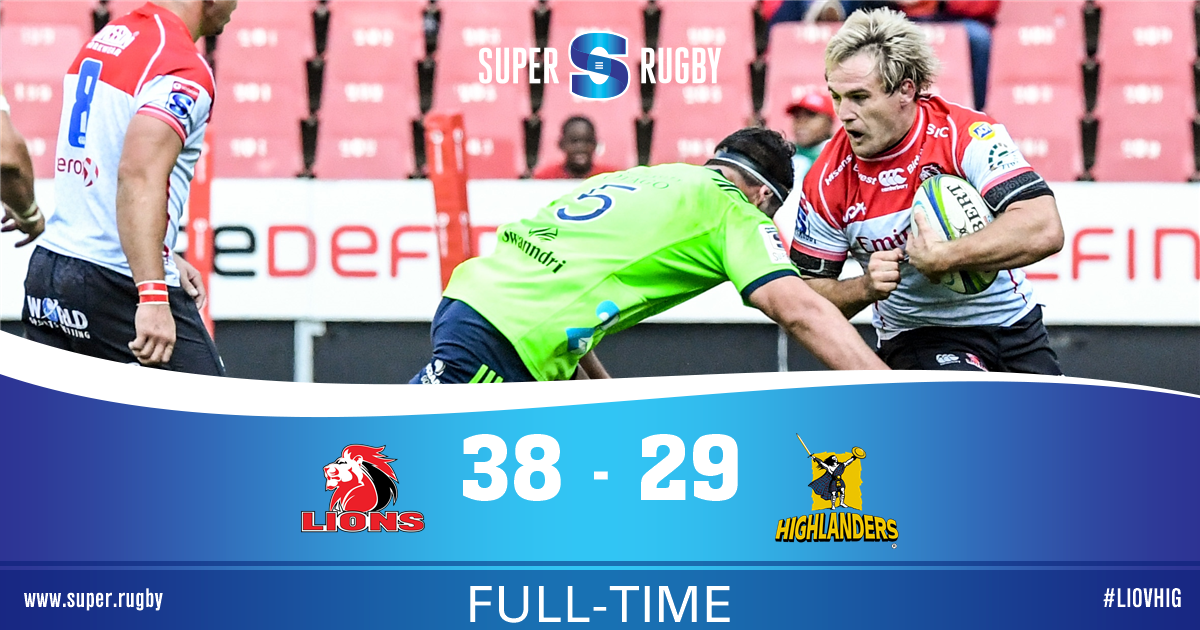