The Lions consolidated their position at the top of the South African Conference when they beat the Stormers 26-23 in Cape Town on Saturday.

In a tightly contested affair, momentum between the two sides ebbed and flowed but it was the men from Johannesburg who got the rub of the green in the end and eventually outscored their hosts four tries to two.

The Stormers had dominated most of the match but the game's complexion changed 10 minutes into the second half when Rhule was sent off for taking out Ruan Combrinck in an aerial duel.

The match started at a frenetic pace with both sides running the ball from all areas of the field and that approach yielded reward for the home side, who opened the scoring courtesy of a Dewaldt Duvenage try in the fourth minute.

This, when Jean-Luc du Plessis spotted a gap behind the Lions' flat-lying defence and delivered a perfectly weighted chip kick which Dillyn Leyds gathered inside the visitors' 22 before going to ground. The ball was recycled quickly with Ramone Samuels prominent and when he was stopped just short of the tryline, Duvenage gathered before diving over for the opening try from close quarters.

The Stormers continued to dominate and spent large periods camped inside the Lions' half but they had to wait until the 19th for their next points - a Du Plessis penalty after Kwagga Smith played the ball from an offside position after Nic Groom knocked on at the back of a scrum.

The Lions were slowly clawing their way back and two minutes later Groom sold Samuels a dummy close to the Stormers' try-line before crossing for an easy try. Elton Jantjies added the extras which meant the Lions were back in the game with the Stormers holding a 10-7 lead.

The Stormers put that setback behind them, however, and were soon back on the attack inside the Lions' 22. And on the half-hour mark, they extended their lead when Craig Barry put in a chip kick which Raymond Rhule dived onto behind the Lions' try-line for a deserved five-pointer.

Du Plessis did well to land the conversion from close to the touchline but the Stormers were dealt a blow in the 37th minute when JJ Engelbrecht was sent to the sin bin for a dangerous tackle on Andries Coetzee.

But despite playing with 14 men, the Stormers finished the half stronger and had a chance to extend their lead on the stroke of half-time, after the Lions were blown up for an indiscretion at a ruck but Du Plessis' shot at goal hit an upright which meant the Stormers held a 17-7 lead at half-time.

The Lions were fastest out of the blocks in the second half and soon after the restart they had two forays into the Stormers' 22 but on both occasions they conceded penalties when close to the home side's try-line.

The Lions continued to launch several attacks and were handed a lifeline in the 50th minute when Rhule was red carded for his shoulder charge on Combrinck in the air.

With 14 men on the field, the Stormers lost their defensive shape and four minutes after Rhule's exit, Corne Fourie broke away from a maul deep inside the home side's half before crashing over for his side's second try.

Things went from bad to worse for the Stormers when Jaco Coetzee was also yellow carded for a late hit on Jantjies and shortly afterwards Fourie barged over for his second try off the back of a lineout drive.

Jantjies added the extras, which gave his side a 19-17 lead but, to their credit, the Stormers did not surrender and regained the lead thanks to two penalties from Du Plessis.

The first one came in the 66th minute when the Lions infringed at the breakdown and five minutes later, Du Plessis slotted his second one after the visitors' conceded a penalty at a scrum.

The Lions did not panic though and sealed their win in the 74th minute after they launched a lineout drive deep inside the Stormers' 22. The ball came out to Hacjivah Dayimani at the back of the maul and he did well to break away before offloading to Madosh Tambwe, who crossed for the match-winning try. 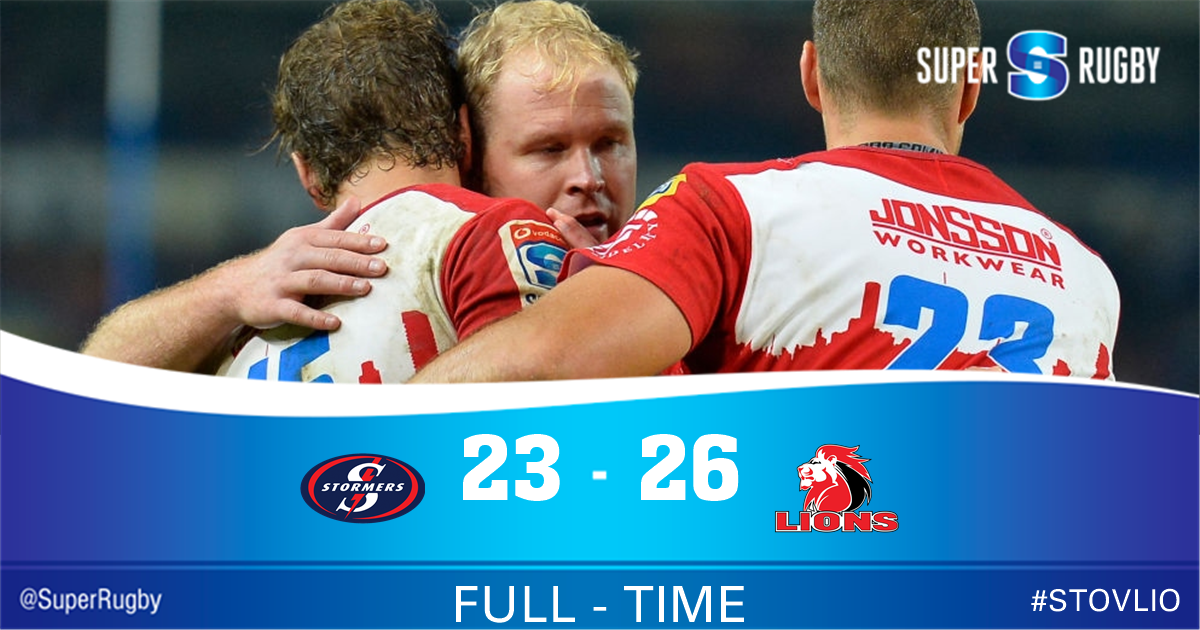