Lions sink the Sunwolves with dominant second half showing

The Lions had too much firepower for the Sunwolves in Tokyo on Saturday night, as they ran out convincing 37-24 winners.

The result leaves the Sunwolves with just one win from six matches so far this season, amid reports they will soon be axed from the Super Rugby competition.

The home side got things underway in fine style with an impressive line break from Gerhard ven den Heever, and they should have had they first try shortly after when Jiwon Koo went over, only for the TMO to rule it out despite pictures seemingly showing the ball being grounded on the line.

It only served to delay the inevitable, however, as the Japanese outfit awarded a penalty try just one minute later.

Sylvian Mahuza was the man judged to have spoiled a clear try-scoring opportunity by knocking down a pass from Semisi Masirewa to Rahboni Warren Vosayaco with the tryline beckoning.

Not only were the Lions now seven points down, but Mahuza was sent to the sin bin for his efforts.

The TMO was involved again four minutes later, with the Lions probably the ones being robbed this time. Once again referee Damon Murphy couldn't decide for himself if Stephan Lewies had grounded the ball over the line, and the man upstairs didn't have any better view of the action, leading to no try being awarded.

The visitors shrugged it off and were level within minutes, however, courtesy of a superb driving maul, with captain Malcolm Marx the man emerging with the ball in hand, before Elton Jantjies slotted the conversion.

Some pressure from the Sunwolves at the other end saw them come close to retaking the lead, but they were denied thanks to some sterling work from Marx on the ground, who managed to steal the ball twice to deny their charge.

That defence paid off shortly before half-time as the Lions scored their second try in much the same way as the first - through a driving maul, with Marx falling over with the ball in hand.

A long range three-pointer from Hayden Parker saw the Sunwolves get back to within two points early in the second half, but unfortunately for the hosts the game was about to get away from them.

It was another maul that set up the Lions' third try, though time it was scrumhalf Nic Groom who broke away and snuck out to the left before cutting back inside and going over.

And five minutes later they had their fourth, Groom playing provider this time as he fed the ball to Jantjies, who burst through a pair of tackles to score.

Neither try was converted, but the Lions now had a 10-point lead, and that soon became 17 as Lionel Mapoe bagged their fifth touchdown following a classy backline move that also involved Groom and center Wandisile Simelane.

Jantjies added the easy conversion to hand the Lions a 29-10 lead with 15 minutes to play, and there was no way back for the Sunwolves from there.

Eighth man Rahboni Warren Vosayaco did force his way in against the base of the upright for a seven-pointer, but a penalty goal from Jantjies shortly after kept the visitors well in front.

The result was put beyond any question five minutes from time through substitute Hacjivah Dayimani, who grabbed hold of a kick through from Jantjies to score his side's sixth try.

There was one more late consolation try for the Sunwolves from that man Vosayaco again, but it made little difference as the Lions held on for the deserved win away from home. 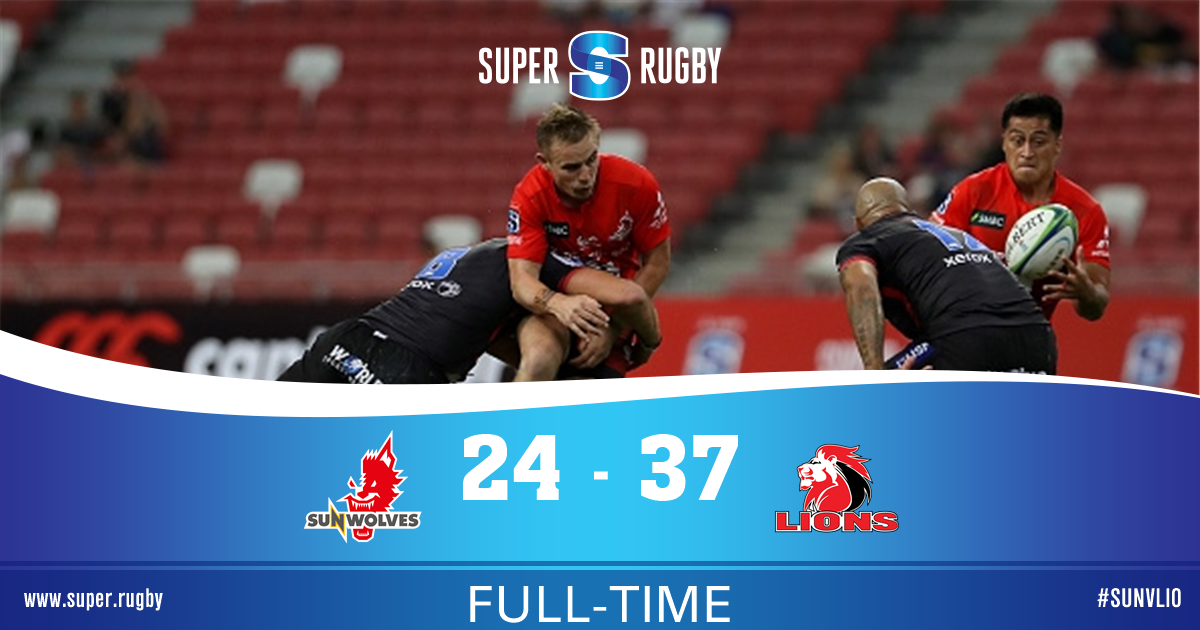