Lions slip at Sharks come back

The Sharks kept their quarter-final hopes alive with a 31-24 come-from-behind victory over the Lions in a South African Super Rugby derby at Kings Park in Durban.

The Sharks are now just two points adrift of the Jaguares in the last quarter-final place, having broken a seven-game losing streak against the Lions.

In a topsy-turvy encounter, the Lions enjoyed the overwhelming share of possession and territory and will feel they should have won the game, having led 21-11 at the break.

Instead, having been in front for most of the game, they relinquished their lead with just over ten minutes to go, never to get it back.

Tries from Daniel du Preez, Andre Esterhuizen and Lwazi Mvovo as well as 16 points from the boot of fly-half Robert du Preez proved too much for the visitors who scored through Ruan Combrinck, Cyle Brink and Kwagga Smith.

The Sharks secured the first penalty of the match when Warren Whiteley was penalised for going off his feet at the breakdown and opted for the corner. From the resulting lineout, the driving maul didn’t seem to be going anywhere until a second shove propelled number eight Du Preez over the line for a 5-0 lead with four minutes gone.

Soon after, the Sharks’ try-scorer Du Preez was then guilty of entering the maul from the wrong side with the Lions duly punishing the error. After the Lions had opted to put the ball in to the corner, a couple of good carries got the visitors close before Elton Jantjies swung the long pass out wide for Combrinck to ghost in on the overlap. The Lions fly-half converted for the 7-5 lead. 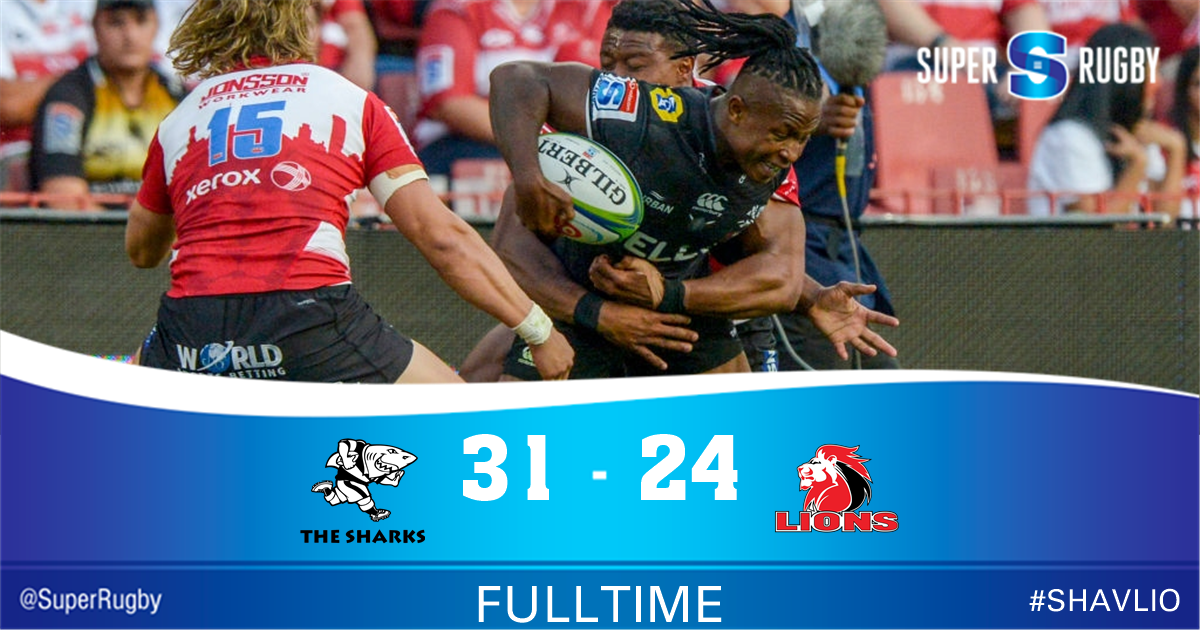 Sharks number ten Du Preez hit back with a penalty a couple of minutes later to snatch the lead back for the home side.

Against the run of the play and just when it looked as if a Lions attack wasn’t going anywhere, Brink produced a moment of magic, bouncing off both Makazole Mapimpi and Cameron Wright in a barnstorming 25-metre run to the line from a standing start. Jantjies added the extras for a 14-8 lead with 18 minutes gone.

The Lions were having all of the territory and possession but only had one more try before the interval to show for their dominance and it came right at the end of half. It was created by Springbok hooker Malcolm Marx, who broke his defender’s tackle out on the touchline, before playing in Smith for the easy run-in to the line. Jantjies made no mistake with the conversion as the visitors took a 21-11 lead in to the break.

But was the Sharks who were first to score after the interval through Esterhuizen – the inside centre dotting down in the left-hand corner, finishing off a superb team move that a started from an attacking scrum centre-field. Du Preez’s conversion brought the Sharks to within just three at 21-18 with just over a quarter of the match to go.

Soon after, the scored were level when Du Preez slotted his penalty between the posts after Lions prop Jacques van Rooyen was penalised for illegal scrummaging.

And with 13 minutes to go and against the run of play, the turnaround was complete when Sharks took the lead much to the home crowd’s delight as Mvovo intercepted Harold Vorster’s pass to run 50 metres to the line and complete the finish. Du Preez added the extras for a 28-24 lead.

The hosts enjoyed the better of the closing exhanges as Du Preez added a late penalty to seal a dramatic 31-24 victory.