The Lions survived an almighty scare to secure a hard-fought 40-38 victory over the Sunwolves in Super Rugby at Ellis Park on Saturday.

Swys de Bruin's side went into half-time leading 19-17 after a sloppy first half performance. They started the second half well but then allowed the Sunwolves back in to the game. However, they had enough grit to see them through.

The Sunwolves got the game off to a flying start, winning a penalty for offside and taking an early lead through the boot of William Tupou with just a minute on the clock.

However, the Lions hit back shortly afterwards, with Andries Coetzee fending off a tackle before scoring the first try of the game on the left in the eighth minute.

The hosts then scored their second in unusual fashion in the 19th. After obliterating the Sunwolves pack to win a scrum against the feed, the both Lions locks simultaneously pounced on the ball to dot down. Some sources credited the try to Marvin Orie and others to Lourens Erasmus, but either way, the Lions looked as if they were cruising.

However, the Sunwolves hit straight back. Lappies Labuschagne went close to going over the line, but was brought down just short. From there,  Kotaro Matsushima finished the job, scoring the visitors' first try in the 22nd minute.

It took just five minutes before the Lions gave themselves some breathing space once again, with Malcolm Marx powering over from close range on the right.

However, the Sunwolves refused to lie down and scored the last try of the first half. Yutaka Nagare initiated it with a clever kick over the top. The Sunwolves chased it down and put Ross Cronje under pressure before forcing a turnover. Craig Millar was the man to capitalise, scoring on the left in the 31st minute.

Despite ending the first half off on the back foot, the Lions turned the tide within a matter of seconds after the restart. Aphiwe Dyantyi charged down Harumichi Tatekawa's kick and went in for the try.

Back on the wing for the Sunwolves, Hosea Saumaki responded 10 minutes later, evading three tackles out wide and going all the way to score a superb solo try.

The Japanese side then sensationally took the lead in the 59th minute, with Kazuki Himeno intercepting a pass and running in under the posts.

A swift counter-attack saw Atsushi Sakate score in the 80th minute to keep the game alive, but the Lions ultimately held on for a nail-biting victory. 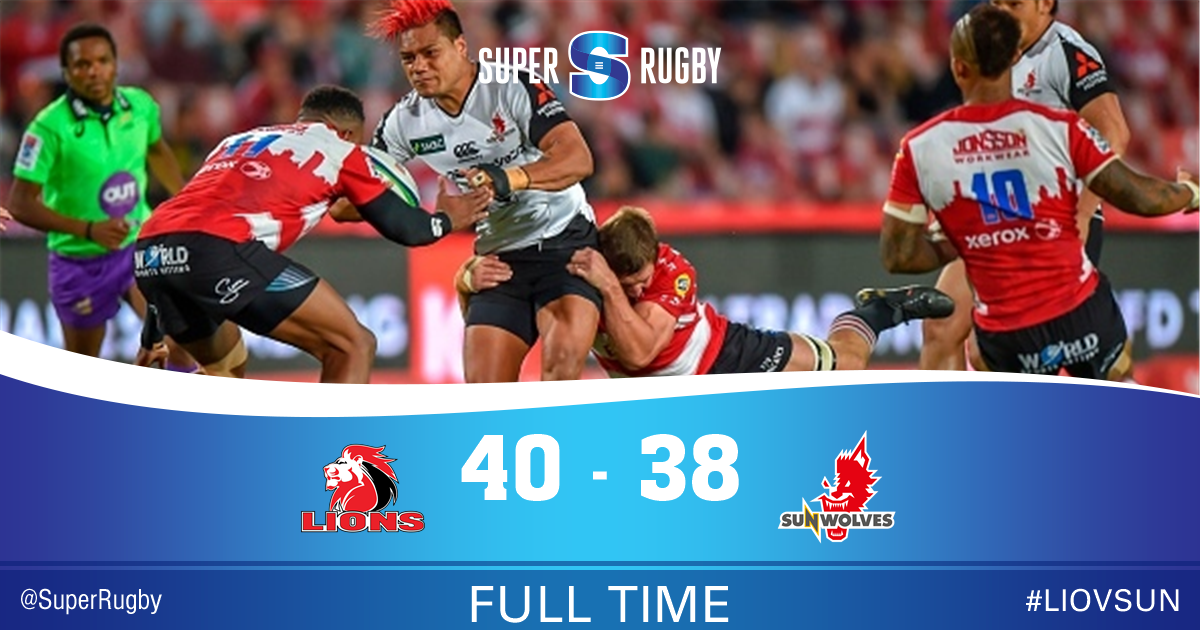