Substitute Ryan Lonergan nailed a penalty kick from 55 metres out in injury time as the Brumbies snatched an unlikely 27-24 victory over the Rebels in Canberra.

It was a cruel end to the match for the Rebels, who had done superbly well to keep themselves in the game right up until the very end, before Lonergan's heroics took the game away from them with the final kick of the contest.

The result means the Brumbies keep their 100% winning record intact, while the Rebels fall to their second straight narrow defeat of the season.

The Rebels made a good start from the kick-off, placing immediate pressure on the receiver with a great hit before earning a penalty at the breakdown via Cabous Eloff. Matt Toomua lined up the straightforward kick and put his side in front.

Moments later, Noah Lolesio returned the favour at the other end of the field following the Brumbies' first foray into Rebels territory, but again the home side made a hash of the restart, allowing the visitors to retake the lead via Toomua's boot almost immediately.

The Brumbies then suffered some misfortune when hooker Connal McInerney had to be helped off the field after falling awkwardly while making a tackle.

The Rebels spent several minutes camped in the Brumbies 22 and came desperately close to scoring, but they couldn't find a way to crack the home side's defence and there were high-fives all around when the Brumbies finally escaped the danger.

The visitors did eventually earn another penalty for their efforts, which Toomua narrowly converted to stretch their lead.

Having been on the receiving end for most of the match, the Brumbies showed their killer instinct when they scored with their first real attacking opportunity. From an attacking line-out up close, the forwards drove the ball towards the line before Lolesio kicked through a cheeky grubber for Len Ikitau, who got his hands down on the rolling ball to score. Lolesio converted the try he'd helped create as the Brumbies took a 10-9 lead. 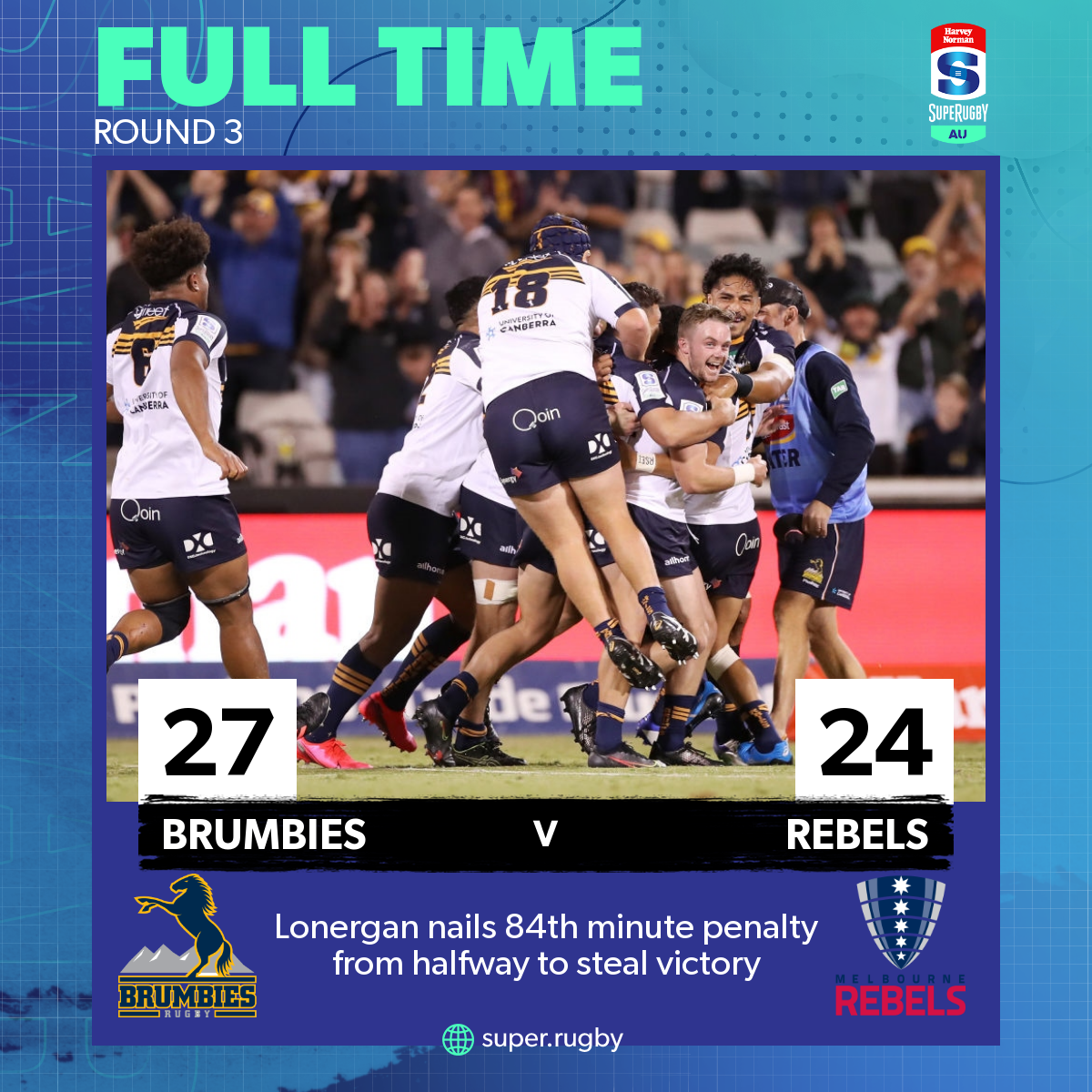 That try changed the complexion of the match, with the Brumbies now dominating both territory and possession. But after a long period of attack in which the hosts assaulted the Rebels' line time and time again, a desperate but committed defensive effort saw the visitors come away with the moral victory as a knock-on from Irae Simone finally saw the ball turned over.

Dan McKellar's men kept coming, but with time running out in the half, another turnover in possession allowed the Rebels a rare chance to break. From the ensuing attack, disaster struck for the Brumbies when their captain Allan Alaalatoa received a red card for making contact with the head of his opposite number Pone Faamausili in the tackle.

That gave Toomua a late chance to kick for goal and the flyhalf made no mistake as it finished 12-10 to the Rebels at half-time.

The Brumbies made a good start to the second period and were given a very kickable shot at goal early on, though on this occasion Lolesio couldn't convert.

Moments later, the Rebels looked to make the most of their one-man advantage but an unnecessary handling error saw the promising attack thwarted.

The Brumbies earned another kickable penalty but this time they opted for touch despite still being a man down. It turned out to be a great decision as one collapsed maul too many saw referee Damon Murphy not only award the penalty try but send Rebels hooker James Hanson to the bin for 10 minutes.

The Rebels had a chance to hit back almost immediately via Toomua's boot, and once again the captain was on target to bring them back to within two.

After another infringement near the Brumbies' 22 a few minutes later, Toomua made it six from six as the Rebels retook the lead once again.

If the Rebels weren't quite firing on all cylinders, the same could not be said of their winger Marika Koroibete, who made several impressive runs as he threatened to find the opening his side needed.

After a great line break from their forwards and a charging run up the field from Eloff, the Rebels spent several minutes camped on the Brumbies line, which finally ended with a yellow card for Andy Muirhead for repeated infringements. Toomua decided to take the shot on offer as the Rebels extended their lead to four with a little over 10 minutes to go. 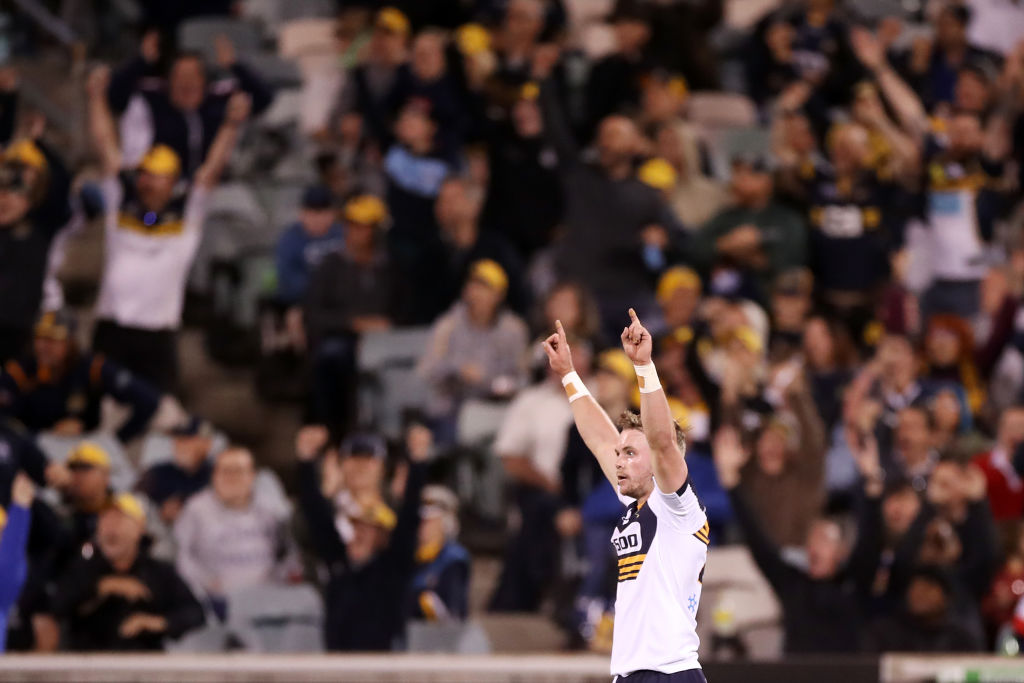 The Brumbies were given an opportunity to respond when the Rebels made an absolute hash of an incoming up-and-under, and the home side didn't need a second invitation. From the ensuing line-out in Rebels territory, a couple of phases took the ball upfield before substitute Ryan Lonergan produced a beautiful flick pass on his inside for Tom Banks, who beat the remaining defender before running in for the try. Lolesio converted as the Brumbies took a 24-21 lead.

Once again, some ill-discipline from the Brumbies shortly after the restart gave the Rebels a chance to hit back, and Toomua made no mistake to level the scores.

With time running out and extra time looking all but certain to follow, the Brumbies decided to run the ball from inside their own 22 and after several phases, they were awarded a penalty just inside their own half.

It was a long shot in more ways than one, but Lonergan decided to give it a go. In swirling breeze from around 55 metres out, the 22-year-old produced a perfect kick that snuck over the line by centimetres to hand the Brumbies the win in spectacular fashion - much to the delight of the entire squad who ran on to the field to celebrate.