Inspired by Captain America, Thor, Spider‐Man and Black Panther, South African rugby fields will come to life with more super hero action in 2020 as Vodacom Super Rugby, one of the toughest competitions in the world, continues its collaboration with Marvel.

The 2020 Vodacom Super Rugby season was officially launched at SuperSport studios in Randburg on Thursday, with an array of coaches, players, sponsor representatives and other key stakeholders in attendance for a live broadcast.

Apart from introducing the four South African franchises’ new jerseys – which include great new designs of their Marvel character-inspired super hero playing kit – it was announced that Vodacom Super Hero Sunday is coming to Gauteng next year.

Following a joint venture between SuperSport, Stadium Management SA and the Remgro-owned Stellenbosch Academy of Sport (SAS), all four SA franchises – playing in their jerseys inspired by the Marvel characters Captain America (Vodacom Bulls), Thor (DHL Stormers), Spider-Man (Emirates Lions) and Black Panther (Cell C Sharks) – will be in action on Sunday, 19 January at FNB Stadium in Johannesburg, less than two weeks before the serious action kicks off.

The Cell C Sharks and DHL Stormers will kick off the action at 13h00, followed by the match between the Vodacom Bulls and Emirates Lions at 15h15.

A number of the Springboks’ Rugby World Cup heroes from Japan will be in attendance at FNB Stadium, where tickets start from just R60, with a special group offer of four tickets for only R200 for a unique experience to watch all four South African teams in action on one day at one venue. 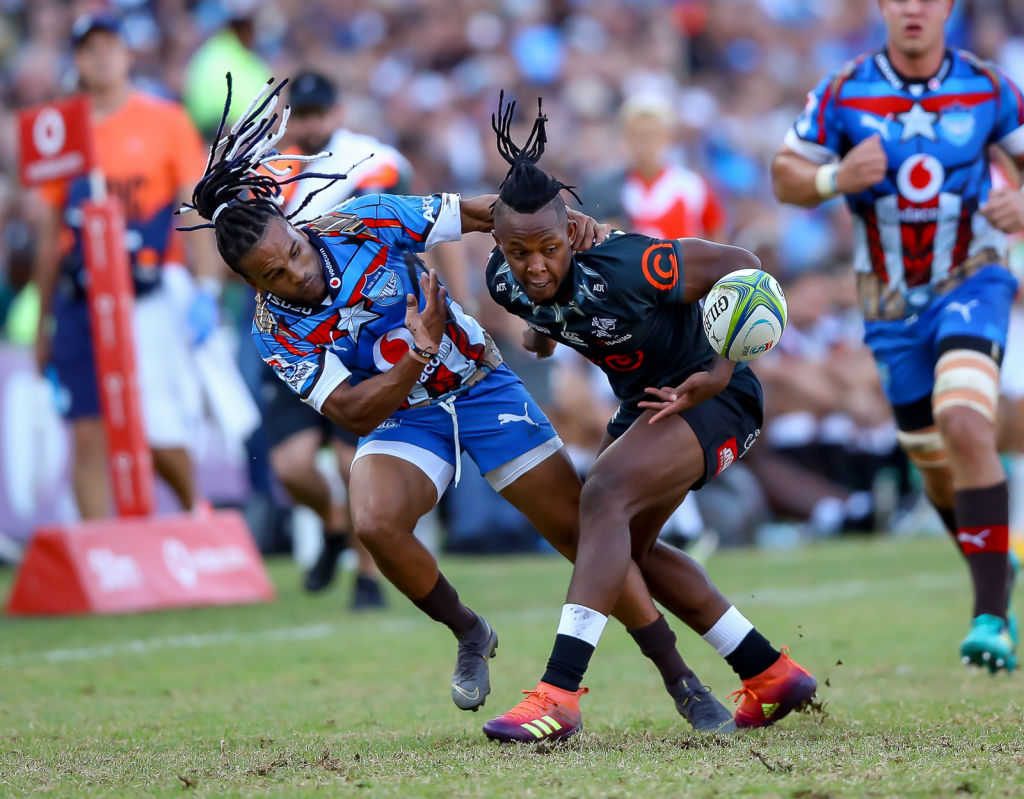 Tickets for Vodacom Super Hero Sunday will be available from Friday 29 November at Computicket outlets and online nationwide. A public transport and parking plan, which will include free parking in designated parking areas around the stadium, and park and ride services from Pretoria and Johannesburg, will also be in place.

“We have a new generation of rugby heroes in South Africa ready to make their mark in Vodacom Super Rugby in 2020,” said Mr Mark Alexander, President of SA Rugby.

“With three new coaches and a host of exciting new players stepping up to the plate, I’m sure the four South African franchises will want to build on the Springboks’ achievements this year.

“We’ve seen a re-energised enthusiasm for rugby in South Africa in recent months and that will spill over into 2020, when Vodacom Super Rugby will continue to impress with breathtaking rugby between the best players in the Southern Hemisphere.”

Vodacom Super Rugby kicks off on Friday, 31 January, with a replay of the 2007 final between the Cell C Sharks and the Vodacom Bulls in Durban. On Saturday, 1 February, the DHL Stormers host the Hurricanes in Cape Town, while the Emirates Lions take on the Jaguares in Buenos Aires. All matches, including those at Vodacom Super Hero Sunday, will be broadcast live on SuperSport.

The South African franchises will yet again show their support for the real super heroes of the CHOC Childhood Cancer Foundation, with their#TacklingCancer initiative.

Vodacom and SuperSport will jointly donate R100 for every tackle by a South African player during the 2020 Vodacom Super Rugby competition. And next year, fans will also have the opportunity to contribute to this great cause as R1 will be donated to CHOC for every Vodacom Super Rugby ticket purchased.

Vodacom will have a multitude of out-of-this-world stadium activations involving fans, players and celebrities all aimed at raising even more money for CHOC next season.

“This will be another season in which heroes in all forms will be celebrated – from the rugby players as the heroes on the field, to the fans for their loyal support, and then our real-life heroes from CHOC,” said Abey Mokgwatsane, Vodacom Managing Executive: Brand & Sponsorship.

“Starting with the Vodacom Super Hero Sunday double-header, featuring all four of the South African teams as a warm-up to the season at a highly competitive price, Vodacom Super Rugby will yet again bring supporters some of the very best rugby experiences, aimed at the whole family.”

The ground-breaking collaboration with Marvel made its debut last season in a Vodacom Super Rugby competition that changed the traditional face of the game and took it to an entirely new audience.

“We are delighted to once again be collaborating with Vodacom, SA Rugby and SuperSport on the Vodacom Super Rugby competition,” said Luke Roberts, General Manager of Consumer Products Commercialisation of The Walt Disney Company Africa.

“The response to the 2019 season was phenomenal, bringing the inspiration of some of Marvel’s most iconic, loved and recognizable characters to the thrills and excitement of this tournament. We certainly look forward to joining families across the country this coming year to witness all the skill, speed, agility strength, endurance, honour and strategy that brings this collaboration to life in in an even more spectacular 2020 season.”