A hat-trick from Jack Maddocks inspired the Rebels to a 37-17 bonus-point victory over the Sunwolves at Prince Chichibu Memorial Stadium.

The big difference between the sides was the set-piece, with the Sunwolves' lineout frankly abysmal at this level of rugby.

Also not helping the Japanese side's cause was the fact that they were experiencing something of an injury crisis despite it being so early in the competition, losing three players to the bench in the opening twenty minutes alone, seriously testing their depth especially considering last weekend's injuries.

As they were outclassed at set-piece and upfront, all the Sunwolves could do was try play the sort of fast-paced, unstructured rugby that has become the Japanese trademark.

Meanwhile, Rebels winger Sefa Naivalu was proving a threat everytime he got the ball, flooring two players in separate carries early on and it was the Fijian-born flyer who set up the game's first try.

Full-back Dane Haylett-Petty did well to retain possession after a massive hit on him in midfield. The ball was quickly shifted left with Jack Maddocks' long pass finding Naivalu close to the touchline, who brutally bumped off his defender in the one-on-one contest and galloped 40 metres down the left wing, before returning the favour to find Maddocks on the inside who had the easy run-in to the line.

Soon after, the Rebels doubled their lead when the Sunwolves butchered their third successive lineout, Sunwolves hooker Shota Horie overthrowing again. Once again, the ball was quickly shifted to the left side, where quick hands from Maddocks found Amanaki Mafi, who showed an impressive set of heels to dot down.

With 25 minutes gone, the Sunwolves got on the board after a high tackle on their New Zealand lock Sam Wykes. Ryoto Nakamura made no mistake with the penalty to cut the deficit to seven at 10-3.

With five minutes to go until the interval, the Sunwolves levelled matters as the Rebels were punished for overplaying. After the Rebels had turned over possession, Genia went wide quickly looking to hit the hosts on the break again. But this time, it backfired as

Timothy Lafaele read Haylett-Petty's pass to intercept and sprint in under the posts from his own half as the sides went in to the interval at 10-10.

Genia showed what a world-class scrum-half he is in making space for his outside backs as Naivalu sauntered over for his brace. It all came off the back of a strong Rebels scrum in centre field. Genia shifted his position off the back of the scrum at the last moment, making space for himself and catching the Sunwolves defence off-guard. He spun a long pass out to Maddocks, who provided the final pass for Naivalu on the overlap on the left wing in the 43rd minute.

Maddocks then grabbed his brace in the 48th minute, finishing off a superb backline move that featured slick passing, running off the ball and handling.

Soon after, the Rebels scored off the back of a scrum once again. This time, however, they went right, Genia positioning himself on the opposite side of another strong set-piece. The Wallabies scrum-half found fellow Wallaby Reece Hodge, whose clever inside pop pass found Maddocks, who ran on to the ball with serious momentum, breaking clean through the Sunwolves defence and dotting down for his hat-trick after 53 minutes for a 30-10 lead.

With five minutes to go, Haylett-Petty received a yellow card for his third offside in a row, having been warned by referee Egon Seconds.

The Sunwolves were finally rewarded for a period of sustained pressure in which they were camped on the Rebels line for ten minutes when they grabbed a consolation try with two minutes left on the clock as Ed Quirk went over from close range after good work done by the Sunwolves forwards in the close quarters.

However, the Japanese side were unable to secure the losing bonus point by scoring again as there was still time for the Rebels to go up the other side of the field and claim a penalty try as try-scorer Quirk was yellow-carded for a deliberate knockdown when the men from Melbourne looked set to score with two players free on the overlap.

This meant the Rebels ran out 37-17 winners and won by a twenty-point margin to secure their second successive victory and remain unbeaten in this year's Super Rugby competition. 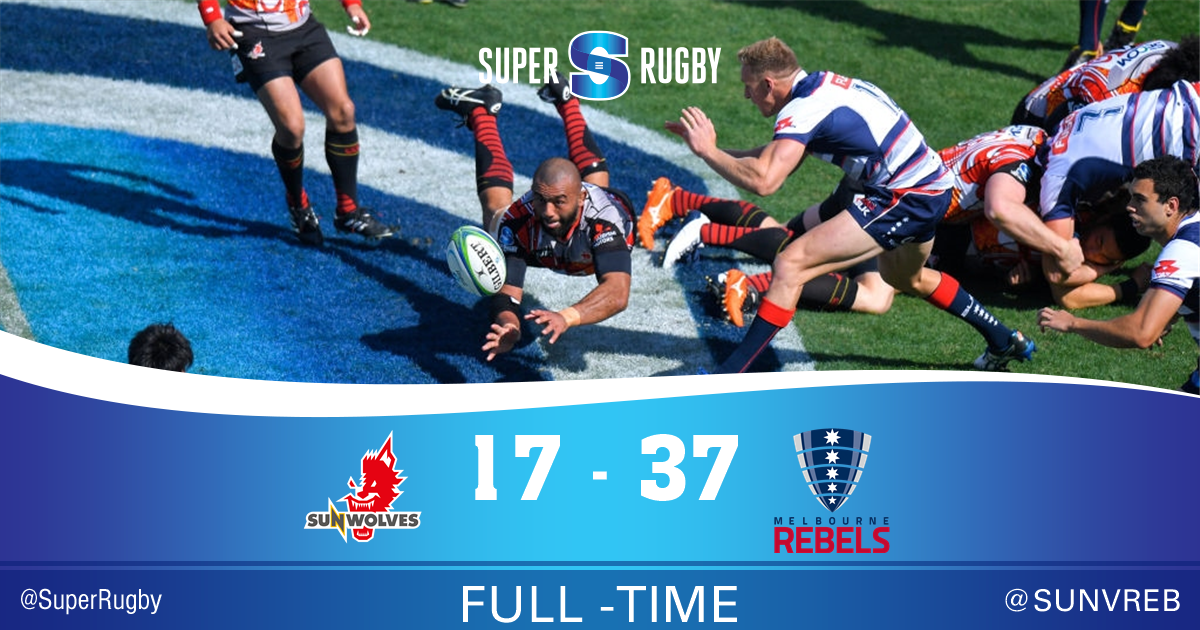