New Zealand Rugby will relocate its six Super Rugby Pacific squads to Queenstown to mitigate against the risk of COVID-19.

New Zealand Rugby (NZR) has made the decision to relocate the six New Zealand-based Super Rugby Pacific squads to Queenstown to mitigate against the risk of COVID-19 side-lining any of the teams.
NZR General Manager Professional Rugby & Performance Chris Lendrum said the move would provide the best chance of the inaugural season of Super Rugby Pacific kicking off as scheduled on Friday 18 February.

“Under current COVID-19 regulations, it would only take one positive case entering a squad environment to shut down an entire squad for 10 days. The knock-on effect for the rest of the competition would be the postponement or cancellation of matches,” Lendrum said.

“By moving the teams to a secure hub, we believe we have a good chance of preventing a COVID-19 infection, or close contact event, side-lining one of our teams for a prolonged period. The plan is currently for the teams to move to Queenstown early next week and remain in Queenstown for the opening three weeks of the competition.”

The Blues, Hurricanes, Moana Pasifika, and Chiefs will fly to Queenstown on charter flights, while the Crusaders and Highlanders will bus south over the coming weekend.

The squads will operate in separate bubbles with exclusive use of training facilities in the Queenstown area. Day matches will be played in Queenstown at the Wakatipu Rugby Club whereas teams will bus to and from Rugby Park in Invercargill for any night matches.

Matches are scheduled to be played according to the revised Super Rugby Pacific draw announced last December with all matches broadcast live and exclusive on Sky. All matches will be played without crowds at the red level of the traffic light settings. 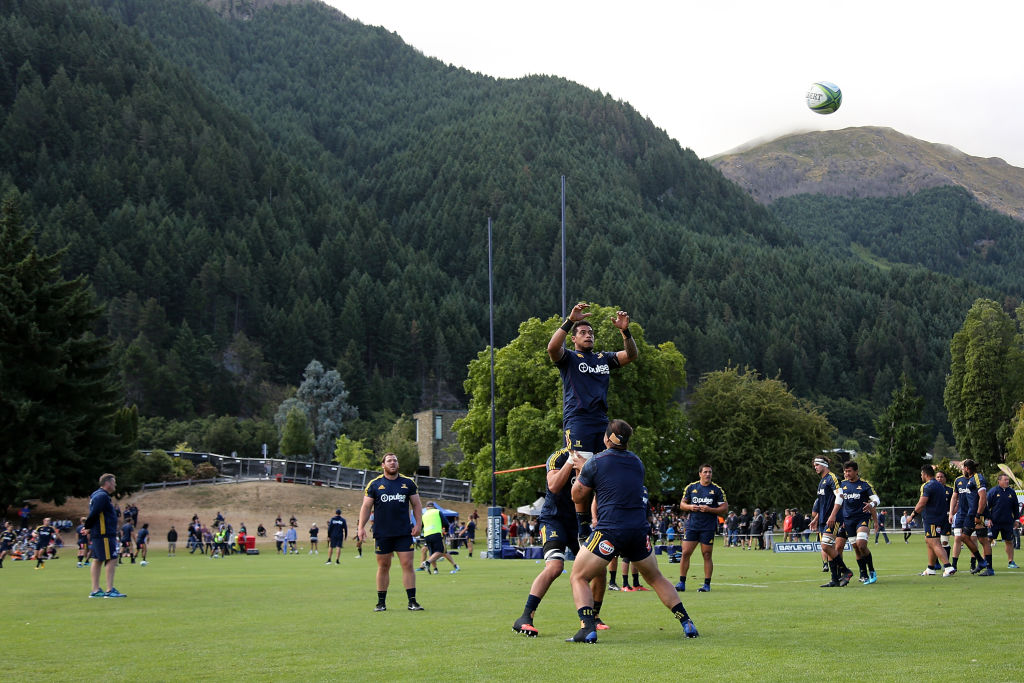 Highlanders pre-season training in Queenstown in 2018

Teams will stay in local hotels and will utilise COVID-19 protocols successfully implemented by the All Blacks during last year’s Northern Tour to Europe. While players and staff will be able to undertake some outdoor activities during their stay, they will remain in their team bubbles at all times and will be subject to regular rapid antigen tests.

Lendrum stressed the move to Queenstown was seen as a temporary measure with plans in place for teams to return to their home bases and regular venues in March. The timing of the move is based on recent modelling of likely infection rates.

We are committed to bringing the teams home in early-March regardless of the COVID-19 landscape."

“We realise there is a significant sacrifice in leaving whanau [family] behind to play these matches and we are grateful for the cooperation of our players, the New Zealand Rugby Players’ Association, Sky and also the Queenstown Lakes District Council who have accommodated our requests at short notice and providing facilities for our teams to train and play in the region.”