We select our Kiwi team of the last decade and what a team! Choc-a-block full of All Blacks of course...

The most capped Super Rugby player of all time Wyatt Crocket [pictured below] leads the front row having played 7,097 minutes in 202 matches. Crockett also scored the second most tries (9) and made the second-most tackles (729) amongst props.

Hard to argue with the lock combination of All Blacks Sam Whitelock and Brodie Retallick. Whitelock won more lineouts (367, inc. 51 steals) than any other New Zealand player in the last decade and made 1,053 tackles. Retallick played 7,898 minutes and made the most carries (694), metres gained (1,565), offloads (60) and beat the most defenders (81) of any New Zealand lock.

Kieran Read gets the nod at No.8 having gained the most metres (3,131) from the most carries (892) of any No.8 and was also one of only two such players to make 800+ tackles. No surprise that wrecking ball Ardie Savea gets the seven berth while the six jersey goes to Hurricane Brad Shields as his 722 tackles were the second most of any player to wear the No.6 jersey. Shields also won 59 turnovers, made 43 offloads and 36 clean breaks. 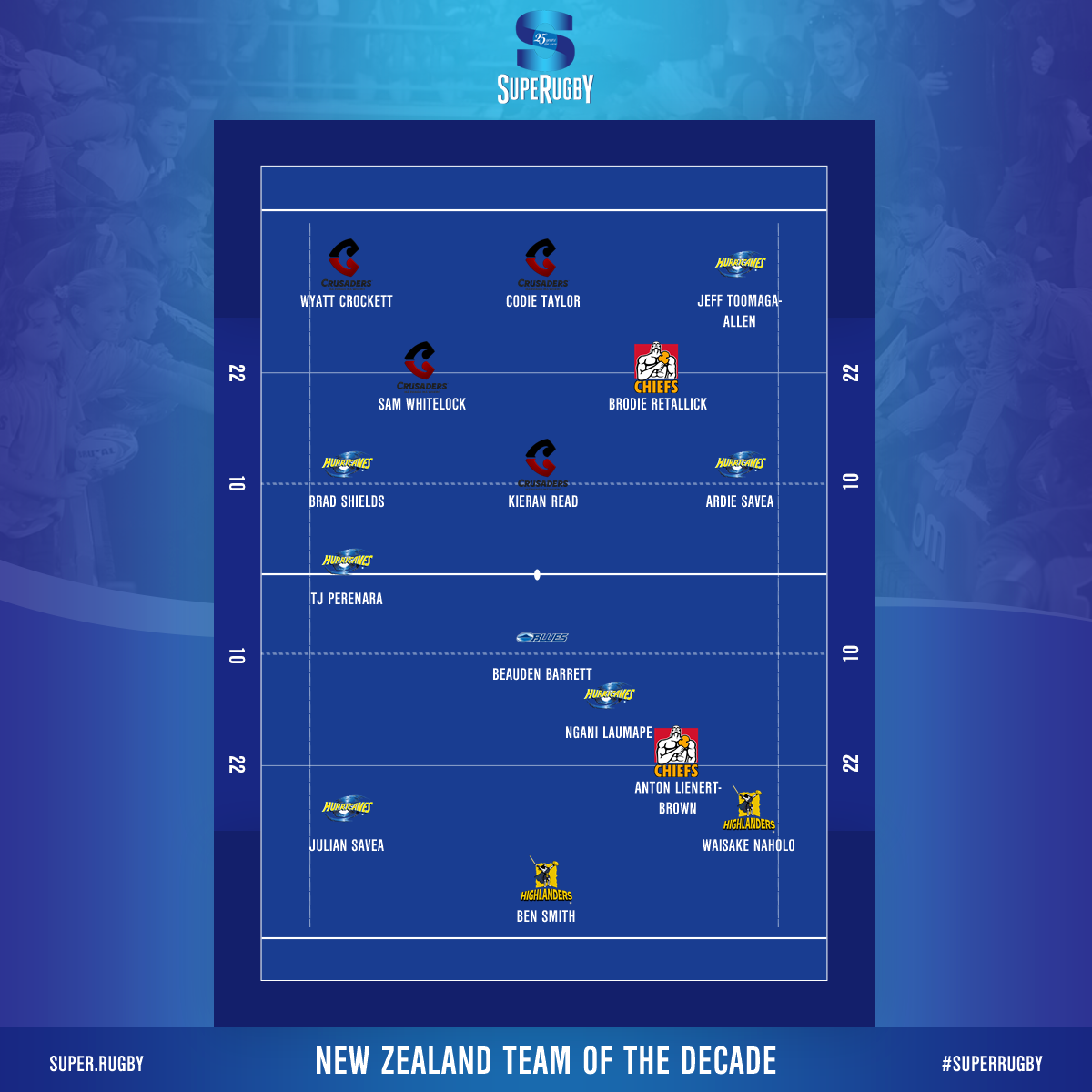 Highlander Ben Smith locks down the fullback spot with some impressive stats: He made the most carries (1,314) for the most metres gained (8,859) of any player in Super Rugby in the last decade; he also beat the most defenders (379) of any player in this period and scored 33 tries. He is joined in the back three by try-scoring wingers Waisake Naholo [45 tries] and Julian Savea [50 tries] who joins his brother in the team.

The centre combination is a powerful one with Ngani Laumape and Anton Lienert-Brown - still active their line-breaking and ability to beat defenders comes to the fore. The halves are not a surprise either with Hurricanes' scrum-half TJ Perenara getting the nod at nine. TJ scored the most tries (55) of any New Zealand player in the last decade, gained the most metres (3,445) of any scrum-half and was the only such player to make 100+ clean breaks (115).

At 10 is Beauden Barrett whose statistics are very impressive. He is the top point-scorer (1,238) in Super Rugby in the last 10 years, while no fly-half scored more tries (34) or beat more defenders (236); Barrett also made the second most try assists (60) of any player. He is the NZ Player of the Decade. 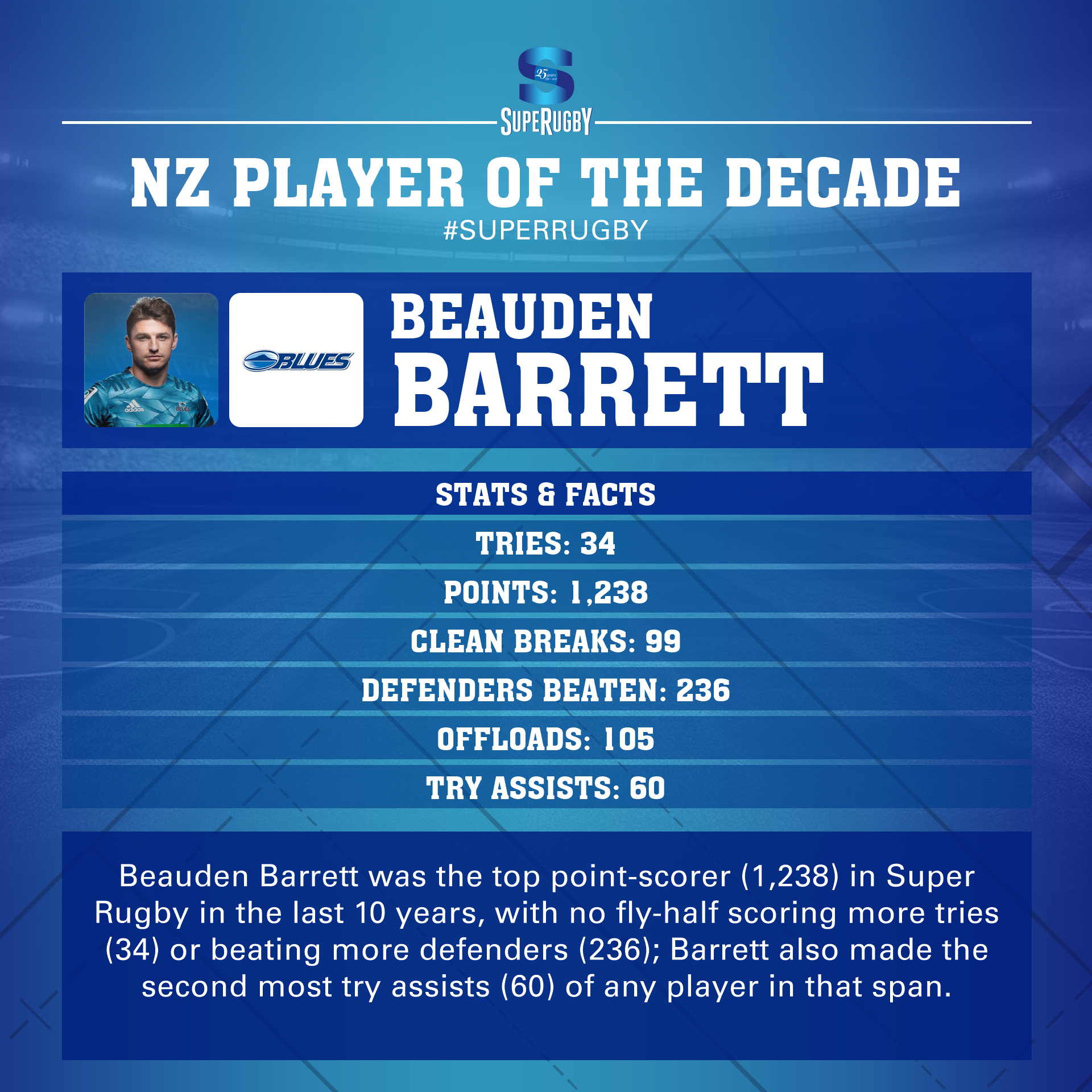 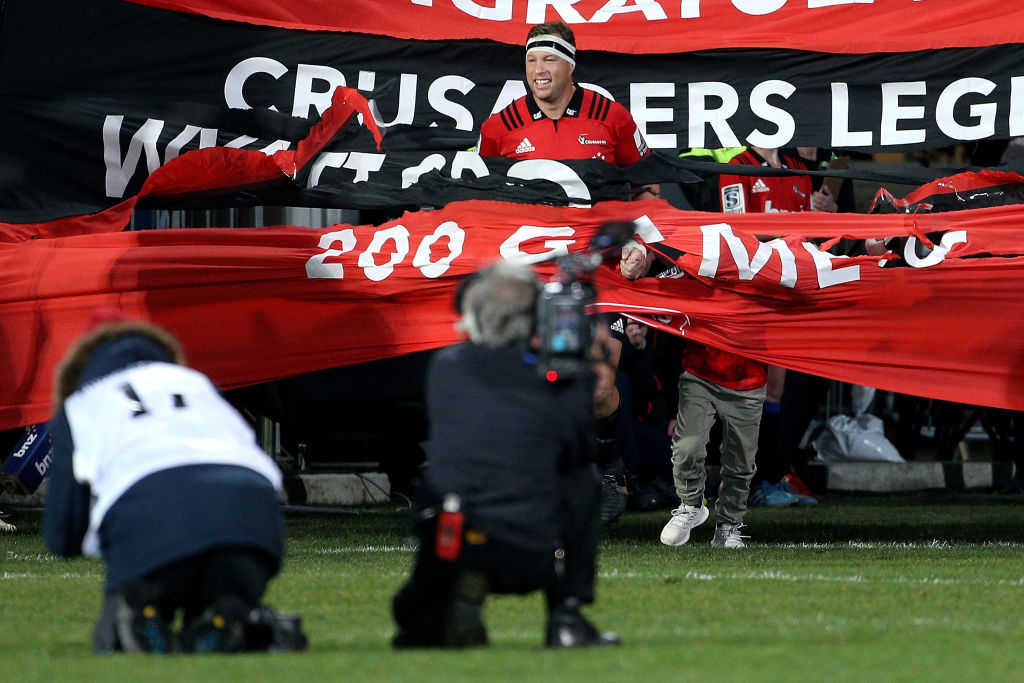