A superb first-half performance from the Chiefs laid the platform as they defeated intra-country rivals Highlanders 45-22 in Suva.

Everything was in excellent working order for the side now sitting third in the New Zealand Conference, with the two-time Super Rugby champions going into a 42-0 lead at the interval.

It was a remarkable opening half as Solomon Alaimalo, Toni Pulu (twice), Karl Tu’inukuafe, Luke Jacobson and Sean Wainui all crossed the whitewash.

Teihorangi Walden responded after the break with a brace for the ‘Landers while Aki Seiuli went over for their third try, but the damage had already been done. Although they prevented the Chiefs from gaining the bonus-point, following Shannon Frizell’s effort, it was a chastening evening for the Highlanders.

The Waikato-based outfit had struggled for consistency before the international break but they re-found their form in Fiji, scoring with regularity in the first half.

Anton Lienert-Brown, as he did for the All Blacks during the June series, displayed excellent hands for the opener. Alaimalo collected the off-load and the full-back did the rest, slaloming his way through some weak cover defence to touch down.

Aaron Mauger’s men were shell-shocked and the Chiefs continued to dominate, with their set-piece in good working order. That pressure led to Pulu crossing the whitewash before Tu’inukuafe went over from close range for a 21-0 advantage in the opening 15 minutes.

Waisake Naholo’s break suggested that the south islanders were not finished but mistakes were prevalent, including a rare one from scrum-half Aaron Smith.

Brad Weber outshone his more illustrious opponent and it was his opportunistic brilliance which allowed the Chiefs to touch down for their fourth. They had a penalty advantage following a dominant scrum before the ball bounced free, and Weber has on hand to off-load for Jacobson to score.

The wind was a factor and Charlie Ngatai’s remarkable kick from inside his 22, which bounced into touch after going almost 70 metres, was evidence of that, but the Highlanders were simply being outplayed.

Wainui’s superb finish added to the pain before Pulu completed an outstanding half for Colin Cooper’s charges.

With the match already won, the Chiefs eased off defensively and the men from Dunedin benefited as Walden touched down twice in quick succession to reduce the arrears.

Mauger’s outfit suddenly had the momentum. The Waikato side repeated the errors of their opponents by turning over possession in their own half regularly and the ‘Landers had a third try through Seiuli’s close range effort.

They created further chances but Cooper’s men stemmed the tide via Damian McKenzie’s penalty, although the Chiefs were denied the bonus-point because of Frizell’s late score. 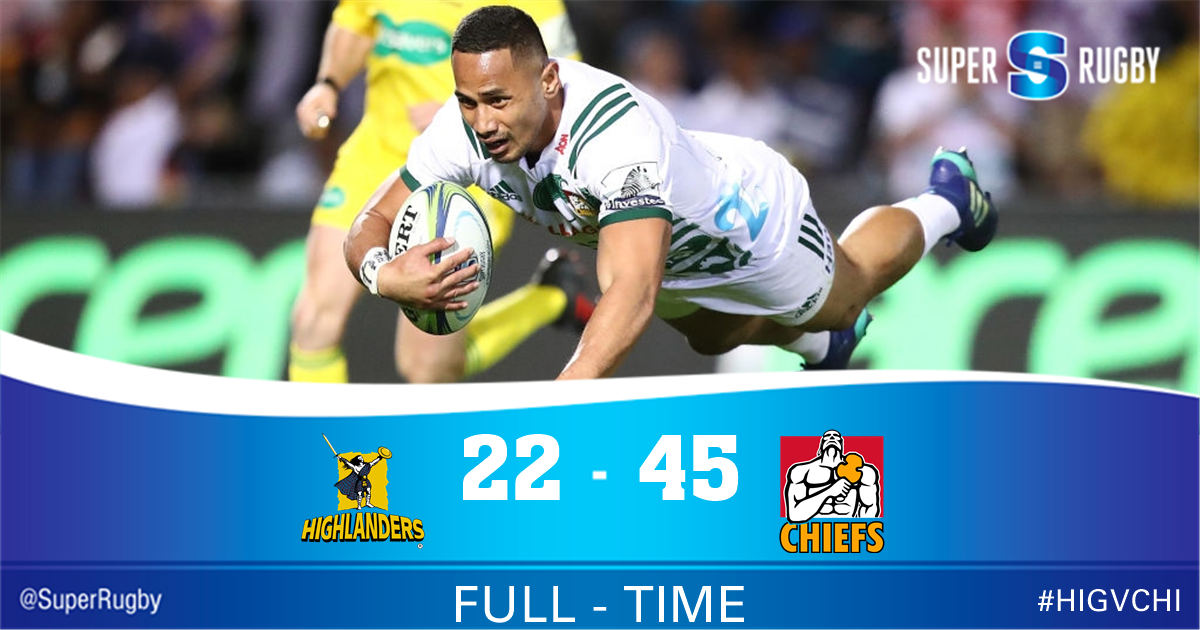