Play For 80 Minutes or perish

The Brumbies and the Chiefs will both be hoping for better second-half showings this week, after they both gave up half-time advantages and were pipped at the post in their opening matches last week. The Chiefs travel to Canberra where they have won just three times since 1997 (D1, L9). However, the Waikato franchise have racked up some huge points totals at GIO Stadium when they have gone on to win. In fact, their 48-23 win over the Brumbies in their last visit to Australia’s capital saw them notch up their third-highest score on Australian soil.

The Brumbies have a poor recent record against New Zealand sides on home soil; their 48-23 loss to the Chiefs was the start of a seven-match losing streak at GIO Stadium against their neighbours from across the Ditch, which was only put to a stop in June last year when the Brumbies triumphed 24-12 over the Hurricanes.

The Chiefs and Brumbies had some of the standout performers in Round 1 last week, and they’ll both will be hoping their form continues into this week. The Brumbies’ Peter Samu will be gearing up to face a New Zealand franchise in an Australian team’s colours for the first time and he’ll be key in leading the Brumbies forward pack. Samu has turned in some big performances in the past against the Chiefs; in fact, he completed 12/12 tackles against them in February last year, the most tackles he has ever made in a Super Rugby match without a missed tackle.

Samu’s toughness in defence was on show last week, when he came on to replace David Pocock after just five minutes and performed admirably in his first hit-out with his new club. He completed 10/10 tackles, while he also made a round-high four clean breaks. With Pocock side-lined again this week, Samu’s experience could prove vital against the Chiefs. 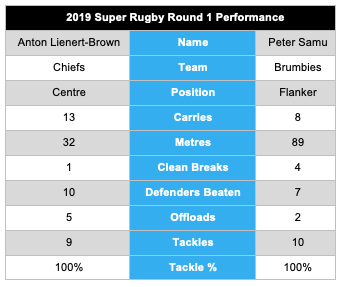 However, the Chiefs have their own star player in Anton Lienert-Brown, who at times looked to be unstoppable in a blistering Round 1 display. The flying centre beat 10 defenders and made five offloads, more than any other player in either category. Both Lienert-Brown and Samu are game-breakers who could be deciding factors in this clash.