The Pumas gave notice of their Super Rugby Unlocked potential with an impressive 27-21 win over the Griquas in Kimberley on Saturday.

After being well beaten by the Cheetahs in round one, Jimmy Stonehouse's men bounced back in fine fashion despite facing a second consecutive week on the road, outscoring their opponents by three tries to two to seal a hard-fought win.

The Griquas were quick to start the match on the front foot, and a clever little kick through from Andre Swarts forced Pumas winger Neil Maritz to carry the ball over the line. The resulting scrum on the Pumas five-metre line saw the Griquas earn a series of penalties, with George Whitehead finally deciding to go for the three points after the Pumas defence stood firm.

The hosts were soon back on the attack, and scrumhalf Zak Burger came close to scoring a peach of an individual try after making a clean break and kicking ahead for himself. While the bounce was favourable, the covering defence was able to intervene and hold the ball up just as looked as if Burger as going to score.

After spending much of the opening 20 minutes on the defensive, the opening try went to the Pumas following a brave decision to kick for touch rather than opt for an equalising three points. Earning another penalty at the lineout, Pumas No 9 Ginter Smuts caught the Griquas defence napping with a quick tap-and-go before wriggling his way over the line. Eddie Fouché's first kick at goal was successful as the visitors took a 7-3 lead.

The Griquas responded immediately from the restart by earning a penalty, allowing Whitehead to reduce the deficit to a single point thanks to an impressive kick from about 40 metres out on the angle.

The No 10 had another chance to put the Griquas back in front shortly after, as the Pumas' discipline let them down again, but this time his effort was just away to the left.

When Fouché was given the same opportunity on the half-hour mark after Griquas fullback Anthony Volmink got himself isolated and held on to the ball, he made no mistake to hand the Pumas a 10-6 lead.

The visitors had their tails up now and found another score after the ball was moved quickly to Etienne Taljaard out wide, allowing the winger to skin the last defender and cross for his side's second try. Fouché added the extras to give the visitors a surprise 17-6 lead.

But with time running out in the half, the Griquas earned a penalty right in front. They decided to go for the lineout rather than take the points on offer and it worked like a charm, with Victor Sekekete steamrolling over the line from the ensuing rolling maul. Whitehead couldn't convert from out wide, as it finished 17-11 to the Pumas at half-time.

The intense back-and-forth battle resumed after the break, with both teams guilty of letting themselves down with some scrappy play, but it was the Pumas who struck first when Fouché converted another penalty to put his side nine points ahead.

The Griquas needed a response and they found it on the hour mark, setting up an attacking lineout in the corner before rumbling over the line via their rolling maul and replacement lock Adre Smith. Whitehead added the extras and suddenly it was only a two-point game.

The Pumas weren't about to lie down, however, and with nine minutes to go, they struck a crucial blow while on the attack. Fouché spotted a gap and offloaded to Phumzile Maqondwana, who managed to get the ball away despite being ankle-tapped, freeing up speedster Devon Williams on the outside for the score. Fouché finished what he started to put the Pumas nine points clear again.

The Griquas went back on the attack and earned a penalty in a kickable position, opting for the three points to get back within one converted try.

Whitehead duly obliged to reduce the deficit to six, but the home side weren't able to fashion another try-scoring opportunity, as the Pumas manfully defended their line to seal the upset win. 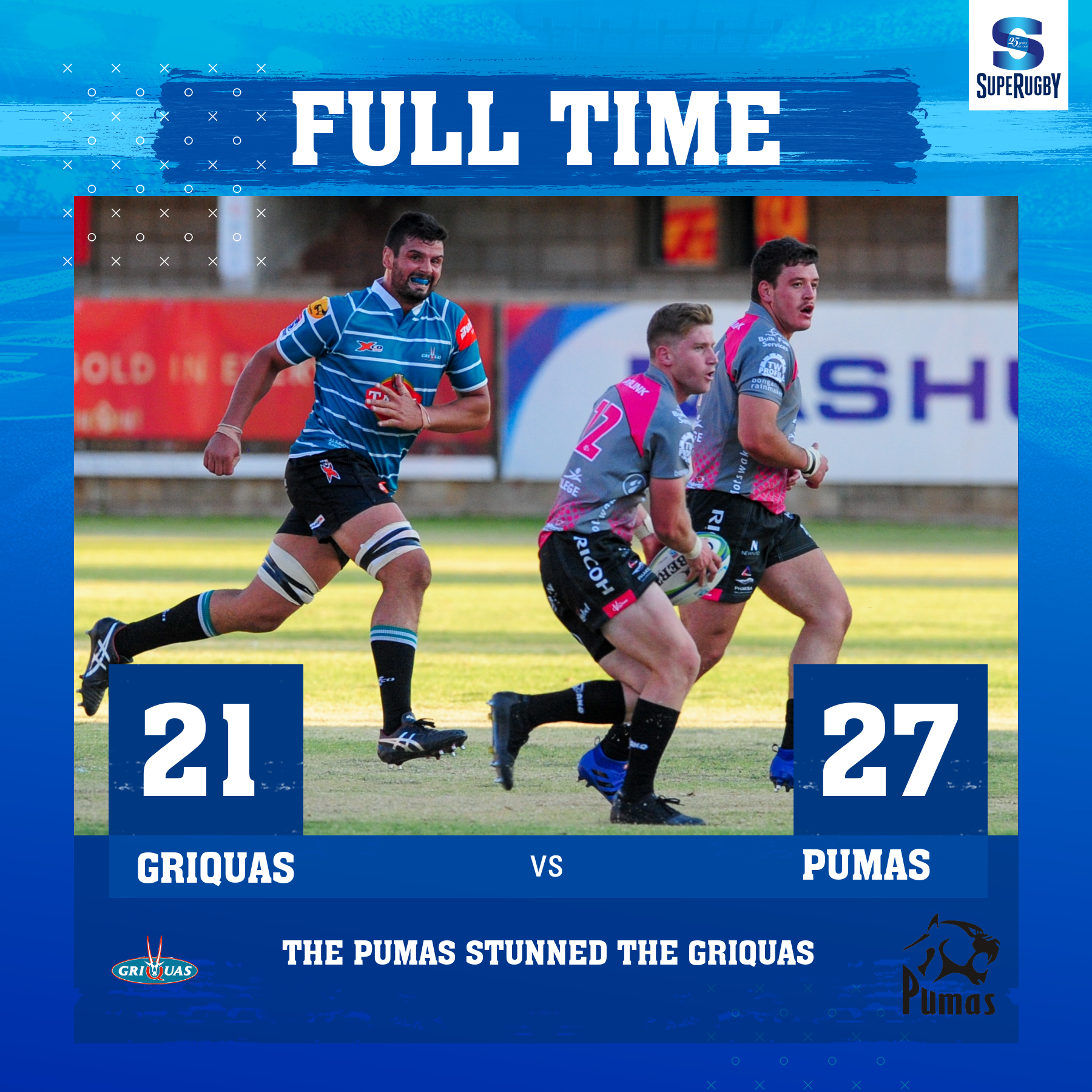