Race To The Finals - Australia

The Super Rugby season has hit the home stretch with teams and players returning from an exciting international break, and we’re going to take a look at what lies ahead in the road to the finals for the teams in the Australia conference.

The New South Wales club has one hand on automatic entry in the post season with just a few rounds remaining, holding a one-point lead on the chasing Melbourne Rebels. They turned on the afterburners in the weeks leading up the international break, posting high-scoring wins over by the Highlanders and Reds, while their defeat to the Chiefs saw the Tahs put 27 points past them.

The Waratahs will play their remaining three games in Australia, hosting the Sunwolves and Brumbies to close out the regular season after a visit to Melbourne this weekend. That should come as some comfort for the club, who have won their last eight games on the bounce against teams currently in their conference.

Israel Folau may not have found the whitewash in his three-match stint against Ireland in the international window, but he’s been in scintillating form in the sky-blue jersey. Folau has crossed for five tries in his last four games in Super Rugby, as well as laying on two try assists in that time.

The Melbourne club have continued to use their explosive start to the season as the catalyst behind an exciting finals berth, and will have their fate squarely in their own hands when they host the Waratahs this weekend. A win over the New South Wales side will be crucial for the Rebels given that they face a tougher run home in the final fortnight of the regular season.

The Rebels will first host the Reds before travelling to Dunedin to finish their regular season against the Highlanders. The Rebels have won just two games in New Zealand in their Super Rugby history, and while one of those wins came in their most recent such fixture, they have generally been thoroughly outscored in recent times.

The team from the nation’s capital are still in with a real chance of playing in the post-season if they can get their act together in the final few rounds of the regular season. Sitting just nine points behind the Melbourne Rebels, the Brumbies have a tough road ahead with their run home including games against the Hurricanes at home and a visit to the Chiefs before rounding out their regular season with what could potentially be a deciding game against the Waratahs in Round 19.

Only once in the last decade have the Brumbies lost more than one of their final three regular season games for a campaign, and while that one instance may have come in 2017 the Brumbies have certainly proven themselves as stronger finishers.

The Brumbies have been at their strongest in the 20 minutes immediately after half-time this season. In fact, they’ve been the best of any team defensively in that period.

The Canberra club have conceded just six tries and 46 points between the 41st and 60th minutes this season, fewer than any other clubs in the competition.

Although they have the slimmest mathematical chance of a finals berth, the Reds main focus will be ending the season on a high. They travel to Auckland to face the Blues this weekend in what will likely be the toughest of their remaining fixtures, given that they haven’t won in New Zealand since 2013, but if they can escape with points they’ll have the confidence to triumph in their remaining fixtures against the Rebels and Sunwolves. What’s more, they’ll finish their regular season with back-to-back games at home, and they’ve won five of their seven previous games at home against the Rebels and Sunwolves combined. 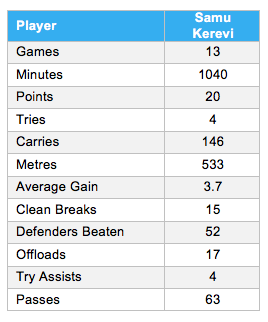 Samu Kerevi has been one of the most devastating attacking weapons in recent seasons of Super Rugby let alone among only his Reds’ squad. The Australian international has made 146 carries and beaten 52 defenders already this campaign, to be ranked third amongst the entire competition in both categories this season.

Kerevi has been directly involved in four tries in his last four appearances for Queensland, crossing once and setting up three with assists in that time.

The Japanese side might be on the bottom of the conference ladder, but the 2018 campaign has been one which has shown plenty of promise and improvement for the young Super Rugby club.

The Sunwolves are just three competition points shy of their best ever season in the competition, with their previous best tally of 12 being set last season. The 2018 campaign has also seen a significant improvement in point scoring from the squad as well, with the Sunwolves averaging three points per game more than they did last campaign.

The Sunwolves host the Bulls this weekend as they search for an impressive third consecutive win on home soil before finishing their season with a brace of games in Australia against the Waratahs and Reds. The Japanese outfit have scored an average of 30 points per game against Australian opposition so far this season, more than they’ve managed against teams from either New Zealand (12) or South Africa (29), and will thus fancy their chances at spoiling a few late season parties for their opposition.