The Blues made it three wins from three as they cruised to a 38-10 victory over the Brumbies in a one-sided Super Rugby Trans-Tasman clash at Eden Park in Auckland.

The hosts went into the break with a seven-point advantage after a strong showing by the Brumbies in the first half but it all fell to pieces for the visitors in the second half as the Blues scored three unanswered tries to claim what would turn out to be a comfortable win.

The in-form Blues started brightly and were awarded a penalty after just three minutes of play, only for Zarn Sullivan to send his 50-metre attempt off the tee just wide of the mark.

The Brumbies were a big threat at the lineouts and they would eventually get a 5m throw after earning a penalty in the 12th minute. However, the chance went to waste as Tom Banks dropped the ball in midfield, under pressure from his opposite number, Sullivan.

However, it was the Blues who opened the scoring on 17 minutes, hooker Kurt Eklund bagging a try after peeling off the maul and powering his way over the line, Otere Black adding the extras.

The try sparked an immediate reaction from the Brumbies and they came agonisingly close after another well-worked lineout inside the Blues 22 as Rob Valetini lost the ball at the line. The Brumbies did manage to win a penalty a couple of minutes later, though, with Noah Lolesio slotting over the make it 7-3.

And the sustained pressure would finally take its toll on the Blues defence as the visitors went on to claim the lead on 35 minutes, Connal McInerney rounding off a great maul as he powered over the line, Lolesio adding the extras to give the Brumbies a three-point lead.

But the Blues were quick to post a response, drawing level a few minutes later as Black slotted a penalty before claiming the lead on the stroke of half-time. Rieko Ioane sparked the move with a brilliant break before offloading for halfback Finlay Christie, who skipped past five defenders to go over the chalk. Black slotted the easy conversion right in front, giving the Blues a seven-point advantage heading into the break.

It didn't take long for the Blues to add to their advantage after the restart, Bryce Heem continuing his fine run of form as he burst over the line after a quick tap on from Black, who added the extras to give the Blues a 14-point lead.

The Blues continued to pile on the pressure and stretched further ahead on the hour mark as AJ Lam made a surging run out wide to plant down after some patient build-up from the hosts' forwards close to the line.

Black added the extras, leaving the Brumbies with a mountain to claim with 20 minutes left on the clock.

The home side showed no mercy in the closing stages of the contest as, after seeing substitute Folau Fainga'a pick up a yellow card for collapsing a maul, TJ Faiane added his name to the scoresheet in the 72nd minute. After a quick interchange between substitutes Jonathan Ruru and Harry Plummer, the ball made its way to Faiane, who stepped his way over for the Blues' fifth. Plummer added the extras with his first conversion of the evening.

Despite the Blues threatening to run away with it in the final minutes, the Brumbies managed to recover their composure and hold firm, albeit with the help of a Blues error on the opposition goal-line. 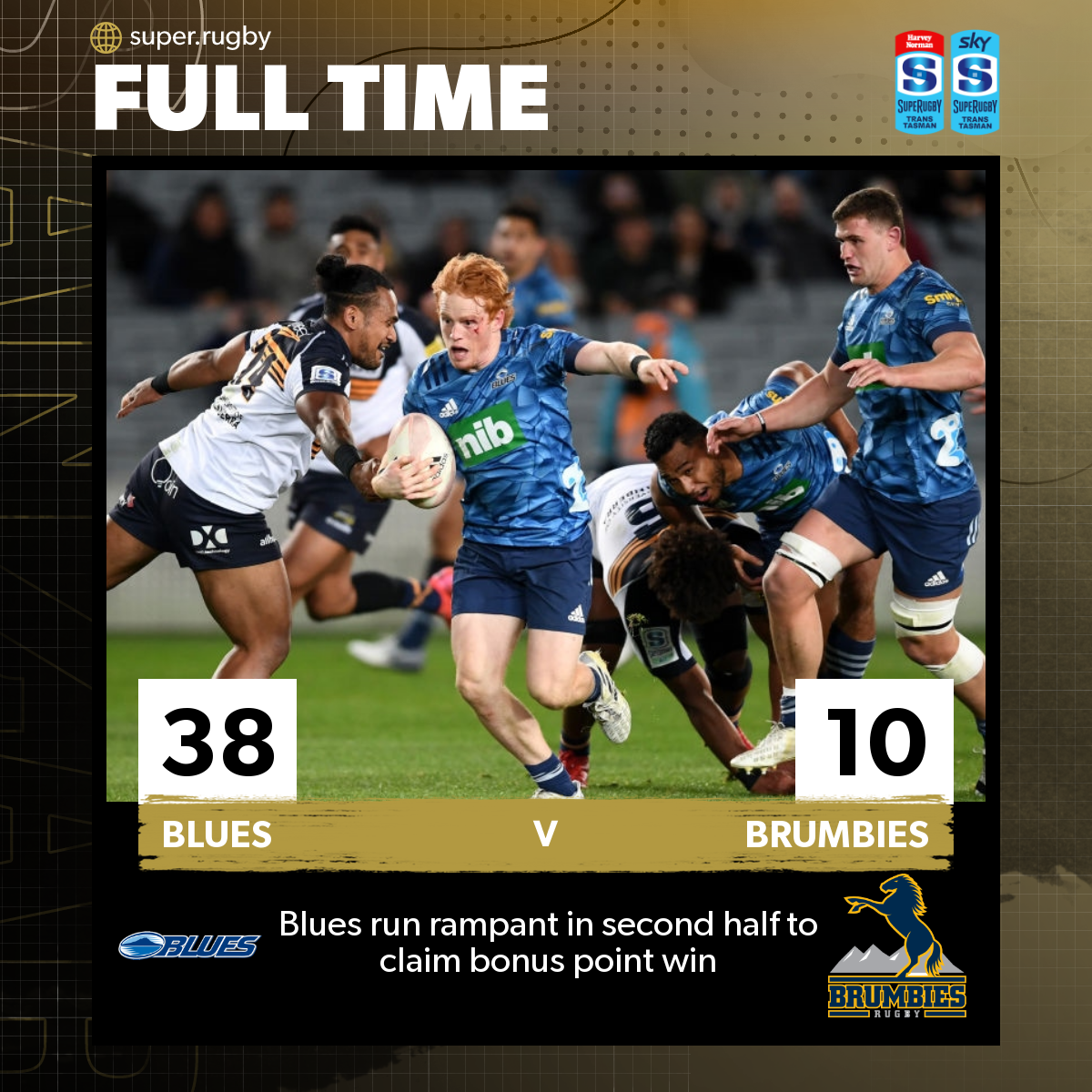