Rapid Reds down Rebels at the death

The Reds delivered a high-tempo performance to eventually earn a 23-21 victory over the Rebels in their Super Rugby AU clash in Brisbane on Friday.

Ill-discipline at ruck-time cost the home side early, as Matt Toomua slotted two penalty goals in the opening eight minutes. The high-paced affair continued and the Reds earned the first real chance to get over the line, but the Rebels scrum earned a penalty under their own poles to relieve the pressure.

Reds winger Jordan Petaia enjoyed a few dangerous runs, one that almost resulted in a try, but the Rebels' Tom Pincus snaffled an intercept 10m out from his own line.

Midway through the opening half, James O'Connor and To'omua swapped penalties to take the scoreline to 9-3.

The frenetic pace of play continued from the Reds but they were unable to turn the pace and pressure into many points thanks to handling errors and stoic defence from the Rebels. In contrast, almost every time the Rebels visited the Reds 22m, they would come away with points. To’omua popped over another easy three-pointer after an offside call.

But the Reds had the last laugh of the half, with O’Connor taking the scoreline to 12-6 as the players jogged down the tunnel.

After a fifth To'omua penalty kick, the Reds would finally get the ball over the whitewash. O’Connor set up a lineout 10m out from the Rebels’ line and the hosts executed a perfect driving maul, with the backs piling in behind the forwards to eventually get hooker Alex Mafi over the line. O'Connor added the extras to make it a two-point ballgame.

Reece Hodge then extended the Rebels' advantage to five points with an absolute bomb of penalty from around 55m on the angle, despite heckles from the crowd.

Riding high off the success of the first driving maul, the Reds would attempt the same gameplan but twice the Rebels defence would hold firm. To make matters worse, replacement prop Feao Fotuaika would be shown a straight red card for a dangerous cleanout at the ruck, earning him 20 minutes on the sidelines under the new rules.

Despite this, the Reds earned a penalty after an enormous scrum with just seven men. O’Connor would kick the penalty to make it 18-16. 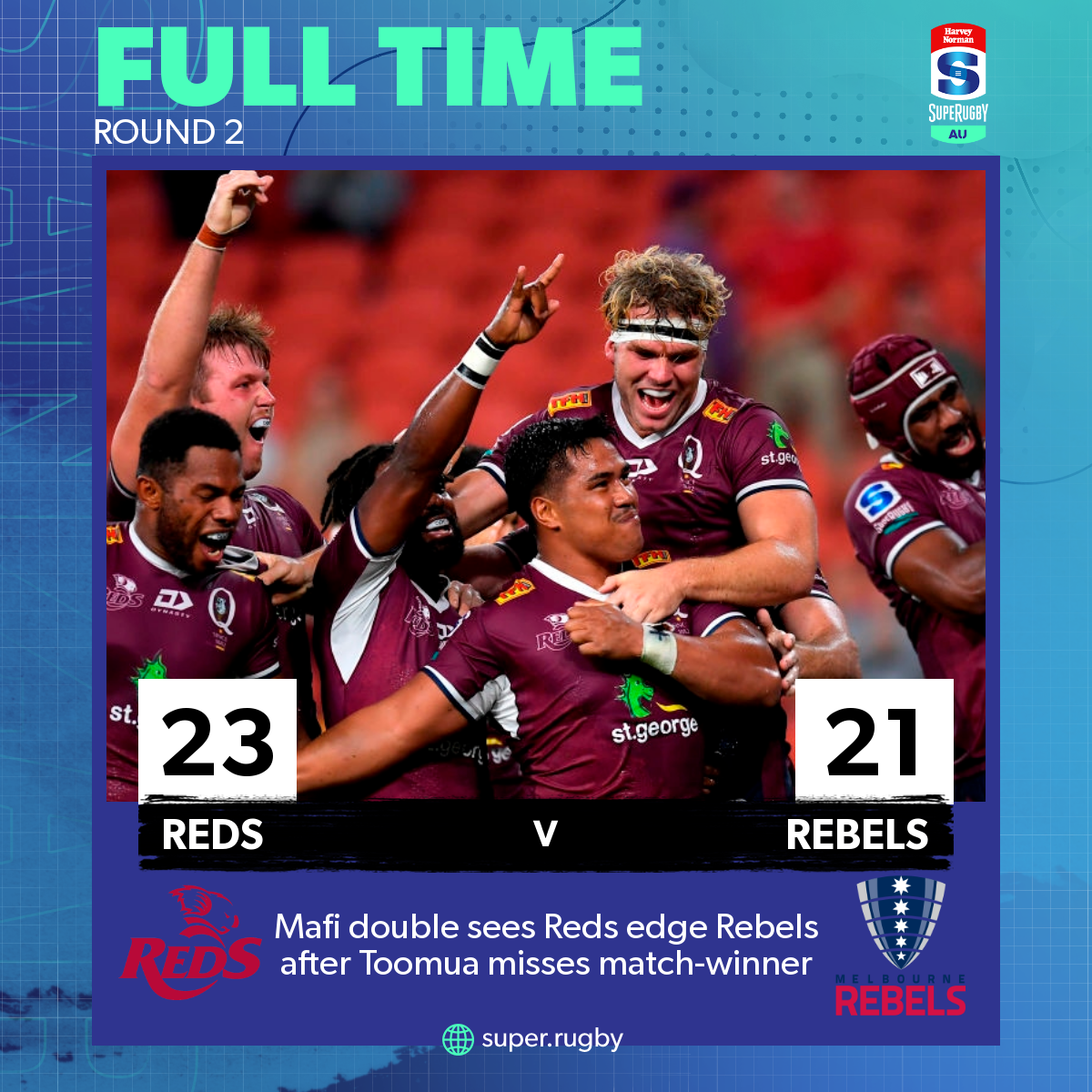 But yet again the Reds' discipline would let them down, giving To'omua another shot at goal. The Wallaby obliged to take the lead back to five points with ten minutes to play.

Some O'Connor magic late in the game saw the flyhalf chip over the top and Hunter Paisami gathered, who then put Mafi away down the touchline. But Hodge would execute a try-saving tackle that ended with Mafi knocking-on the ball just a metre before the try line.

However, the bollocking hooker would get another bite at the cherry. The Reds would fake a driving maul from a lineout and Mafi came flying round the outside to smash his way over the whitewash to tie up the ballgame. The mercurial O'Connor chipped over for Reds to take the lead for the first time in the match with two minutes left on the clock.

But the crowd at Suncorp Stadium was forced to hold their collective breath when another high tackle gave To'moua a chance to win the game for the Rebels. His shot from 42m out would just slide past the uprights, cueing rapturous applause from the bleachers as To'omua looked at his bootlaces.