Rebels Back To Winning Ways Against Sunwolves

The Rebels proved too strong for the Sunwolves in their Super Rugby encounter as they secured a convincing 40-13 victory in Melbourne on Friday.

In a fast-paced and entertaining game, the home side were full value for their win as they outscored the Sunwolves six tries to one with Marika Koroibete leading the way with a deserved hat-trick.

The result means the Rebels consolidate second place on the Australian Conference standings - behind the Waratahs - while the Sunwolves still occupy the bottom spot on that table.

The Sunwolves made a terrific start and took the lead in the third minute when, from an attack close to the Rebels' 22, Jason Emery joined the line at pace before offloading to Lomano Lemeki, who crossed for the opening try.

Hayden Parker added the extras but it did not take long for the Rebels to respond and two minutes later Koroibete gathered a pass from Billy Meakes before racing away to score their opening try under the posts.

Reece Hodge converted, which meant the sides were level at 7-7, but the Rebels controlled proceedings for the next 15 minutes and were rewarded with two further tries.

First, Michael Ruru did well to get a pass out to Jack Maddocks, on the edge of the Sunwolves' 22, in the 17th minute and the wing did well to step out of a tackle on his way over the whitewash.

And five minutes later, Amanaki Mafi showed great determination to burst through two tackles from close quarters before dotting down.

Hodge also converted both those tries but the visitors did not take that lying down and narrowed the gap courtesy of two penalties during the half's latter stages, which meant the Rebels held a 21-13 lead at half-time.

The second-half started more precariously but the home side extended their lead by the 48th minute when Maddocks crossed for his second try after the ball went through several pairs of hands in the build-up.

Things then went pear-shaped for the Sunwolves when Hosea Saumaki was sent to the sin-bin for a cynical defensive foul close to his try-line in the 62nd minute.

The Rebels made full use of their numerical advantage as they notched two tries during his spell off the field and both were scored by Koroibete.

The flyer was rewarded with his second five-pointer in the 67th minute when he cantered in after gathering a long pass from Dane Haylett-Petty and three minutes later he shrugged off a defender before stepping out of a tackle to secure his first Super Rugby hat-trick and the result for the home side. 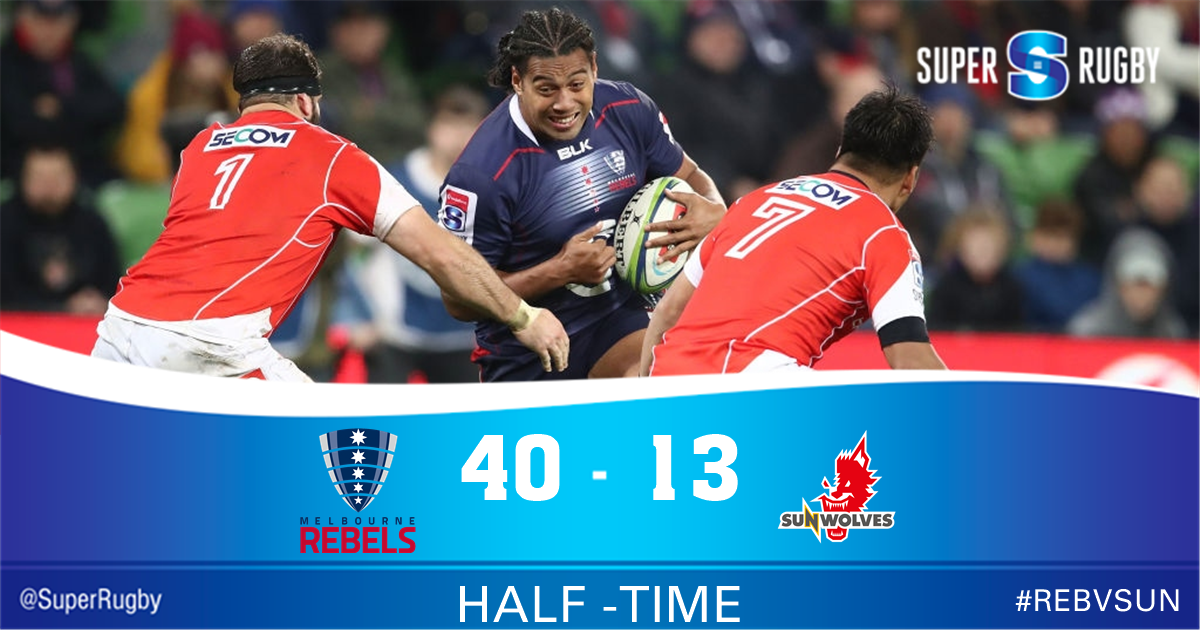