Rebels back to winning ways over struggling Sunwolves

The Rebels easily had the better of the Sunwolves in their Super Rugby clash in Tokyo running out emphatic 52-7 winners.

The Japanese outfit once again struggled to impose themselves, making too many unforced errors as they found themselves outscored by eight tries to one.

After a quiet start to the match, the visitors from Australia finally opened their account in the 14th minute and never looked back.

It was quick thinking from scrumhalf Will Genia that created the opening score, as he flung a pass out wide before the ball was moved through the hands for Angus Cottrell to dive over.

Quade Cooper added the extras, and the Sunwolves barely had time to collect themselves before the Rebels scored their second try a minute later.

Reece Hodge was the man who started the move after finding a big gap in the Sunwolves defence. He was brought down after a long run, but the ball was recycled quickly, allowing Marika Koroibete to cross the whitewash before Cooper kicked the conversion to make it 14-0.

The Rebels suffered a setback in the 22nd minute when Matt Philip was sin-binned for a cynical foul, but they were able to hold out with 14 men, and in the 29th minute Koroibete picked up his second try of the match as the Sunwolves were caught out wide again following another long pass from a quick-thinking Cooper.

The hosts continued to struggle after the half-time break, and the Rebels crossed for their fourth try in the 54th minute, this time thanks to some superb defence. After denying the home side in their own half, Jack Maddocks picked up the ball and ran all the way to the tryline.

It took less than five minutes for the Rebels' fifth try to arrive courtesy of Dane Haylett-Petty, although the fullback was merely in the right place at the right time to dot down after Koroibete's 40-metre run.

The Rebels were now leading 31-0, but the Sunwolves were finally able to get on the board in the 63rd minute with their first - and only - try of the match. It was a charge down by Jason Emery that did the trick, as the New Zealander collected the loose ball and ran to the line to touch down.

The visitors were soon back on the attack, however, and picked up their sixth try through substitute Michael Ruru in the 73rd minute. After earning a five-metre scrum when the Sunwolves were forced to carry it over their own tryline, Ruru picked up the ball from the ensuing setpiece and crashed over.

Some more good work from Ruru led to the Rebels' seventh five-pointer, as he freed up Maddocks for the score in the 75th minute.

And their was time for an eighth try as well, substitute Jordan Uelese getting in on the act following a driving maul, before Cooper kicked the conversion to make it 52-7 as the final whistle sounded to bring the Sunwolves some relief. 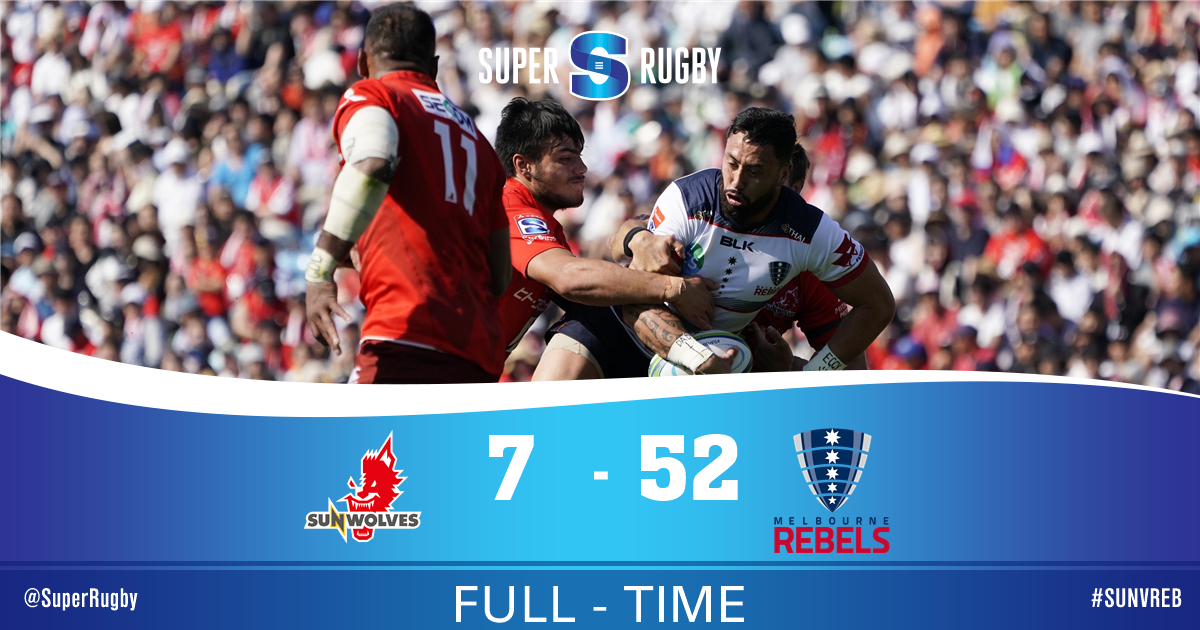