The Rebels strengthened their Super Rugby play-off hopes when they claimed a deserved 20-10 win over the Blues in Auckland. It was only their second ever win in New Zealand.

In a topsy-turvy match, in which the lead changed hands several times, the Rebels made less unforced errors and eventually outscored their hosts three tries to one with Billy Meakes leading the way with a brace.

The Blues had the better of the opening exchanges and opened the scoring in the sixth minute courtesy of a Stephen Perofeta penalty after Michael Ruru was blown up for obstruction.

The Rebels soaked up the early pressure and struck back in the 12th minute when Meakes cantered in for the opening try after running onto a well-timed pass from Ruru close to the Blues' tryline.

Reece Hodge added the extras which gave his side a 7-3 lead and that try gave the visitors plenty of confidence as they were the dominant side for the next 20 minutes.

In the 24th minute, the visitors thought they had increased the lead when Ruru went over from close quarters but his effort was disallowed when television replays revealed that Augustine Pulu held him up on his way over the tryline.

The Rebels put that setback behind them and continued to attack and five minutes later Colby Fainga’a dotted down but after checking with his TMO, referee Nick Briant disallowed the try as Fainga’a played the ball from an offside position after a knock on from Marika Koroibete in the build-up.

The Blues needed a response and that came in the 35th minute when Terrence Hepetema sold Koroibete a dummy on the edge of the Rebels' 22 before crossing for his side's only try which Perofeta converted.

That gave the Blues a 10-7 lead but the Rebels would finish the half stronger and on the stroke of half-time Fainga'a got a pass out to Dane Haylett-Petty, who rounded a defender before dotting down to give his side a narrow two-point lead at the interval.

The Rebels continued to dominate after the restart and were rewarded three minutes into the new half when Meakes crossed for his second try. This, after Dane Haylett-Petty caught the Blues by surprise with a perfectly-weighted chip kick which Koroibete gathered before offloading to the on-rushing Meakes.

The Blues upped the ante on attack, in a bid to narrow the gap, and shortly afterwards Matt Moulds crossed the whitewash from the back of a lineout drive, but his effort was disallowed when the TMO ruled that it was inconclusive whether the hooker grounded the ball under a mass of bodies.

And three minutes later, the home side came close to scoring again but Matt Duffie lost the ball while crossing the try-line.

Those missed opportunites proved costly as Hodge gave his side a 10-point buffer when he slotted a penalty from 48 metres out on the hour-mark.

The Blues launched several attacks and nearly scored their second try in the 69th minute when Perofeta was in the clear inside the Rebels' 22 but a crucial akle tap from Hodge halted his progress.

The Rebels finished stronger though and Koroibete came close to scoring his side's fourth try in the 77th minute but he had a foot in touch before dotting down.

But despite that disallowed effort, the men from Melbourne held on for only their second-ever win on New Zealand soil. 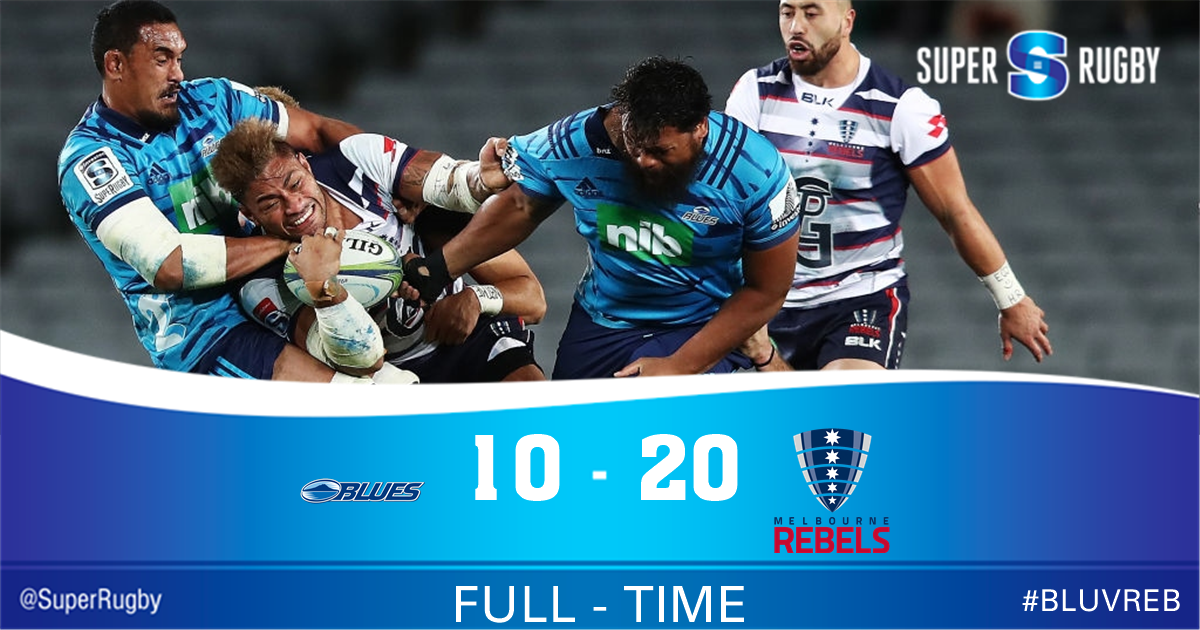