Rebels get back to winning ways

The Rebels ended a three-game losing streak in Super Rugby on Sunday as they beat the Force 27-22 in an Australian derby at AAMI Park.

Scores from Reece Hodge, Sefa Naivalu (2) and Lopeti Timani saw them to the four points that is a perfect tonic going into the June break.

The Force crossed three times, through Luke Morahan (2) and Harry Scoble, as they remain rooted to the foot of the Australian conference.

Michael Foley's men have won just twice this season and are on 12 points, with the Kings and Sunwolves the only teams below them on nine.

The Rebels began strongly and crossed after 12 minutes when a lovely dummy and break from Mike Harris led to him feeding Hodge who scored. However that try would be marred by an injury for Wallaby call-up Harris, who is now unlikely to play in the upcoming June internationals.

Seven points down the Force took little time in bouncing back and were over four minutes later through Morahan, the wing showing his class down the left sideline with a grubber and regather en route to scoring. That came a minute after a Peter Grant penalty so it was now 7-8.

There weren't many scoring opportunities for either side in the second quarter of the game as only a Hodge penalty was carded, meaning the Rebels went into the dressing room 10-8 in front. Remember they were looking to end a disappointing spell of results going into the break.

After the interval it was all action though as it took just two minutes for Naivalu to extend the Rebels' lead, crossing wide on the right.

That meant it was 15-8 to the Rebels but the score was locked up on 47 minutes when Force hooker Scoble scrambled over from ten metres out.

The tries continued to come in Melbourne and the fans were pleased the next arrived from a player in red, white and blue as Timani smartly rolled over from the base of a ruck to push his side back in front. Unfortunately for the Rebels, Jack Debreczeni's conversion hit the post.

Debreczeni would have no such trouble on 65 minutes when Nic Stirzaker crabbed across the field to allow Naivalu to hit a superb line that took him over. At 27-15 up, the Rebels were now looking good for a victory that would move them seven points off the Brumbies and Waratahs.

And despite a late Force try from Morahan, the hosts would hold on as they go into the break with a morale-boosting victory on home soil. 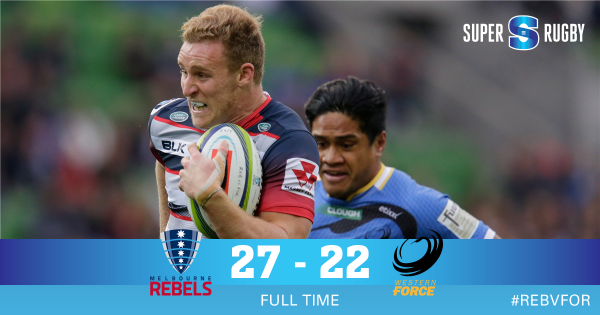