Rebels get the better of Reds in Australian derby

The Melbourne Rebels claimed a 30-24 victory over the Queensland Reds in an Australian derby at AAMI Park on Friday.

The Reds took a 3-0 lead in the fifth minute when Rebels fly-half Quade Cooper was penalised for offside and opposite number Bryce Hegarty made no mistake from the tee.

The Rebels were dominating the early possession and territory and enjoyed three lineouts five metres out from the Reds' tryline in succession but failed to capitalise.

The visitors were dealt a blow in the 15th minute when captain Samu Kerevi was given a yellow card for tackling Rebels scrum-half Will Genia in the air.

From the resulting penalty, they kicked for the corner, set up the rolling maul and swung the ball out to the right to Marika Koroibete, who punctured the defensive line to cross the chalk.

The Reds were punching back and won a penalty straight in front after Rebels centre Billy Meakes breached the offside line. Hegarty cut the deficit to one from the tee.

The hosts extended their lead on the half-hour mark. After winning a succession of penalties deep in opposition territory, they capitalised on the second attempt as Anaru Rangi bustled himself over at the back of a well-worked driving maul on the right-hand side. Cooper added the extras for a 14-6 lead.

Soon after, the visitors hit back. Isaac Lucas went on a sniping run down the right-hand side, passed to prop Taniela Tupou, who showed good hands to return the favour, passing back to the scrum-half, who had a free run to the line.

On the stroke of half-time, Scott Higginbotham was sin-binned for collapsing the maul as the Reds went down to ten men. But the Reds once again failed to capitalise as they butchered yet another lineout, something they had been guilty of all match.

Dave Wessels' men extended their lead five minutes after the interval. A good set-piece move from the scrum put Reece Hodge through the gap who ran to the corner was brought down five metres out by Jock Campbell. The ball was recycled by Genia to prop Tetera Faulkner, who bashed his way over the line, doing well to stay in the field of play.

Brad Thorn's men looked to be falling apart with the numerical disadvantage. Hodge got free on the overlap down the right-hand side and passed back inside for Dane Haylett-Petty who ran in for the bonus-point try.

However, the visitors hit back. Rangi was penalised for a late hit on Hegarty and the Reds kicked for the corner before setting up the rolling maul with Harry Hoopert going over at the back. Hegarty converted for a 24-18 lead with 20 minutes to go.

Soon after, the Melbourne-based side extended their lead to nine points with a Hodge penalty. Hegarty reduced the arrears to six after Matt Philip was penalised for offside.

With three minutes to go, Hodge put the result beyond doubt with another penalty after Richard Hardwick did good work to win the turnover at the breakdown. Hegarty landed a penalty after the hooter but it mattered little as it was the Rebels who came away with the points. 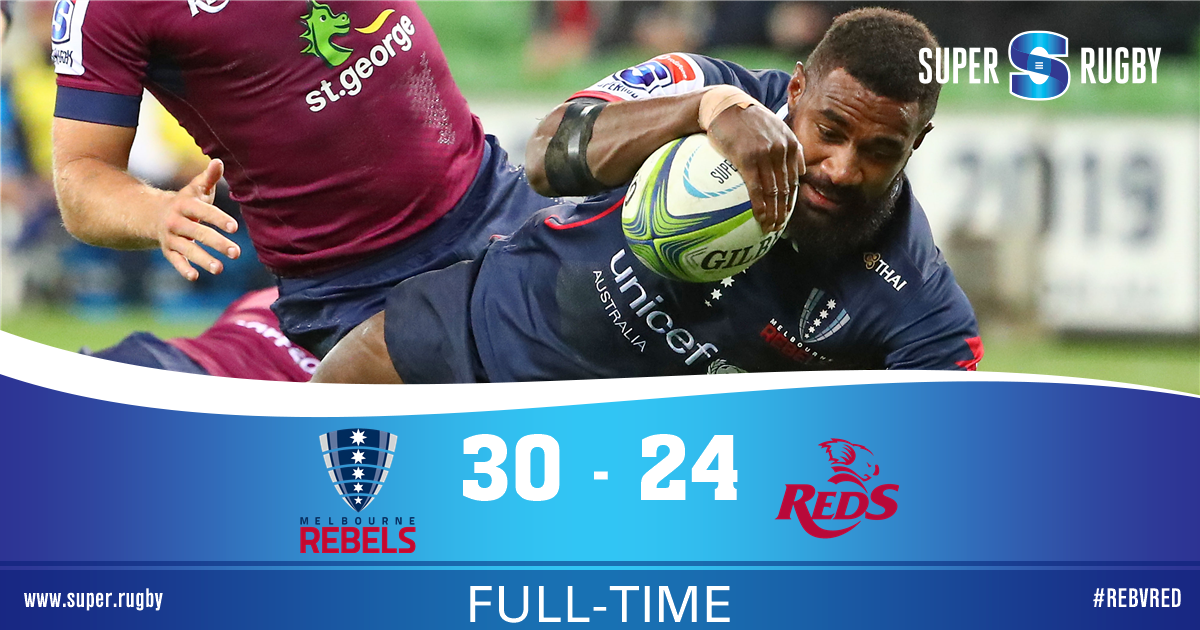