The Rebels made it four from four in the 2019 Super Rugby campaign following a brilliant comeback 29-26 win over the Brumbies at AAMI Park in Melbourne on Friday.

After relentless pressure and a couple missed chances, a moment of brilliance would see Henry Speight dot down for the Brumbies in acrobatic style in the 18th minute. The flying winger looked to have been bundled out by the cover defence but the video replay revealed he was millimetres in.

Playing the territory game all too well, the Rebels remained pegged deep in their half. After a number of penalties, Adam Coleman was shown a yellowcard. Brumbies captain Lealiifano kicked to the corner with an air of inevitability. Sure enough, hooker Folau Fainga'a would fall over the line after a powerful lineout drive.

As the half-time hooter sounded, the Brumbies again piled on the pressure with a dominant forward pack. Almost over the line, Rebels prop Matt Gibbon somehow emerged with the ball, complete with sheepish grin. But referee AJ Jacobs was a wiser man, awarded a penalty try and gave Gibbon his marching orders with a yellow card.

The visitors went down the tunnel 19-3 up at the half.

But despite starting the second stanza with two men in the bin, the Rebels brought the home crowd to life with a score in the corner via Marika Koroibete. The winger received a no-look Hail Mary from playmaker Quade Cooper, bounced off one tackler and crashed over the line for fine try.

The Rebels then fought their way back into the game with a score in the corner from Jacks Maddocks. After a strong forward drive and quick ball, Will Genia sent a bullet-pass out wide for the winger who went over untouched. A successful conversion made it 15-19 with 30 minutes to play.

The Brumbies hit back quickly, as flanker Rob Valetini would eventually cross the whitewash after a huge scrum in the middle of the field, extending their lead to 11 points, seemingly in the driver's seat of the contest.

But the Rebels had other ideas.

With Genia marshalling the troops, the Wallaby livewire tapped a quick penalty and caught the Brumbies defence napping to sneak over the line.

Just five minutes later, with the Rebels faithful fully behind their charges, some enterprising play saw Cooper float another miracle ball to Maddocks for a near-carbon copy of their first try. With Cooper’s successful conversion, the home side found themselves 29-26 up with eight minutes left on the clock.

The Rebels ground out the victory, leaving a dejected looking Brumbies to wallow in the myre. 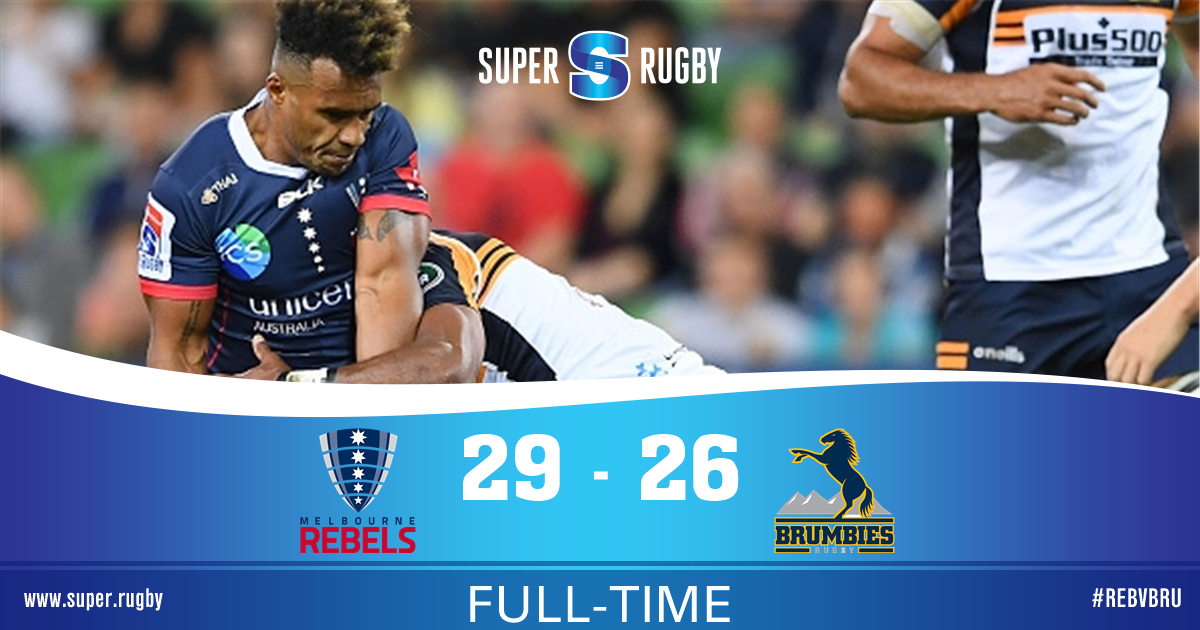