The Rebels were too good for the Waratahs in Sydney on Friday, as they claimed their first win of the Super Rugby AU campaign courtesy of a 29-10 triumph.

The Melbourne-based side were full value for their win, dominating the match for long periods and eventually outscoring the hosts two tries to one.

Matt Toomua led the way for the Rebels with a 19-point contribution courtesy of five penalties and two conversions, while their other points came via tries from Ryan Louwrens and Marika Koroibete.

For the Waratahs, Alex Newsome crossed the whitewash and Will Harrison added a penalty and a conversion.

The Rebels were fastest out of the blocks and thought they had opened the scoring in the third minute when Andrew Kellaway crossed the whitewash. He knocked the ball on, however, but the Waratahs had infringed on defence and Toomua slotted the resulting penalty to give his side an early lead.

Shortly afterwards, the Waratahs took the lead when Newsome gathered a stray pass from Reece Hodge inside the Rebels’ 22 and had an easy run-in for the opening try.

Despite that setback, the visitors controlled proceedings, enjoying the bulk of the possession and territory as the Waratahs committed several defensive fouls, especially in their own half.

Toomua added two further penalties which handed the Rebels a 9-7 lead before the home side struck back with a three-pointer of their own from Harrison in the 23rd minute.

That would turn out to be the last points the Waratahs scored as they faded badly as the match progressed.

On the half-hour mark, they were reduced to 14 men when Michael Hooper was yellow-carded for a professional foul and, once again, Toomua was on target from the kicking tee to put his side back in front.

It was all Rebels during the rest of the half and they were rewarded in the 38th minute when Louwrens went over for their first try from close quarters after a dominant scrum from the visitors in the build-up.

Toomua added the extras which meant the Rebels had their tails up with the score 19-10 in their favour at half-time.

The second half was a scrappy affair with both sides guilty of committing numerous unforced errors. The Rebels were still the dominant side, though, and came close to scoring their second try in the 65th minute when Toomua had a crack at the Waratahs’ tryline after an excellent line break, before being held up by the cover defence.

Soon after, Andrew Deegan had a chance to extend the Rebels’ lead when he lined up a shot at goal after another defensive indiscretion from the Waratahs, but his effort was off target.

In the 71st minute, Toomua succeeded with his fifth penalty after Holloway was blown up for straying offside on defence and was also sent to the sin bin for the foul.

Just before full-time, Koroibete sealed his side’s victory when he gathered a ball at a ruck close to the Waratahs’ 22 before beating three defenders on his way over the tryline. 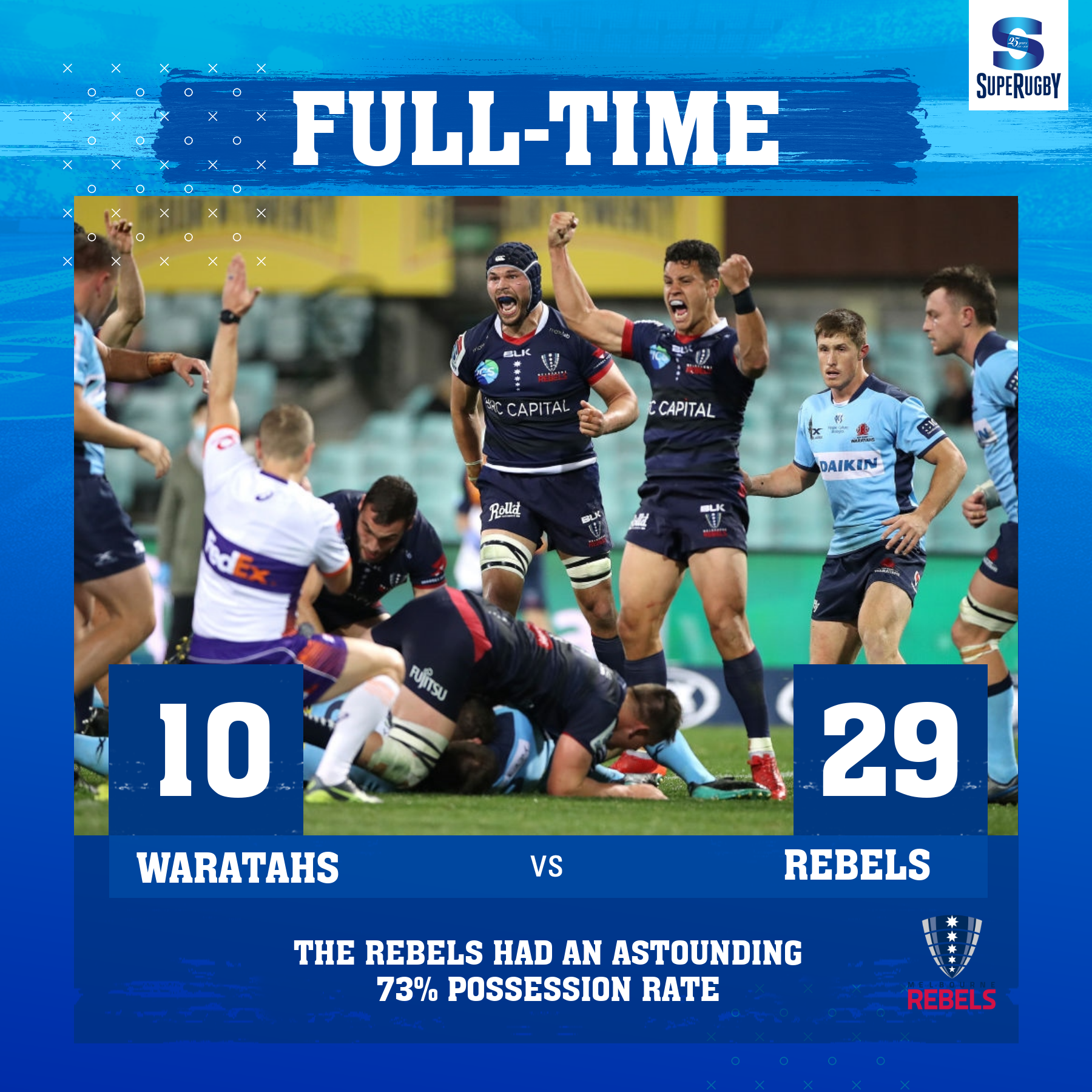