Rebels power past the Lions in Melbourne

A strong second half showing overcame some disciplinary issues and allowed the Melbourne Rebels to secure an emphatic 37-10 win over the Lions at AAMI Park in Super Rugby on Saturday.

The South African outfit have had a very poor start to the 2020 season, their only win so far coming in round 2 against the Reds and the gulf in class between the two sides was evident from early on.

Matt Toomua got the hosts on the board with a 13th minute penalty following a sustained period of pressure and that was quickly followed up just six minutes later by the game's first try.

The visitors were seemingly on the front foot but an overthrown lineout handed possession back to the Rebels, who launched an immediate counter-attack. The hosts shifted it out wide for Andrew Kellaway and he stepped past his marker and into space to accelerate away for the score. The conversion was unsuccessful but an 8-0 lead had been established.

It seemed like their momentum would be halted in the 27th minute when Marika Koroibete was sent to the sin bin for a dangerous high tackle.

However, just two minutes later they crossed the whitewash yet again. The Lions gave away a free kick on halfway after a scrum infringement and the Rebels attacked immediately. Despite their numerical disadvantage, Kellaway was able to bust through another gap before feeding an inside ball to Richard Hardwick to score. This time Toomua was successful with the conversion and the hosts moved to an imposing 15-0 lead.

The visitors fought their way back into the game in the dying moments of the first half though, with Jamba Ulengo going over for their first try of the match in the 34th minute. It was converted by Elton Jantjies and the flyhalf added a penalty on the stroke of halftime to bring the score to a more respectable 15-7 at the break.

Things began to look even more promising for the South African outfit when Tom English received the home sides second yellow card of the day, this one was for some cynical play at the breakdown.

Unfortunately for the visitors, the Rebels were equally unperturbed by being a man down the second time around and quickly scored another try just three minutes into the second half.

They set up a strong attacking platform with a driving maul from a lineout 22 meters out from the try line. Ryan Louwrens broke away to offload to Bill Meakes and it went through the hands to Isi Naisarani to go over for a beautiful score. It was converted successfully by Toomua.

Dane Haylett-Petty extended their lead further with the Rebels fourth try of the game in the 54th minute, again converted, to push the score to 29-7 by the hour mark.

The scoring calmed down dramatically at this point as a flurry of substitutions broke up the flow of the game.

However, the Lions did grab a consolation try in the 73rd minute through Sti Sithole, converted by Jantjies. But, not to be outdone, the Rebels had the final say with Kellaway going over for his second try of the game in the 78th minute to add an exclamation point on to an excellent performance from the Australian outfit, which finished 37-17. 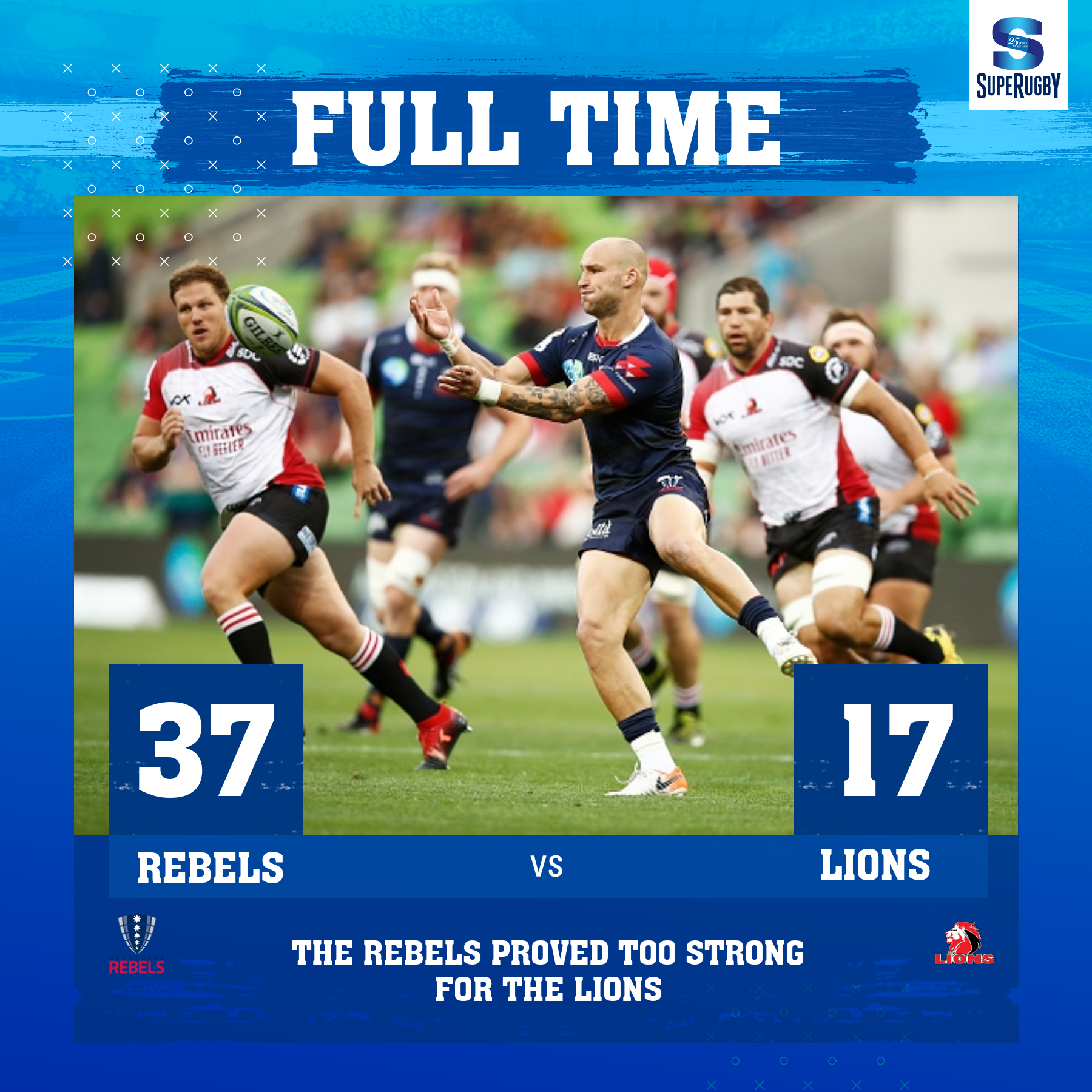