The Crusaders consolidated their position at the top of the Super Rugby table courtesy of an emphatic 66-0 win over the Rebels.

The champions were full value for their win as they dominated most facets of play and the Rebels battle to read various attacking variations from their opponents, who ran in 10 tries.

Sevu Reece and Braydon Ennor led the way with a hat-trick of tries each while the other five-pointers were scored by David Havili (2), Bryn Hall and Ryan Crotty. Richie Mo’unga added seven conversions and Crotty also succeeded with a two-pointer off the kicking tee.

The visitors were under the cosh from start to finish and were trailing 26-0 at half-time after letting in four unanswered tries, before the Crusaders stepped up a couple of gears on attack after the break and added five further touchdowns.

The match came alive in the ninth minute when Reece opened the scoring after gathering a cross-kick from Mo’unga. Havili then crossed the whitewash in the 16th minute after gathering a brilliant pass from Jack Goodhue deep inside their own half.

It was one-way traffic during the rest of the half with the champions spending long periods camped inside the Rebels’ half and two tries from Ennor within a 10-minute period meant the home had their tails up at half-time.

The Rebels made the brighter start to the second stanza but despite spending most of the early stages inside their opponents’ half, it was the Crusaders who scored the first points after the break via a Bryn Hall try after Reece laid the groundwork in the build-up.

The demolition continued when Reece crossed for his second try shortly afterwards before got over for his hat-trick in the 57th minute. Mo’unga added the extras which gave the Crusaders a 45-0 lead and they reached a half century of points when Havili dotted down in the 61st minute.

Despite their big lead, the Crusaders continued to attack and they sealed an one-sided win with further tries from Reece and Crotty in the game’s closing stages. 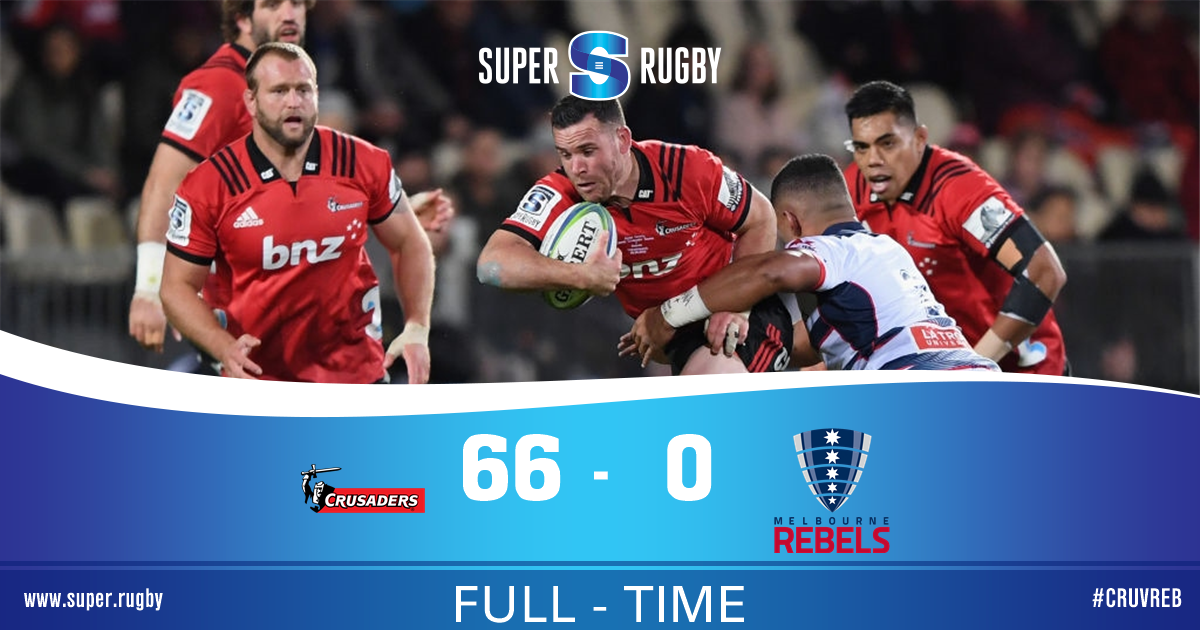