The Melbourne Rebels claimed a crucial come-from-behind 27-24 victory over the Brumbies at GIO Stadium in Canberra on Saturday evening.

The Brumbies raced in to a 21-5 lead through three first-half tries all scored by first-time Super Rugby try-scorers in Thomas Cusack, Faalelei Sione and Rob Valetini.

However, the Rebels hit back through Jack Maddocks, Semisi Tupou and a Tom English brace to end a five-match losing streak and move to within one point of Australian Conference log leaders Waratahs.

Meanwhile, the Brumbies will be kicking themselves as they missed out on an opportunity to leapfrog the Reds and move to within two points of their opposition as they lost their fourth match in succession.

The Rebels dominated the early possession and territory stakes and were rewarded with the game’s first try. After Marika Koroibete had spilled the ball in midfield, Brumbies full-back Tom Banks put the ball in behind the Rebels defence with Henry Speight bearing down on Angus Cottrell.

However, Cottrell did exceptionally well to beat Speight and two further defenders with his run down the left touchline, before the flanker played the perfect pass as he was falling to the ground which had English running on to the ball at pace and clinically finishing in the left-hand corner. Rebels fly-half Jack Debreczeni failed to convert.

The Brumbies hit back straight away through Cusack, who burst over after the home side showed good patience and found extra numbers out on the left. Fly-half Wharenui Hawera added the extras for a 7-5 lead.

Amanaki Mafi was sent to the sin-bin in the 22nd minute when he caught Brumbies prop Scott Sio with a high hit and the Rebels would pay for that. The Brumbies kicked for the corner and from the lineout, Cusack went short side and turned creator, offloading for Sione who, it must be said, ran an excellent support line before crashing over.

The Brumbies were making the most of their numerical advantage when Cusack, who was having a brilliant game, plucked a Hawera cross-kick expertly out the air. After a couple of phases, Valetini powered over. Hawera’s conversion took the Brumbies’ lead out to 21-5 a minute before Mafi returned from his stint in the naughty chair, which cost his side 14 points.

With Scott Sio having gone off, the Rebels were beginning to attack the Brumbies’ loosehead side and won the scrum penalty after replacement prop Ben Alexander was penalised for going in on the angle.

The Rebels chose the scrum and profited from their decision as Tom English grabbed his brace after good work by Koroibete to set him up with the offload after the ball was spun quickly out wide to the wing from the set-piece. Unfortunately, Rebels centre Reece Hodge missed his conversion attempt, meaning with two unconverted tries, the Rebels went in to the break trailing at 21-10.

The Brumbies camped themselves inside the Rebels’ 22 for 15 pressure-filled minutes after half-time but could only come away with a sole Hawera penalty for their efforts.

But the home side looked to be tiring when quick hands from the Rebels allowed Hodge to make his way up to the Brumbies’ 22. As the ball was recycled, Maddocks burst through a hole to run 30 metres to the line and produce a good finish as the Rebels hit back. Debreczeni’s conversion cut the deficit in half to 24-17.

Soon after, the scores were level when Rebels scrum-half Michael Ruru showed good awareness to find Tupou on the blindside after the Rebels had set up the well-worked driving maul which got them close to the line. Tupou had the easiest of run-ins to notch a try on his Super Rugby starting debut with 15 minutes to go.

With three minutes left on the clock, the Rebels were handed a gift when Brumbies’ lock Sam Carter was penalised for a high hit. Hodge slotted the all-important pressure penalty to seal a superb comeback. 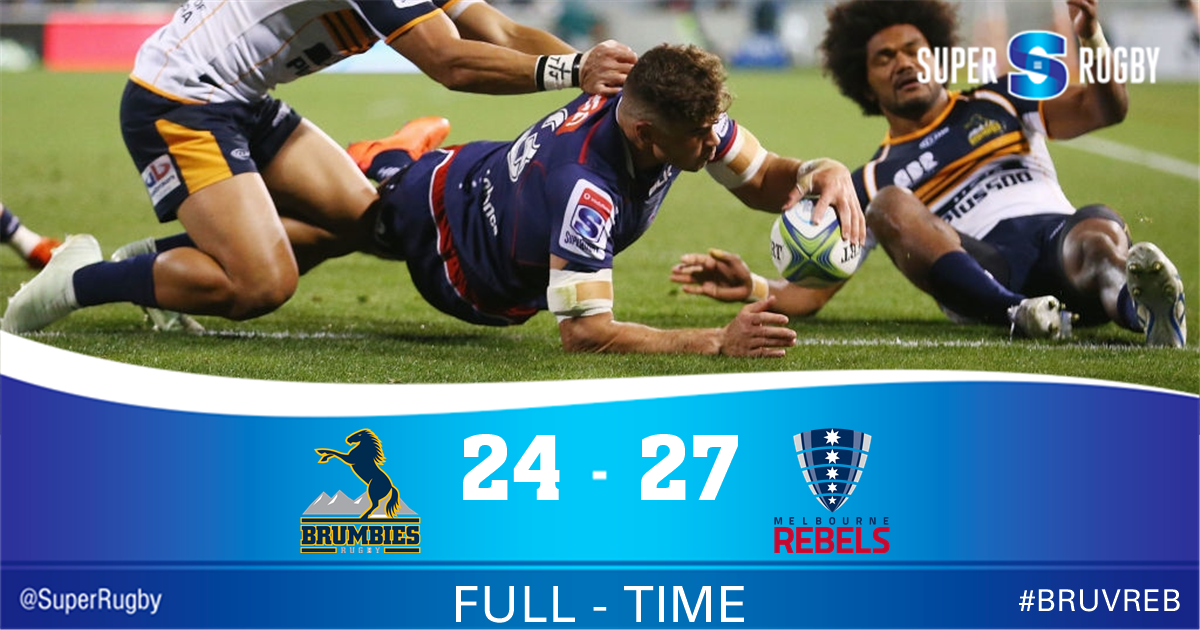