Rebels survive failing floodlights to down Western Force in Perth

The visiting Rebels looked on course for a certain victory before a late red card threw a spanner in the works, while a floodlight failure inside the stadium as the match neared its thrilling conclusion only added to the drama.

In the end, the Rebels were just about able to hold on for victory as a spirited Force fightback came up just short.

It took some time for the first points to be put on the board in the match, though it wasn't for a lack of trying.

The Rebels in particular had plenty of chances early on as they enjoyed the lion's share of both territory and possession. They came very close in the 10th minute after a messy rolling maul took the ball all the way to the Force tryline, but following a lengthy TMO review, flanker Joshua Kemeny was ruled just short.

For all the Rebels' early efforts, it was Force flyhalf Jake McIntyre who was offered the first shot at goal after the Rebels transgressed in a kickable position, but his effort was just wide and it stayed scoreless.

The Rebels nearly found the try they were looking for when a little chip over the top left the home side at sixes and sevens, but James Hanson lost the ball with the line beckoning. Luckily for him, the ball was lost backwards and it was the Force who knocked on immediately after, so the Rebels retained possession.

Given a chance to go again, the visitors made no mistake this time as they kept the ball in hand and probed for the line before a long pass out wide finally saw Lachlan Anderson crash over for their first try of the season.

The Force nearly hit back not long after when a chip kick from Byron Ralston saw the Rebels under heaps of pressure right by their own tryline, but referee Graham Cooper handed the visitors a relieving penalty - much to the crowd's displeasure.

The Force did get one more chance to attack before the end of the first half when they opted to kick for touch rather than take the points on offer, but after spending several phases camped on the opposition line, gaining several penalty advantages, the Rebels got out of jail when the ball was turned over in the maul.

The second half started in much the same way as the first, with both teams looking dangerous in spurts without being able to force the advantage. 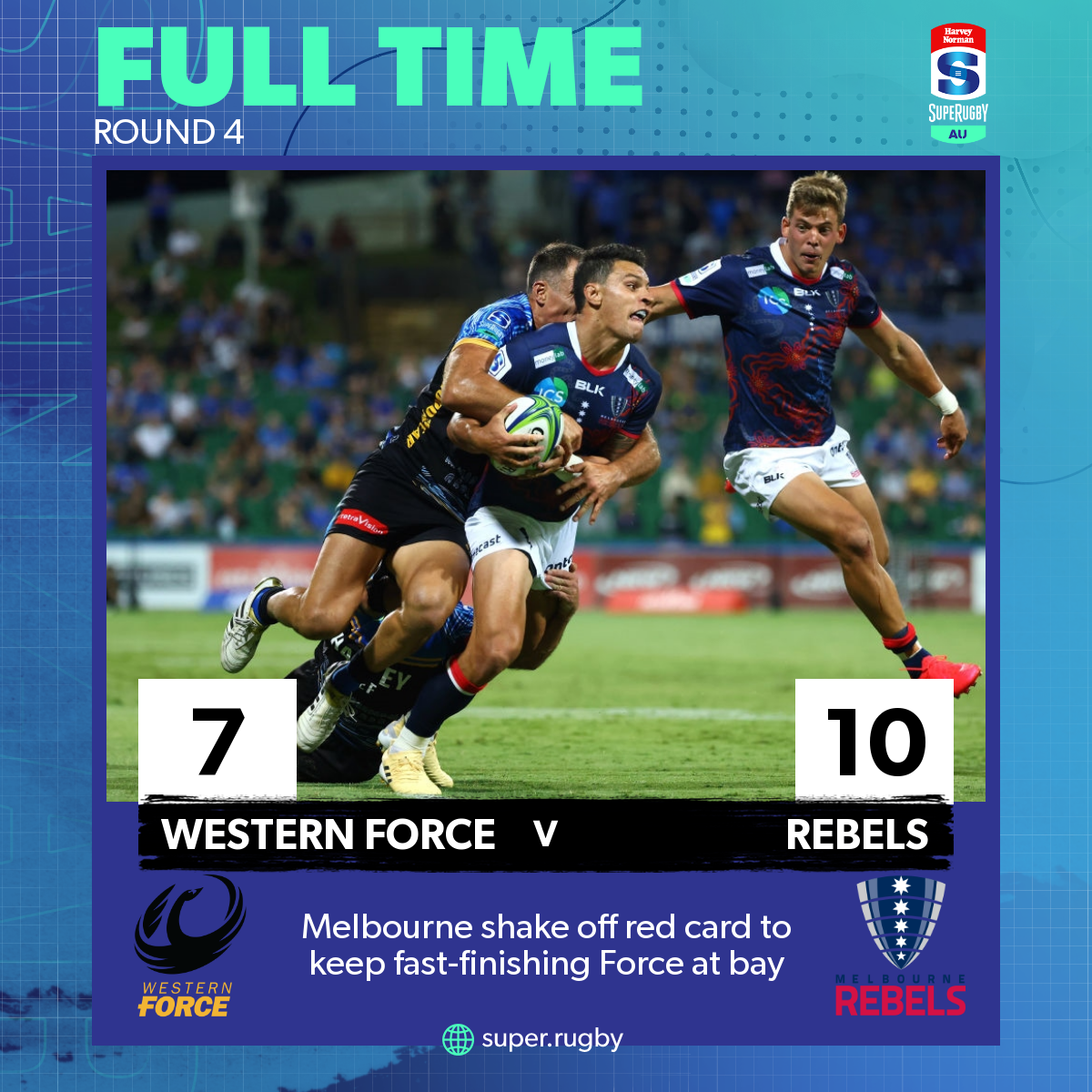 Toomua had a chance to extend the Rebels' lead in the 52nd minute but his penalty kick hit the upright and came back inside.

The game needed a spark and found it via the Rebels' dangerous winger Marika Koroibete, who nearly single-handedly sparked his side to life with two storming runs. The Rebels managed to get it all the way to the line before Force captain Brynard Stander pulled off a try-saving turnover.

The Rebels were soon back on the attack and this time there was more reward for their efforts. It was no surprise when Koroibete created the opening as he broke a few tackles before racing ahead and offloading to Joe Powell for the score in the corner. Toomua couldn't convert as the Rebels took a 10-0 lead.

That try seemed to light a fire under the Force, who finally found the spark they were looking for. After their forwards came desperately close to getting the try following a string of phases near the Rebels tryline, the backs obliged moments later as some clever hands and slick passing saw substitute Jack McGregor go over in the corner. McIntyre added the extras to reduce the deficit to just three points.

To make matters worse for the Rebels, the referee went upstairs after the try to look for suspected foul play in the build-up, and when replays showed lock Ross Haylett-Petty with a clear and dangerous high hit in the tackle, the ref had no choice but to dish out the red card.

That set up an exciting final 10 minutes with the win up for grabs, although play was briefly held up when the floodlights went off in one part of the ground. The lights never returned but thankfully the call was made to play on, with the players now casting much longer shadows.

The Force had a scrum in opposition territory as play restarted and only some desperate try-line defence from the Rebels stopped the home side from scoring again.

It was all defence from the Rebels now as they still found themselves a man down, but when the Force earned a penalty in a kickable position, they opted to try and exploit their numerical advantage by taking the scrum. That led to a huge call from the ref, who penalised the home side for collapsing, allowing the Rebels to escape once again.

As the siren blew, the Rebels only had to kick it out as they held on for the narrow three-point win despite a valiant late effort from the Force.