Rebels survive two red cards to down Waratahs in Sydney

The Rebels saw two red cards but still managed to finish the season on a high as they hung on for a 36-25 victory over the Waratahs in Sydney.

While the match was effectively a dead rubber following the Western Force's win over the Reds on Friday, neither side lacked commitment during the high-scoring encounter, which finally went the visitors' way with four tries to three.

The result means the Tahs finish the Super Rugby AU season winless despite some encouraging signs late in the season, while the Rebels end up just shy of a playoff spot, two points behind the Force in third place.

It took just 35 seconds for the Rebels to open the scoring after Frank Lomani found some space straight from the kick-off, taking them all the way into the red zone before Matt To'omua produced a perfectly weighted crossfield kick for Stacey Ili, who only had to make the catch and crash down in the corner.

The Waratahs were quick to hit back after forcing a turnover near the touchline and earning a penalty right in front, giving Ben Donaldson a chance to reduce the deficit from the kicking tee.

When the flyhalf was given another chance to kick at goal following another solid spell of possession for the Tahs in Rebels territory, he made no mistake to bring them within one point of the lead.

But the visitors were soon in for their second try following a powerful scrum on the Tahs 22, with Isi Naisarani peeling off from the back and running straight through some ragged defence before handing off to flanker Michael Wells for the easy run-in.

To'omua missed the conversion but was given a shot right in front moments later when the Tahs strayed offside as the Rebels opened up a nine-point lead.

That led to a big moment in the match when Isi Naisarani hit Max Douglas with a high shot to the head, causing a scuffle amongst the players with Naisarani again heavily involved, giving the TMO no choice but to hand the Rebels No 8 a red card.

But despite being down a man, it was the Rebels who scored next when they worked their way towards the line and earned several penalty advantages, with To'omua eventually taking the three points on offer.

The Waratahs finally made their one-man advantage count shortly after thanks to some great work from Izaia Perese, who sucked in several defenders before pulling off a superb offload to Mark Nawaqanitawase for the try.

Much to the dismay of the fans in the stadium, however, the Tahs infringed straight from the restart to hand three points back to the Rebels.

Back came the Tahs, as more great pressure on the Rebels line saw fullback Jack Maddocks go over for their second try. Donaldson nailed the conversion from out wide as the Waratahs finished the half just three points back.

The Rebels came out firing after the break, with a strong rolling maul carrying them up towards the Tahs line before Robert Leota peeled off and shrugged off the defender for the score.

But the hosts hit back on 48 minutes when David Porecki bashed his way over from a ruck right on the Rebels line. Donaldson added the extras to get them back to within three.

The Tahs continued to give away points as soon as they scored some them, however, handing To'omua a kick right in front after an infringement at the scrum.

And with just under 15 minutes to go, the Rebels scored a potentially decisive try after several assaults on the Waratahs line, with Matt Gibbon crashing over from close range to put the visitors 11 points clear.

There was drama in the final 10 minutes as the Tahs spent several minutes camped in the Rebels 22, finally leading to a yellow card to James Hanson for repeated infringements - and then a second red card not long after to Pone Fa'amausili for another high shot to the head.

That reduced the Rebels to just 13 men with five minutes to play, but try as they might the Waratahs couldn't make their superior numbers count, as the Rebels held on for the win. 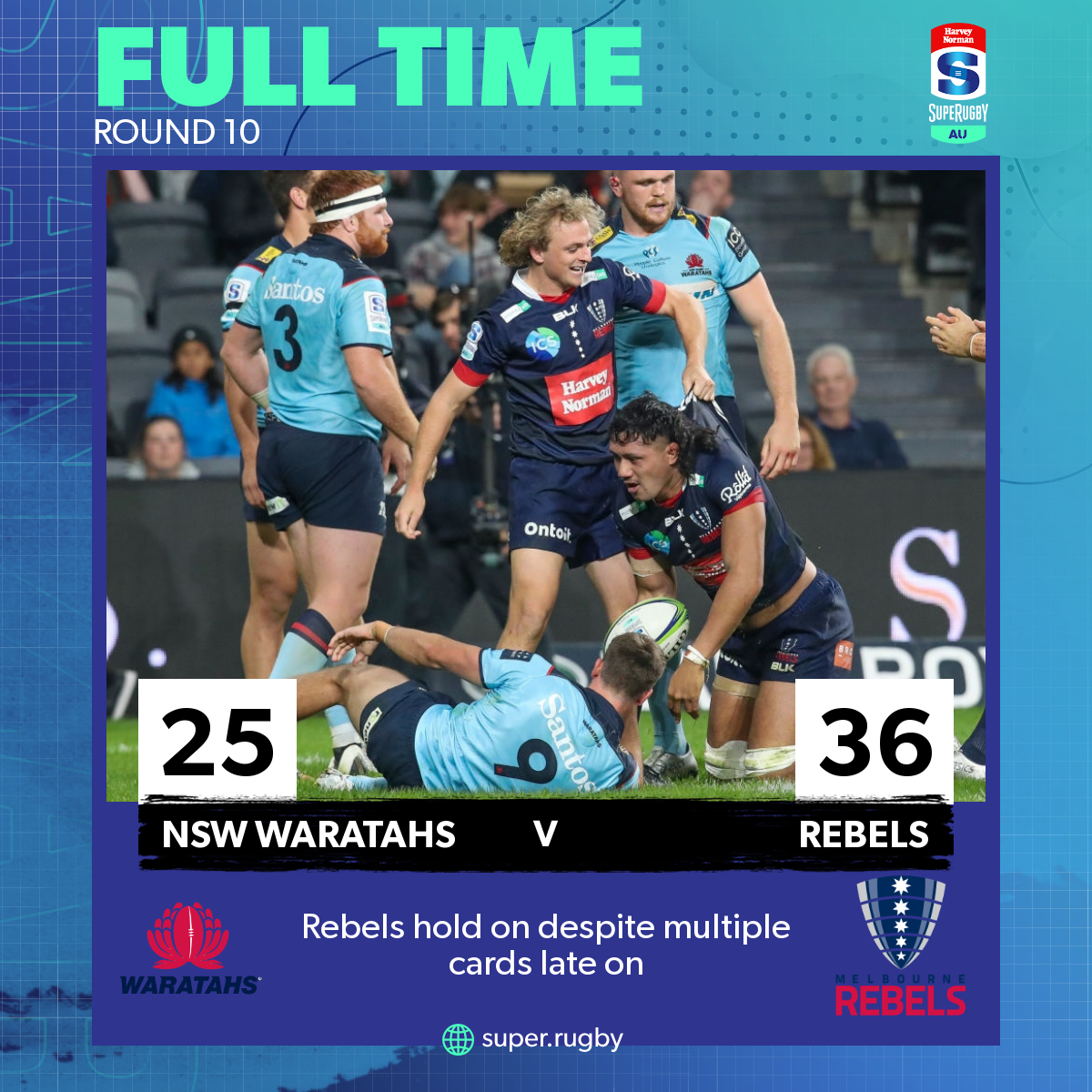