Reds and Rebels battle to a draw

The Rebels and the Reds fought to a 18-all draw on Friday in Sydney in their Super Rugby AU clash.

Although the Rebels held the upper-had for most of the match, the Reds came back strongly during the latter stages and clinched the draw in the 79th minute when Alex Mafi crossed for a converted try.

The match went into Super Time – one of seven rule changes for the Australian tournament – in which the teams played two five-minute halves to separate them, with the first side to score points during this period being declared the winners, but neither side managed to do that.

The Reds had an opportunity to win the game just before the end of the first period of Super Time but Bryce Hegarty’s penalty attempt, from 50 metres out, was wide of the mark.

In the end, both sides crossed for two tries apiece with Reece Hodge and Bill Meakes scoring the Rebels’ five-pointers while Matt Toomua kicked a conversion and two penalties.

For the Reds, Mafi and Filipo Daugunu crossed the whitewash and James O’Connor added eight points courtesy of a couple of penalties and a conversion.

The match kicked off with heavy rain pelting down and the atrocious weather conditions meant that no tries were scored during the opening half.

The Rebels had the better of the early exchanges and Toomua opened the scoring with a penalty in the seventh minute after Taniela Tupou strayed offside on defence.

The rest of the half was a scrappy affair as both sides opted for a ball-in-hand approach but, due to the unpleasant conditions, both teams made several errors.

In the 17th minute, the Rebels came close to scoring the opening try when Toomua launched a chip kick inside the Reds’ 22 but the ball bounced awkwardly for Marika Koroibete, who failed to gather with the try-line begging.

Shortly afterwards, the Reds had a rare foray into the Rebels’ half of the field when Hunter Paisami made a superb line break but he lost his footing as he was about to pass to Filipo Daugunu, who was in the clear on his outside.

The Rebels held the upper-hand during the rest of the half and came close to scoring on several occasions. During the half’s latter stages, Richard Hardwick dotted down in the left-hand corner but his effort was disallowed when television replays revealed that he put a foot in touch before scoring.

On the stroke of half-time, the Reds were reduced to 14 men when Hamish Stewart was yellow carded for a breakdown offence inside his 22. Toomua slotted the resulting penalty which gave his side a 6-0 lead at the interval.

Despite their numerical disadvantage, the Reds scored the game’s first try shortly after the restart when Daugunu gathered a long pass from James O’Connor close to the Rebels try-line and he did well to step past a couple of defenders before crossing the whitewash.

That try was a shot in the arm for the Reds and in the 51st minute O’Connor succeeded with a long-range penalty which gave his side an 8-6 lead. They did not hold that for long though as the Rebels struck back three minutes later when Hodge scored their first try after Koroibete and Dane Haylett-Petty combined brilliantly in the build-up.

Soon after, the Reds were dealt another blow when Paisami was also sent to the sin bin for an illegal hit on Koroibete but they did well not to concede any points during his stint on the sidelines.

The Reds upped the ante on attack in a bid to win the game but were dealt a massive blow in the 68th minute when Meakes crossed for his side’s second try. This, after gathering a wayward pass from O’Connor just inside the Reds’ half, and he duly outpaced the cover defence before scoring his five-pointer.

Toomua’s conversion gave his side an 18-8 advantage before O’Connor narrowed the gap to seven points courtesy of a penalty in the 75th minute. That set up an exciting finish in regular time and the Reds continued to run the ball from all areas of the field.

That approach proved successful as just before the full-time hooter Chris Feauai-Sautia launched an attack from inside his half and beat several defenders before offloading to Mafi inside the Rebels’ 22. The burly hooker still had plenty to do but did well to race away before dotting down. O’Connor added the extras which drew his side level and the game went into Super Time.

Neither side came close to crossing the whitewash during Super Time and, when the Reds had their chance to score points, Hegarty lined up his penalty from the halfway line. Although his kick had the distance, it was off target and that meant the teams had to settle for a draw. 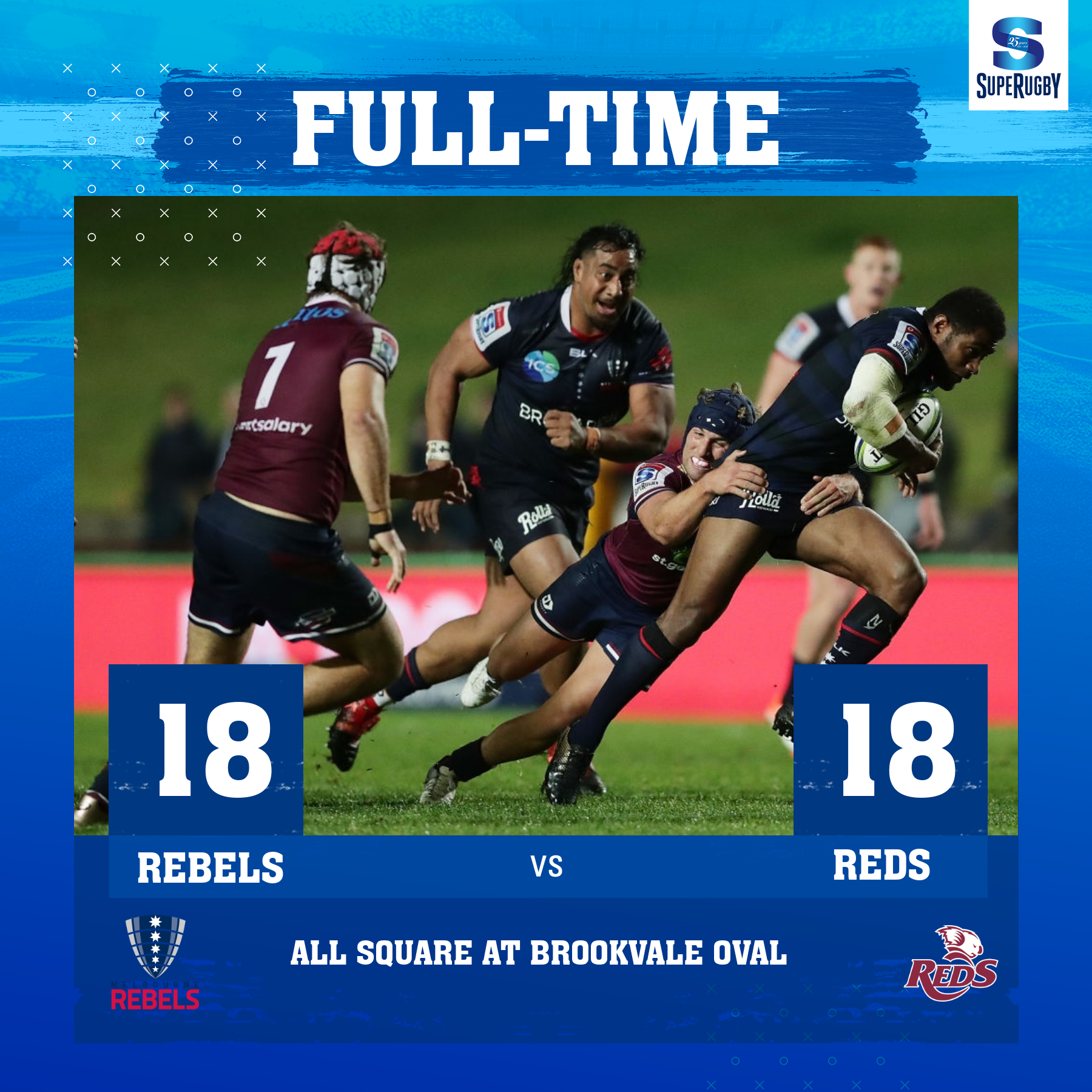