Reds come from behind to sink Sunwolves

The Reds claimed a 32-26 come-from-behind victory over an indisciplined Sunwolves side at Suncorp Stadium in Brisbane on Friday.

It is the second consecutive match against the Sunwolves in which the Reds have had to come from behind to win. The Sunwolves will be ruing the fact that they received five cards from referee Angus Gardner in the match (four yellows and one red).

Brad Thorn's side jump up from fourth in the Australian conference to second, while the Sunwolves are now nine points adrift of fourth-placed Brumbies.

The Sunwolves took an early lead through a Hayden Parker penalty goal after Brandon Paenga-Amosa was penalised for hands in the ruck. It was an end-to-end game with both sides playing attacking ball-in-hand rugby and it made for an entertaining spectacle.

Parker doubled the lead in the ninth minute with another three-pointer after Izack Rodda was blown up for offside.

Both sides were guilty of moving off their defensive line too quickly as the visitors were this time culpable of infringing. Bryce Hegarty slotted the penalty to halve the deficit.

The hosts scored the game's first try in the 14th minute. Scott Higginbotham intercepted Hendrik Tui's pass and was brought down ten metres out but managed to get a brilliant offload away while falling to the ground for Hegarty, who had enough pace to evade Rahboni Warren-Vosayaco and finish in the corner.

The Sunwolves responded five minutes later. Parker put a lovely grubber-kick through with his right foot and Gerhard van den Heever timed his run perfectly to finish in the right-hand corner. The Kiwi fly-half added the extras to make it 13-8.

However, the men from Tokyo suffered a blow soon after restoring their lead when they were reduced to 14 men with Gardner losing his patience with their repeated infringements as loosehead prop Masataka Mikami was yellow-carded for coming in from the side.

Having just had Mikami return to the field, the Sunwolves went down to 14 men for the second time in the match. Jock Campbell intercepted and made a scintillating break downfield. With the visitors' defence stretched, Semisi Masirewa cynically put his hands in the ruck and was sin-binned for his indiscretion.

Despite enduring some heavy pressure from the Reds in the closing stages of the first half, the Sunwolves managed to hold on to their 13-8 lead going in to the interval.

The visitors took the lead shortly after half-time. Samu Kerevi made the break to put his side on the attack before giving the ball to Campbell. Van den Heever made the tackle but Taniela Tupou was able to power his way over the try line. Hegarty made no mistake with the conversion to give the Reds a 15-13 lead.

Soon after, Parker restored the Sunwolves' lead with his third penalty goal of the game. However, the visitors were permanently reduced to 14 men when Masirewa was given his second yellow card in the match and a subsequent red for a high tackle on Campbell.

This left the Japanese side's defence stretched as the home side immediately capitalised on their numerical advantage. After making inroads down the right wing, the ball was swung to the left before Hegarty produced an inch-perfect cross-field kick for Sefa Naivalu to saunter over in the left-hand corner. Hegarty converted for a 22-16 lead.

Hegarty extended the home side's lead to 25-16 in the 58th minute with a penalty goal after the Sunwolves were penalised for holding on. But soon afterwards, Parker put the visitors back in touching distance with another well-struck penalty goal.

Such was the Reds' dominance in the second half that they were enjoying 75 percent in by the hour mark. However, against the run of play and with 14 men, Van den Heever intercepted Hamish Stewart's suicidal pass to run in under the posts from 30 metres out. Parker slotted the resulint conversion between the posts for a 26-25 lead with just under ten minutes to go.

Soon after, the visitors were reduced to 13 men when Yu Tamura was sin-binned for being way offside after Gardner had previously warned the Japanese side about their repeated offside infringements.

From the resulting penalty, the Reds kicked for touch, set up the lineout and drove towards the line from a rolling maul with Paenga-Amosa touching the ball down at the base of the post as Hegarty added the extras for a 32-26 lead.

More cards were dished out in an ill-disciplined game as Harry Hockings was given a red card for stamping on the head of Warren-Vosayaco, who himself got a yellow for holding the Reds lock back.

Despite a late onslaught from a brave 12-man Sunwolves side, the Reds held on for a crucial victory. 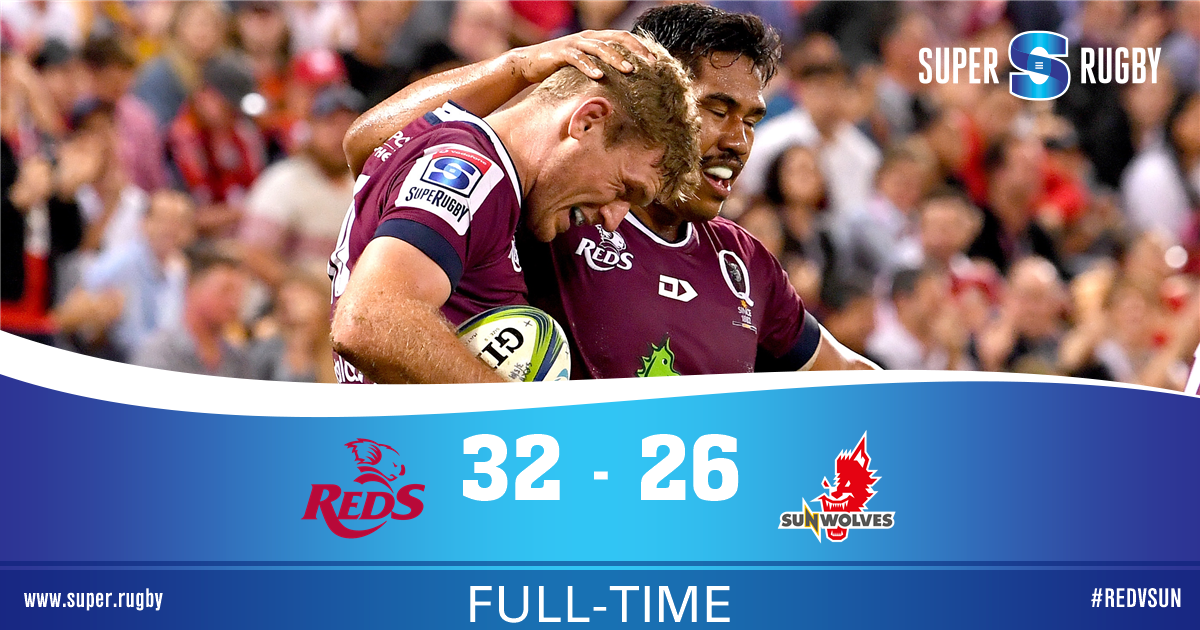